The Democratic Party will maintain a majority in the Senate. Sen. Catherine Cortez Masto (D-NV) defeated Republican challenger Adam Laxalt to give the Democrats the needed 50 seats for a majority.

For Context: There is still one seat up for grabs in Georgia, where incumbent Sen. Raphael Warnock (D) and challenger Herschel Walker (R) are headed for a runoff election on Dec. 6. If Warnock wins, the Democratic majority will increase to 51 seats. If Republicans win, the Senate will again be split 50-50, and Vice President Kamala Harris (D) will be the tie-breaking vote.

How the Media Covered It: Election coverage has dominated headlines across the spectrum all week. Coverage is framing the Democrats retaining control of the Senate as a large upset, with more coverage focusing on the Republican’s defeat than the Democrat’s victory. NewsWeek stated it “defied historic odds.” Breitbart News and CNN both called Masto, whose victory clinched the Senate, “one of the most vulnerable” incumbent Senators in the nation. 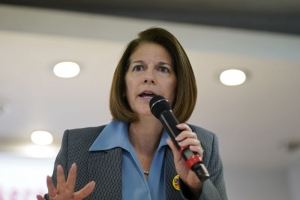 Democratic Sen. Catherine Cortez Masto will win reelection in Nevada, CNN projects, clinching a critical victory that will allow Democrats to keep control of the US Senate.

Cortez Masto had long been viewed as one of the most vulnerable Democratic incumbents as she fended off a challenge from former Nevada Attorney General Adam Laxalt in a state whose economy had been hard hit by the Covid-19 pandemic and inflation.

With Cortez Masto – the first Latina senator – securing a second term, Democrats will hold 50 seats and Republicans will... 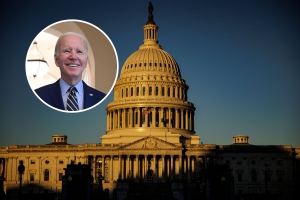 Democrats kept control of the Senate on Saturday after Catherine Cortez Masto won re-election in Nevada, repelling Republican efforts to retake the chamber.

The Associated Press called Nevada for Cortez Masto on Saturday, projecting that Republican opponent Adam Laxalt—backed by former president Donald Trump—could not make enough gains to win in one of the most competitive races of the midterm elections.

Masto's victory allows Democrats to retain control of the Senate with at least 50 seats because of Vice President Kamala Harris' tiebreaking vote, making it harder for Republicans to... 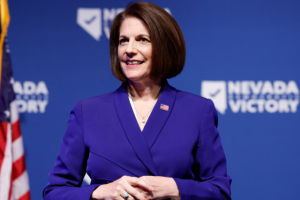 The race results come after several days of delayed mail-in ballot counting — Cortez Masto secured a win with just under 5,000 votes by the time the Associated Press called the race, with 48.7 percent for Cortez Masto and 48.2 percent for former Nevada Attorney General Adam Laxalt.

With Democrat Sen. Mark Kelly’s win in Arizona, Democrats will now hold a 50-49...