Learn more about Lean Left ratings
Go to CBS News (Online)
No Paywall
Our records indicate that content from this source is free to access. If this is incorrect, please email us to let us know.
Contents

Note: AllSides rates the bias of online media only, not print, television, or radio content.

On average, people across the political spectrum rated CBS news as Lean Left in our April/May 2021 Blind Bias Survey. 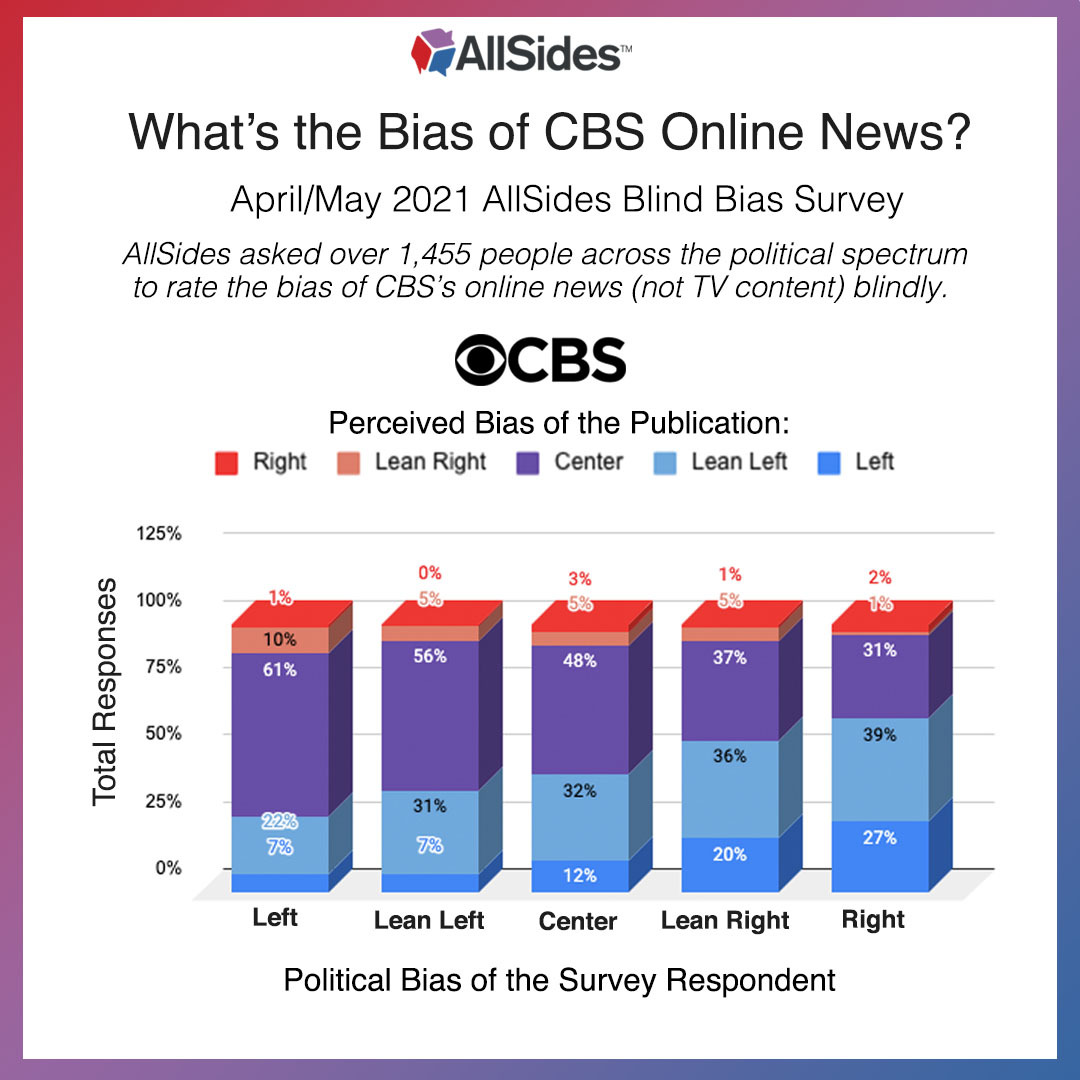 A total of 1,053 people rated the bias of CBS in this survey. The average rating for CBS News from people across the political spectrum — people who identified as Left, Lean Left, Center, Lean Right, or Right — was Lean Left.

Among the groups of people who self-identified as Left, Lean Left, Center, or Lean Right, a plurality of respondents rated CBS News as Center. A plurality of respondents who rated themselves as Right rated CBS News as Lean Left. The second most common response for CBS from people with a Right bias was Center; the second most common response from people from all other bias groups was Lean Left.

As of December 2022, people have voted on the AllSides Media Bias Rating for CBS News (Online). On average, those who disagree with our rating think this source has a Lean Left bias.

As of December 2022, AllSides has medium confidence in our Lean Left rating for CBS News (Online). Two bias reviews have affirmed this rating or multiple reviews have returned differing results. If we perform more bias reviews and gather consistent data, this confidence level will increase.

In the 2008 election, CBS employees, along with the employees of two other two major broadcast television networks, donated $1,020,816 to the Democratic Party, while donating $142,863 to the Republican Party, according to an analysis by The Washington Examiner of data compiled by the Center for Responsive Politics. (AllSides does not factor this data into its media bias ratings for these networks, but provides them as an FYI to our readers).

CBS news is owned by ViacomCBS. ViacomCBS “has operations in virtually every field of media and entertainment, including broadcast television, cable television, local television, radio, advertising, publishing, music and motion pictures.” Bob Bakish is the president and CEO of ViacomCBS. CBS is publicly traded.

This content was curated by AllSides. See our Balanced Newsfeed.
NewsDecember 8th, 2022
FDA says some young kids can't get an updated COVID booster until next year
CBS News (Online)