Learn more about Center ratings
Go to NewsNation
No Paywall
Our records indicate that content from this source is free to access. If this is incorrect, please email us to let us know.
Contents

NewsNation is featured on the AllSides Media Bias Chart™.

NewsNation is a news media source with an AllSides Media Bias Rating™ of Center.

An AllSides September 2022 Small Group Editorial Review returned a bias rating of Center for NewsNation. All panelists observed a mostly balanced story choice that covered topics of interest to both the right and left. However, a reviewer on the left said they saw the outlet as leaning a bit to the right in its story choice.

Panelists did not observe the use of spin, slant, or sensationalism in headlines, which were straightforward and factual:

Stories about immigration and the border were labeled “Border Report,” which was seen as a neutral word choice (as opposed to terms that would convey a viewpoint, such as “Immigration Crisis”). A panelist from the center and a panelist from the right noted that some analysis pieces, such as this article on the COVID-19 pandemic (which was seen as a Lean Right viewpoint) and this piece on Hispanic voters were not clearly labeled as analysis.

NewsNation was rated on the border of Center and Lean Left in the Aug. 2022 AllSides Blind Bias Survey. AllSides rated NewsNation as Center at the time. The results triggered a Small Group Editorial Review, in which the team opted to keep NewsNation's rating Center.

A total of 901 people from across the political spectrum – people who identified as Left, Lean Left, Center, Lean Right, or Right – rated the bias of NewsNation. The weighted average was -1.04, which is on the border of Lean Left and Center. The middle 50% of responses lied between -2.09 (Lean Left) and -0.36 (Center) – an interquartile range of 1.73. 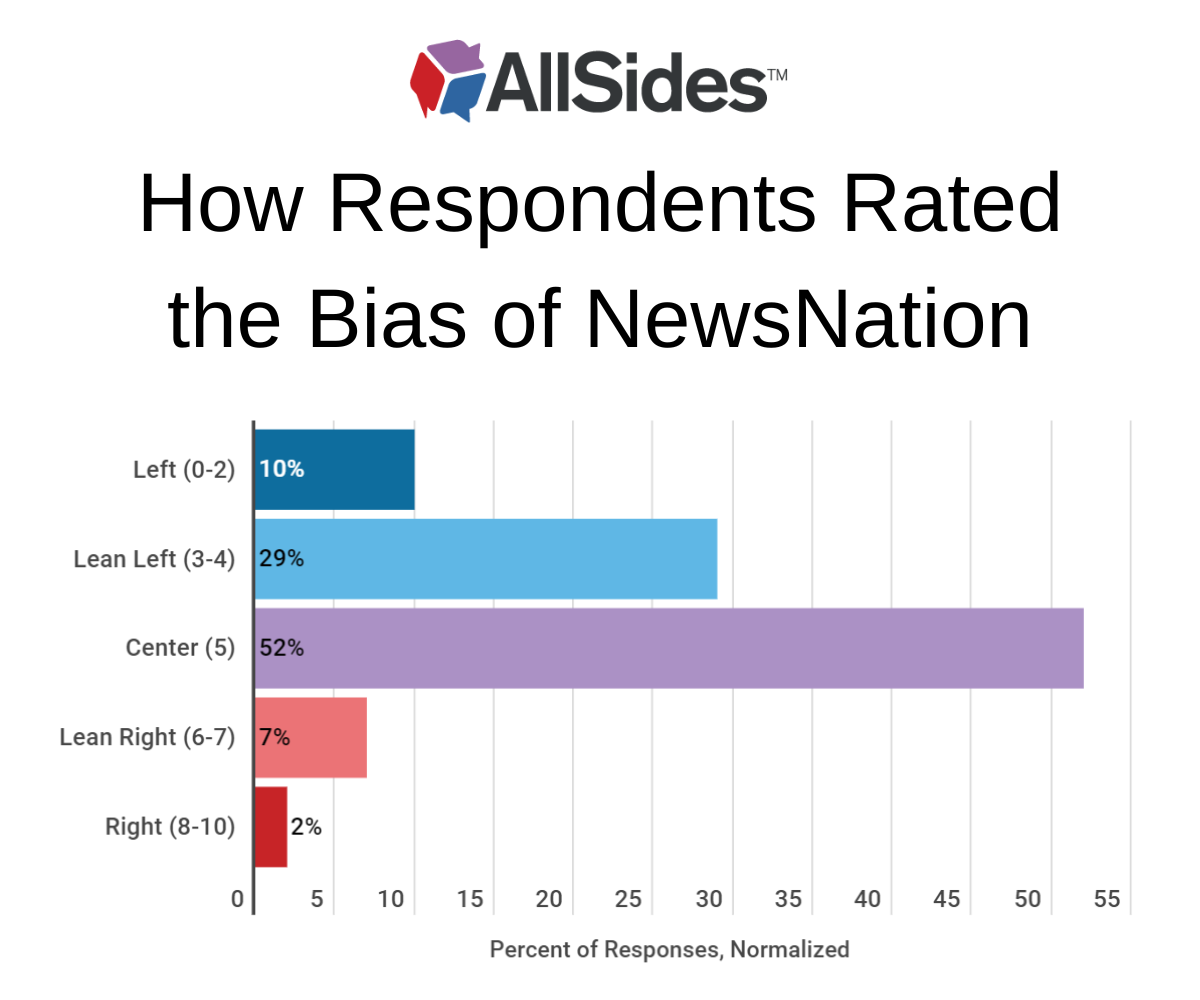 During an AllSides Blind Bias Survey, people from all sides of the political spectrum and a diverse array of ages and geographic locations rate the bias of content from a media outlet blindly, meaning all identifying branding information is removed. Sign up for a Blind Bias Survey here.

Overall, we found little evidence that NewsNation's bias pushed more to the left or the right overall. The team found:

As of December 2022, people have voted on the AllSides Media Bias Rating for NewsNation. On average, those who disagree with our rating think this source has a Center bias.

As of December 2022, AllSides has low or initial confidence in our Center rating for NewsNation. If we perform more bias reviews and gather consistent data, this confidence level will increase.

The Variety article cites sources familiar with internal meetings and says Nexstar chairman-CEO Perry Sook "told staffers that the goal from the start was to produce a telecast that reflects centrist views. As such, NewsNation would naturally lean more to the right than other mainstream news outlets because, in Sook’s view, the political perspectives of journalists in most newsrooms lean to the left."

Variety further stated, "Another source at NewsNation blasted the criticism, arguing that there was no movement from the pledge to offer down-the-middle news headlines outside of shows specifically designed for more opinion and commentary."

NewsNation was formerly known as Superstation WGN and WGN America. On March 1, 2021, the channel was relaunched from WGN America to NewsNation with expanded programming.

According to a press release, as of Jan. 2021, WGN was reaching 75 million U.S. television households.

NewsNation bills itself as unbiased. During the launch of NewsNation, Sean Compton, Nexstar Inc.’s Networks Division President, said, “Rebranding WGN America as NewsNation underscores the network’s clearly defined mission of delivering fact-based and unbiased news, while making it easier for viewers to find this new informative source for news."