Learn more about Lean Left ratings
Go to New York Times (News)
Possible Paywall
Some content from this source may be limited or behind a paywall.
Contents

A total of 706 people across the political spectrum took the survey. The normalized average for New York Times was -1.32 on a scale from -9 to +9, with 0 representing Center. That average is in the Lean Left category. 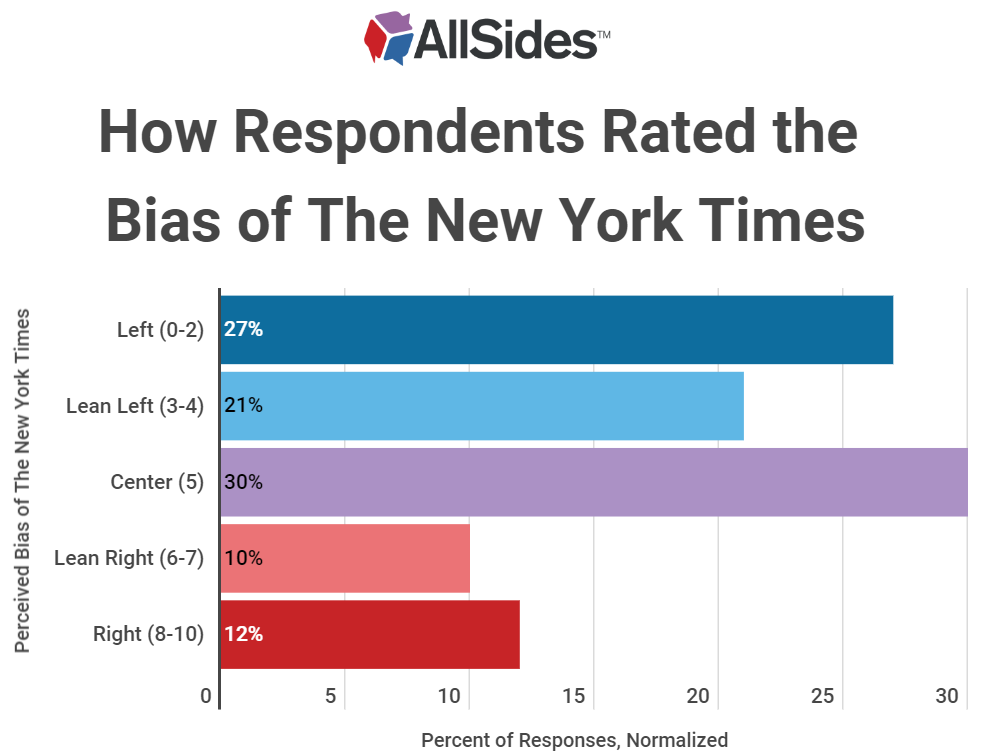 Notably, the perception of the New York Times' bias differed based on where the respondent lives. New York City metro area residents were more likely to say New York Times is Center.

This underscores that bias is in the eye of the beholder. There are more liberals/Democrats in New York City, and their perception of New York Times’ bias is that it is Center, because its bias more closely matches their own beliefs.

The New York Times fact check section has a Lean Left bias, according to a July 2021 Small Group Editorial Review by AllSides editors on the left, center, and right.

The New York Times was accused of spreading disinformation in early 2021 after its story about a Capitol police officer being beaten to death with fire extinguisher story turned out to be untrue, after spreading rapidly through the press following the Jan. 6 Capitol breach. The incident has led some to accuse the New York Times of misinformation and fake news.

In January 2021, The New York Times reported on the death of officer Brian D. Sicknick, a Capitol police officer who responded to the Jan. 6 Capitol breach. The New York Times initially said that Sicknick was “struck by a fire extinguisher,” citing two unnamed law enforcement officials. But The New York Times updated their initial report a month later, adding a disclaimer: "New information has emerged regarding the death of the Capitol Police officer Brian Sicknick that questions the initial cause of his death provided by officials close to the Capitol Police." The headline has also been changed to “Capitol Police Officer Dies From Injuries in Pro-Trump Rampage.”

The story was finally laid to rest when a medical examiner ruled in April that Sicknick died of natural causes and did not find any evidence of internal or external injuries.

The original Times article was headlined, “He Dreamed of Being a Police Officer, Then Was Killed By a Pro-Trump Mob.”

The Times described the purported event: “Then on Wednesday, pro-Trump rioters attacked that citadel of democracy, overpowered Mr. Sicknick, 42, and struck him in the head with a fire extinguisher, according to two law enforcement officials. With a bloody gash in his head, Mr. Sicknick was rushed to the hospital and placed on life support. He died on Thursday evening.”

Some accused the New York Times of intentional disinformation to make the riots look more deadly than they were. Others see it as an honest mistake made in the midst of a chaotic event (which would make it misinformation, rather than disinformation). Also questioned is whether the Times adequately alerted readers to its correction of the error.

Related: Facts vs Myths: Did a Pro-Trump Mob Beat a Cop to Death?

The average bias rating for The New York Times across all survey respondents — liberals, centrists, and conservatives — was Lean Left. 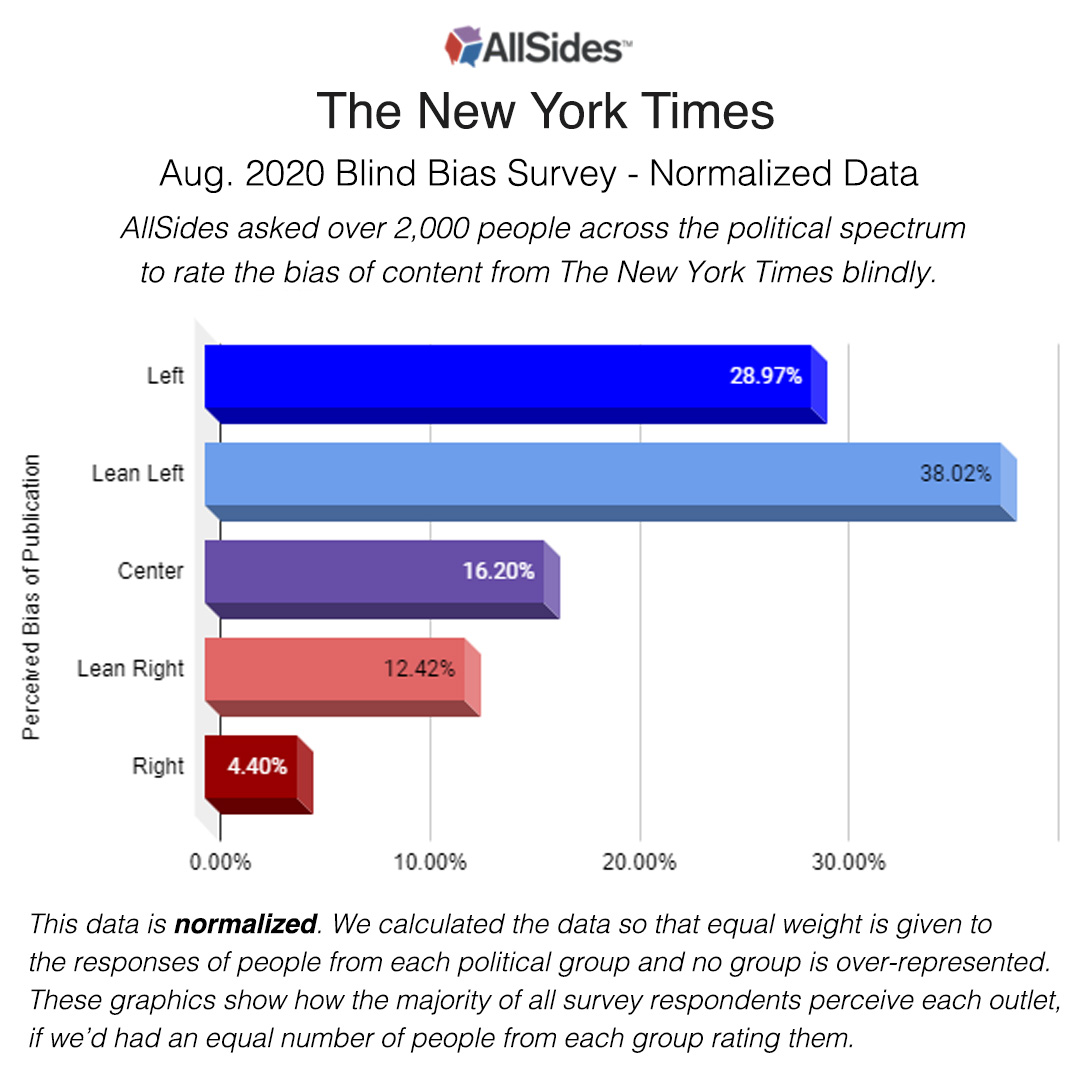 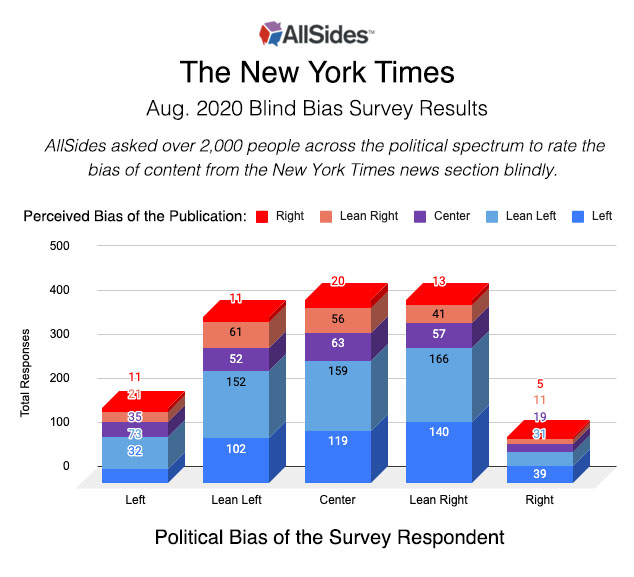 Results from a March 2013 Blind Survey by AllSides confirmed The New York Times has a Lean Left bias.

A 2005 study by UCLA found The New York Times news section has a left-wing bias.

A 2007 survey conducted by Rasmussen Reports found that 40% of survey respondents believed the New York Times had liberal bias, 20% thought it had no bias, and 11% believed it to be conservative.

As of December 2022, people have voted on the AllSides Media Bias Rating for New York Times (News). On average, those who disagree with our rating think this source has a Lean Left bias.

As of December 2022, AllSides has high confidence in our Lean Left rating for New York Times (News). Three or more bias reviews have affirmed this rating or the source is transparent about bias.

The New York Times was founded in 1851 by Henry Jarvis Raymond and George Jones and has been published continuously ever since. The newspaper is ranked 2nd in circulation in the U.S. and 17th in the world. The paper has won 125 Pulitzer Prizes, more than any other news organization. The Sunday New York Times has an average print circulation of over 1.1 million papers.

In 2004, Daniel Okrent, the then-public editor of The New York Times, wrote an editorial in which he explained that when covering some social issues, such as abortion and same-sex marriage, the paper did in fact have a liberal bias.

The New York Times public editor (ombudsman) Elizabeth Spayd wrote in 2016 that "Conservatives and even many moderates, see in The Times a blue-state worldview."

Times public editor Arthur Brisbane wrote in 2012, "When The Times covers a national presidential campaign, I have found that the lead editors and reporters are disciplined about enforcing fairness and balance, and usually succeed in doing so. Across the paper's many departments, though, so many share a kind of political and cultural progressivism — for lack of a better term — that this worldview virtually bleeds through the fabric of The Times."

Times executive editor Dean Baquet stated, "We have to be really careful that people feel like they can see themselves in The New York Times. I want us to be perceived as fair and honest to the world, not just a segment of it. It's a really difficult goal. Do we pull it off all the time? No.""

Since Eisenhower ran for president in 1956, the New York Times has not endorsed a single Republican nominee for president, but has endorsed every other Democratic candidate.