Learn more about Lean Left ratings
Go to NBC News (Online)
No Paywall
Our records indicate that content from this source is free to access. If this is incorrect, please email us to let us know.
Contents

NBC News bias is Lean Left. AllSides finds that NBC News' reporting is consistent with a Lean Left bias; its reporting often omits right-leaning perspectives and generally has a leftward bent, focusing on topics of importance to the left.

NOTE: This media bias rating only refers to the online news at NBCNews.com, NOT NBC broadcast TV content.

Democrats, Independents, and Republicans all rated the bias of NBC News as Lean Left, on average. 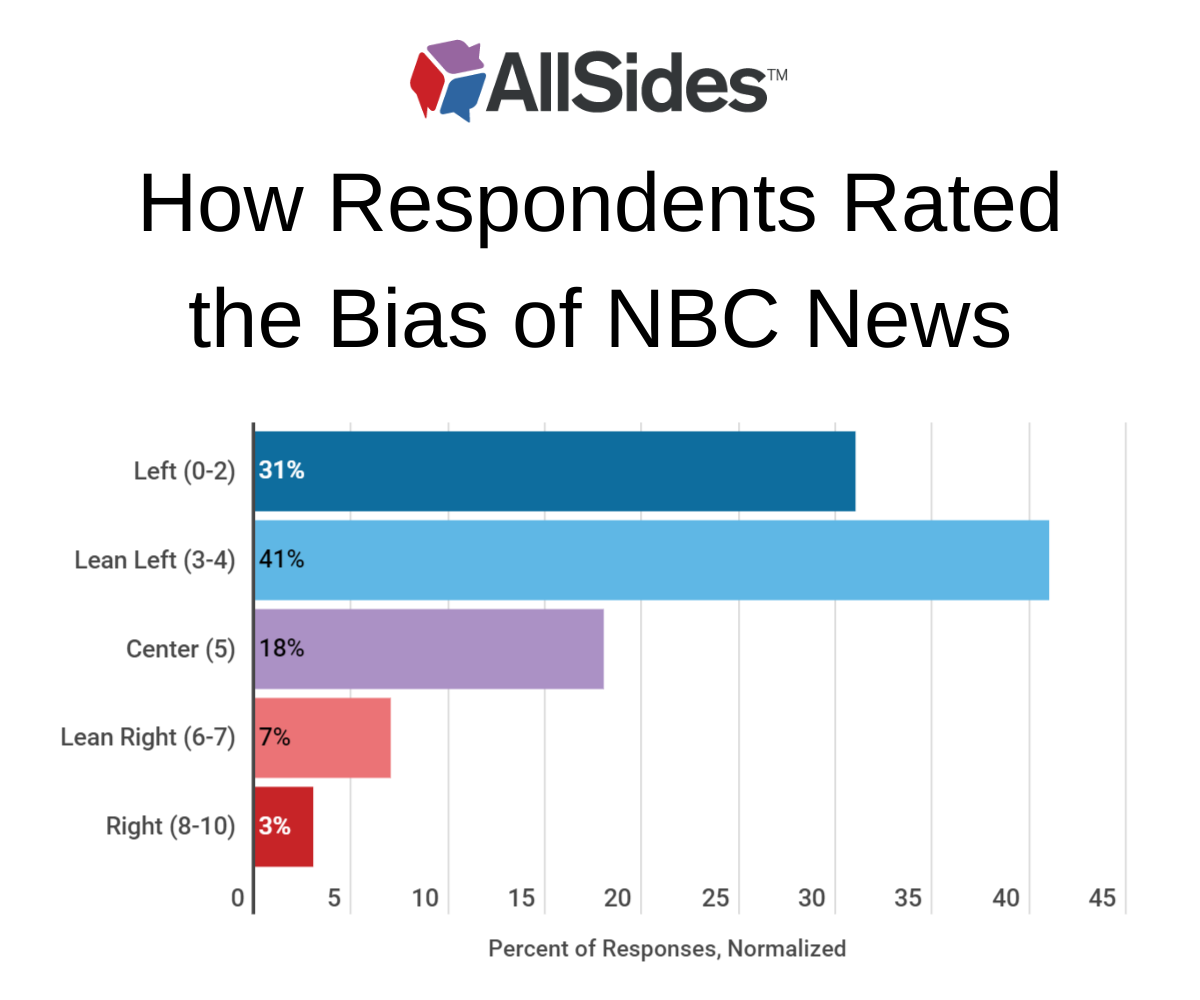 During an AllSides Blind Bias Survey, people from all sides of the political spectrum and a diverse array of ages and geographic locations rate the bias of content from a media outlet blindly, meaning all identifying branding information is removed. Sign up for a Blind Bias Survey here.

As of January 2023, people have voted on the AllSides Media Bias Rating for NBC News (Online). On average, those who disagree with our rating think this source has a Lean Left bias.

As of January 2023, AllSides has medium confidence in our Lean Left rating for NBC News (Online). Two bias reviews have affirmed this rating or multiple reviews have returned differing results. If we perform more bias reviews and gather consistent data, this confidence level will increase.

NBC News is the news division of the American broadcast company network NBC. The division under NBC Universal News Group, a subsidiary of media conglomerate NBC Universal. The group's various operations report to the president of NBC News. The company was founded in 1926 for radio, and the first news program in American broadcast television history aired on February 21, 1940. The group's broadcasts are produced and aired from Rockefeller Center, NBC's headquarters in New York City. Meet the Press is the longest-running television series in American history.

According to a 2014 Pew Research Study, Where News Audiences Fit on the Political Spectrum, 26% of NBC News consumers are mostly liberal; 36% have mixed views, 14% are mostly conservative and 5% are consistently conservative. NBC News's ideological composition overall "largely mirrors that of the broader public, though conservatives are somewhat underrepresented in its audience relative to their share of all respondents," Pew notes.

In the 2008 election, NBC News — along with ABC and CBS, two other major broadcast television networks — donated a total of $1,020,816 to the Democratic Party, given by 1,160 employees from all three organizations, according to an analysis by The Washington Examiner of data compiled by the Center for Responsive Politics. Only 193 donations were made to the Republican Party, totaling $142,863.

At least 7 people are killed in a mass shooting in Half Moon Bay, California
NBC News (Online)