Learn more about Lean Right ratings
Go to Washington Times
Possible Paywall
Some content from this source may be limited or behind a paywall.
Contents

Washington Times is featured on the AllSides Media Bias Chart™.

Washington Times is a news media source with an AllSides Media Bias Rating™ of Lean Right.

A Sept. 2022 Small Group Editorial Review, conducted by a multipartisan panel of AllSides reviewers, rated the Washington Times Lean Right. While reviewers on the left, right, and center noted balanced coverage on several stories, they also noted several articles that favored GOP politicians and that the self-description of the outlet conveyed conservative values.

A reviewer on the right observed that the Washington Times reported on some issues that the right doesn’t often cover, such as Indigenous rights. The reviewer on the right also saw multiple articles that were critical of the Democrats, indicating bias by story choice. Other reviewers noted a focus on stories relevant to the right such as border security, student loan debt forgiveness, and a potential presidential run by Gov. DeSantis. All reviewers noticed some center stories.

Reviewers on the left and right found that the about page of the Washington Times website portrayed an intention to provide right-leaning news coverage. The Washington Times identified its goal as being "a trusted counterweight to the media often identified as ‘mainstream’" and "to inform and to celebrate the American values of freedom, faith and family."

Democrats rated the Washington Times as Lean Right, on average, while Independents and Republicans rated it as Center.

A total of 853 people from across the political spectrum rated the bias of the Washington Times. The weighted average was 1.03, which is on the border of Lean Right and Center. The middle 50% of responses lied between -1.75 (Lean Left) and 3.09 (Right) – an interquartile range of 4.84. 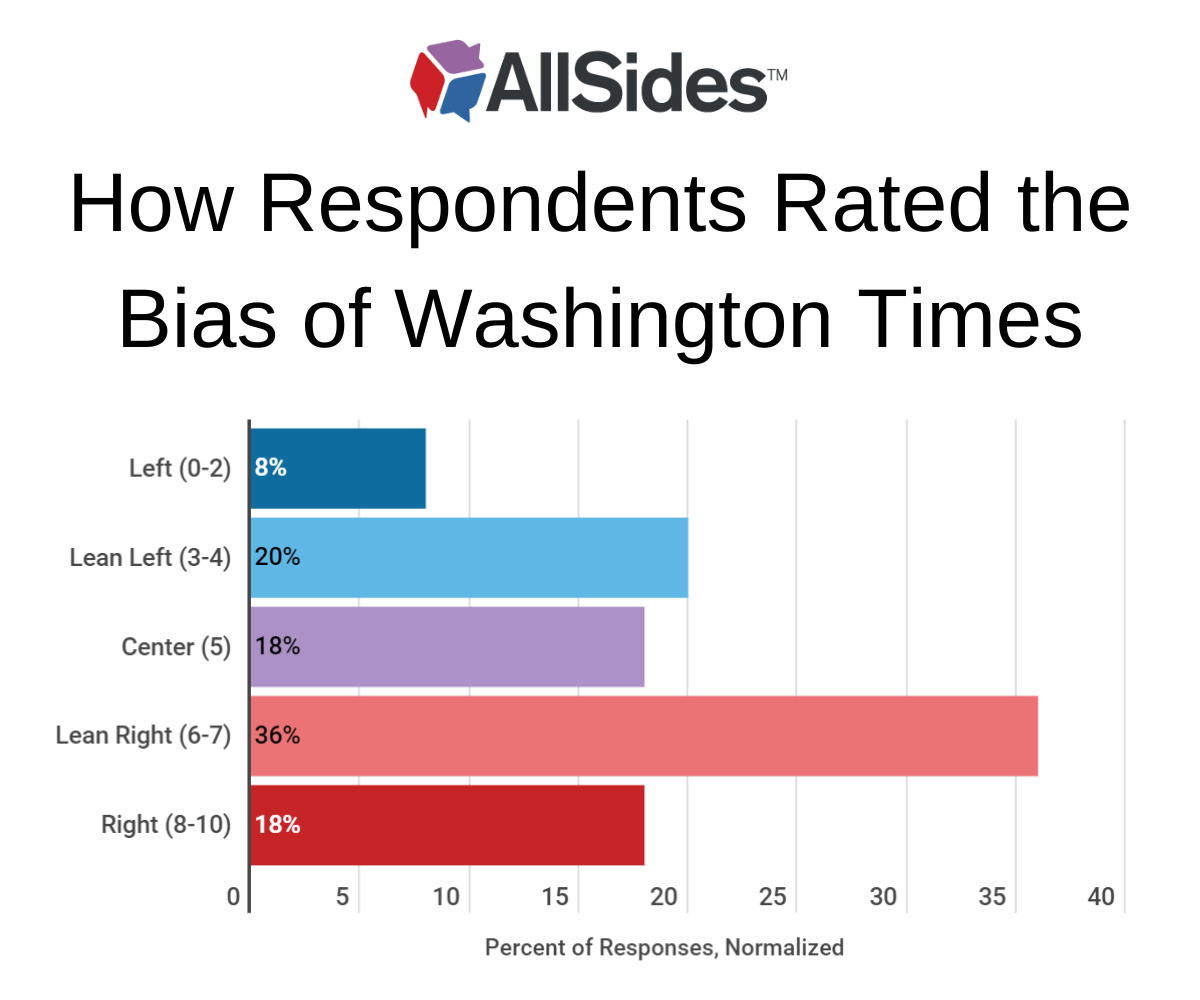 As of December 2022, people have voted on the AllSides Media Bias Rating for Washington Times. On average, those who disagree with our rating think this source has a Lean Right bias.

As of December 2022, AllSides has medium confidence in our Lean Right rating for Washington Times. Two bias reviews have affirmed this rating or multiple reviews have returned differing results. If we perform more bias reviews and gather consistent data, this confidence level will increase.

Since 1982, The Washington Times has furthered its founder's vision to provide a trusted counterweight to the media often identified as "mainstream." While presidents, prime ministers and other power brokers worldwide rely on our coverage, The Times primary audience consists of readers outside the halls of power. The Times delivers that audience facts and commentary to inform and to celebrate the American values of freedom, faith and family.

The Washington Times was founded by Sun Myung Moon in 1982. The Times notes that Moon "will forever be tied to the fight to defeat communism, a cause to which he devoted much of his life’s work." Speaking of the fall of the Soviet empire, he said, "I do not have the slightest doubt that God used The Washington Times to help bring an end to the most pernicious worldwide dictatorship in history and gave freedom to tens of millions of people."

The Times continued, "
As president, Ronald Reagan often praised Rev. Moon’s work and that of The Times, which, especially in the 1980s, focused extensively on communism and its attempted expansion around the globe."

Who Owns and Funds The Washington Times

Financing and ownership information last updated April 17, 2022. If you think this information is out of date or needs to be updated, please contact us.

This content was curated by AllSides. See our Balanced Newsfeed.
NewsDecember 5th, 2022
Supreme Court to decide how much authority state legislatures have over elections
Washington Times