Learn more about Center ratings
Go to BBC News
No Paywall
Our records indicate that content from this source is free to access. If this is incorrect, please email us to let us know.
Contents

BBC News is a news media source with an AllSides Media Bias Rating™ of Center.

After BBC was rated Lean Left in the Aug/Sept. 2022 Blind Bias Survey, AllSides conducted an Editorial Review. The panel determined that the bias of BBC's online news remains Center, with some slight Lean Left bias indicators. The AllSides panel, which contains people from the left, center, and right, found that BBC's reporting was generally Center; there was no spin or slant detected. BBC's online news did not include much subjective analysis in its writing, and story choices were balanced, with topics of interest to both the left and right. Many articles equally quoted both sides.

Some stories on Roe v. Wade did not show bias or highlighted perpectives on both sides. One piece, Anti-abortion Gen Z-ers see cause as social justice, highlighted young activists in the anti-abortion movement, which was seen as a Lean Right or Center choice; a piece about women divided on abortion was seen as Center; a piece titled "Elation and despair outside US Supreme Court" highlighted perspectives on both sides. The piece Patagonia: Billionaire boss gives fashion firm away to fight climate change was seen as Center; a panelist in the Center noted that Lean Left outlets may "offer context that frames climate change as especially dire and action to combat it as urgently needed," but BBC did not. A piece on UK Covid rates was seen as balanced and informational. Initial coverage of the FBI's raid on Trump's Mar-A-Lago home was informational and idd not show bias.

Some members of the panel noted that BBC's Equality Matters section, with stories about gender fluidity and "heightism," was lean left in focus and story choice.

Some word choices were seen as Lean Left, such as a piece that referred to Trump's "false claims" about the 2020 election (conservatives would disagree that the election was fair or that his claims are totally false). A story on Florida sending migrants to wealthy Martha's Vineyard was seen as slightly Lean Left, as it focused more on criticism of the move and highlighted quotes eliciting sympathy for the migrants. A piece on The Little Mermaid was also seen as Lean Left for highlighting praise of racial casting in a traditionally white role, and not including criticism of the choice, which was significant at the time.

BBC was rated Lean Left in the Aug. 2022 AllSides Blind Bias Survey. This differed from AllSides' rating of Center and triggered an Editorial Review, in which AllSides opted to keep BBC's rating as Center.

On average, Lean Left respondents perceived BBC News as Center. Respondents in all other bias categories – Left, Center, Lean Right, and Right – all perceived the bias of BBC News and Lean Left.

Democrats rated the bias of BBC News as Center, and close to Lean Left. Independents and Republicans rated BBC News as Lean Left. 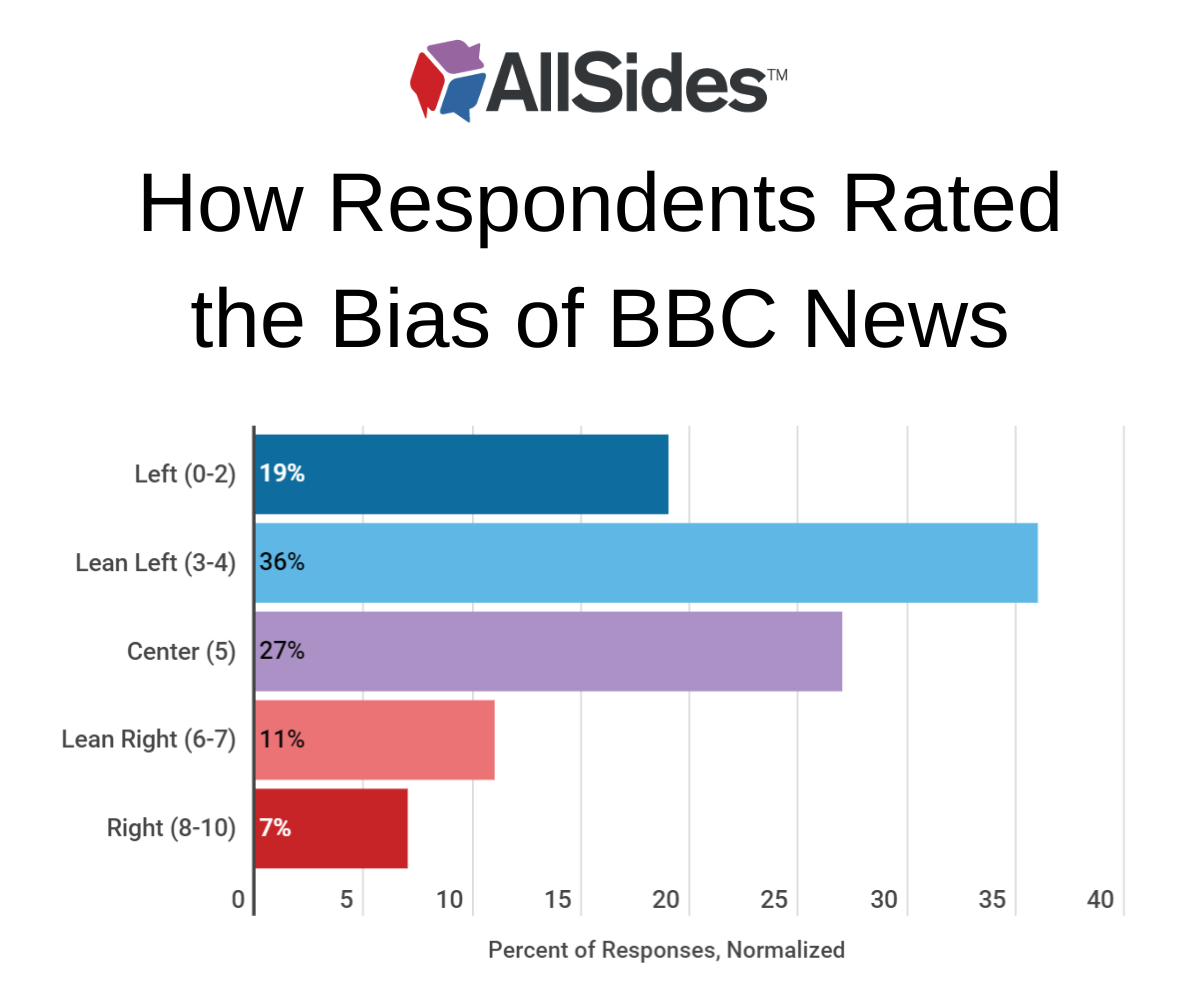 The BBC fact check section, called Reality Check, has a Center bias rating, according to a July 2021 Small Group Editorial Review by AllSides editors on the left, center, and right.

In 2020, AllSides received significant community feedback from those who said they believe BBC’s media bias is Lean Left. AllSides conducted a Blind Bias Survey of readers across the political spectrum in August 2020 and then conducted an Editorial Review of BBC on August 20, 2020. AllSides concluded BBC’s Media Bias Rating remains Center — but the team unanimously agreed that BBC has some Lean Left bias, mostly shown via story choice. Read more about the Editorial Review here.

The results of our August 2020 Blind Bias Survey indicated people from across the political spectrum on average view BBC’s content as on the borderline of a Lean Left and Center bias. 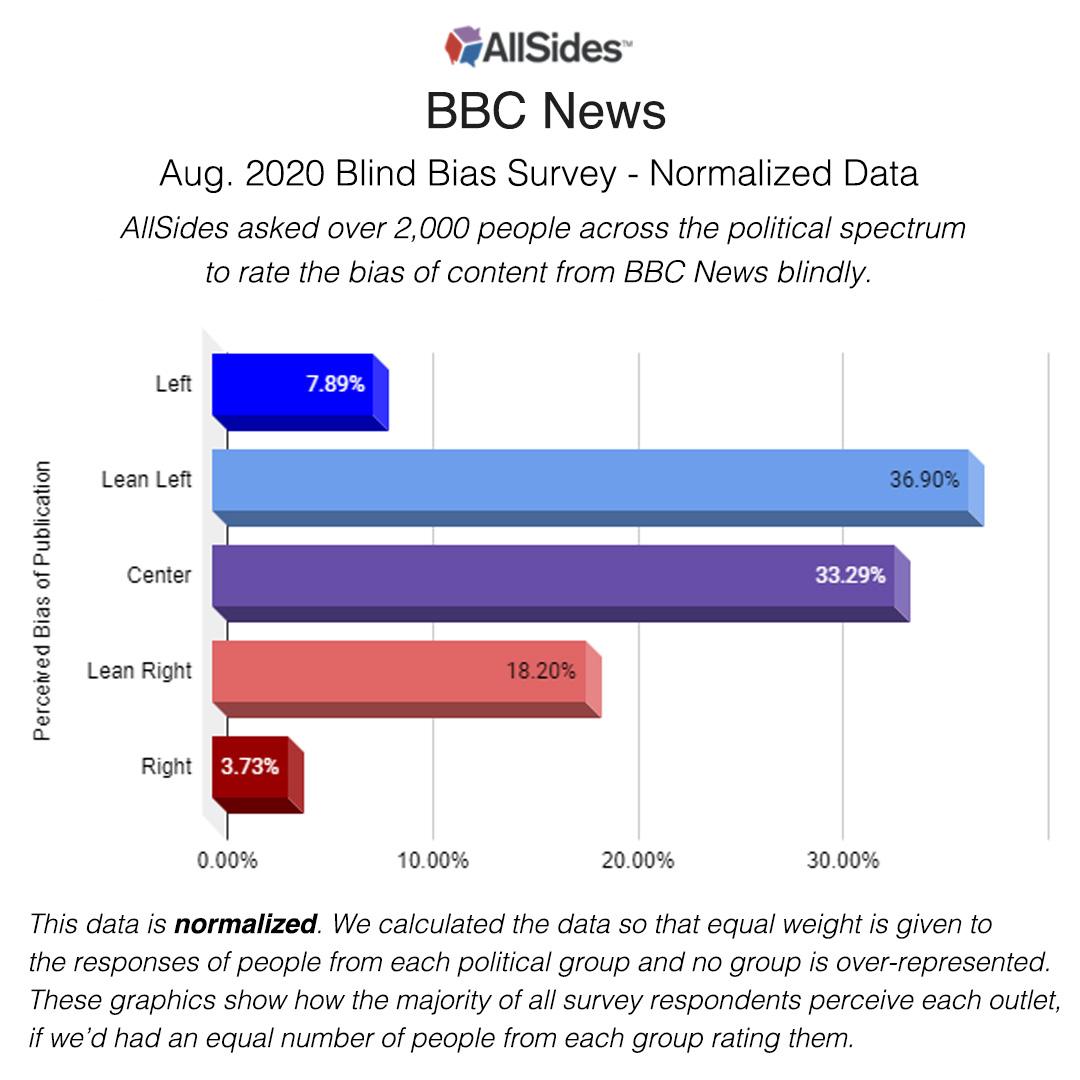 Bias is in the eye of the beholder: Pluralities across 3 groups of respondents — people who identified themselves as Lean Left, Lean Right, or Right — thought BBC was Lean Left. However, the average bias rating of all political groups for BBC was right on the border of Center and Lean Left.

In sum: BBC’s bias is still largely Center, though close to Lean Left.

During our August 2020 Editorial Review of BBC, all but one AllSides panelist found BBC’s online content to be Center. There was agreement on the team that BBC displays some Lean Left bias, mostly via story choice. The person in disagreement with what overall rating BBC deserves is a conservative who said BBC is Lean Left, which tracks with our Blind Bias Survey data that found the majority of conservatives see BBC as Lean Left.

All team members noted that BBC doesn’t typically display common types of media bias such as spin, slant, sensationalism, or opinion statements presented as fact. It does, however, display some bias by omission and bias by placement, omitting some stories that conservatives may deem important and more prominently placing stories generally considered to be important to liberals on its homepage. The team noted BBC does a good job separating news and analysis/opinion content.

All reviewers noted that BBC is diligent in generously using quotes, not partial quotes nor quotes taken out of context. The team found balanced articles that displayed a range of opinions from everyday people about their beliefs on U.S. presidential candidates.

One panelist with a Lean Left bias said they sometimes noted sensationalism in BBC’s writing, but “it is not used in a highly partisan context — for example, ‘Obama and Trump rip into each other’s record.’

The panelist with a Lean Right bias who said BBC is Lean Left said BBC’s story choice around summer 2020 protests and riots in major U.S. cities largely highlighted attacks on reporters, but did not highlight widespread arson, looting, violence, or destruction of buildings and property.

They also noted an anti-Trump bias in the publication, pointing to an example where BBC ran the headline: “QAnon: Trump lauds bizarre conspiracy theory.” They noted: “‘Laud’ means “to celebrate,” yet in the very first sentence of the piece, BBC contradicts this claim, stating, “The president said he did not know much about the bizarre conspiracy theory, except that its adherents like him.”

About a Center Bias Rating

A Center media bias rating from AllSides does not necessarily mean a source is totally unbiased, neutral, perfectly reasonable, or credible. It simply means the source or writer rated does not predictably publish perspectives favoring either end of the political spectrum — conservative or liberal.

A Center outlet may not show much predictable bias, or its bias may lean to the left and right equally at different times. A media outlet with a Center rating may omit important perspectives, or run individual articles that display bias, while not displaying a lot of predictable bias in its content overall. Center doesn't mean better! AllSides encourages people to read outlets across the political spectrum.

AllSides found BBC displayed a left media bias in its reporting of summer 2020 protests in London, which BBC described as "largely peaceful." AllSides uncovered evidence that there was a significant amount of violence at the event.

A July 2020 independent review by an AllSides staffer found BBC does not display many of the common types of media bias, though it sometimes presents subjective statements as fact and employs slant, which is when reporters only tell part of a story and omit other perspectives.

In May 2020, BBC announced it had hired a bias-checker for its social media accounts to ensure the taxpayer-funded outlet remained neutral, following a controversy that reportedly led to tens of thousands of complaints, according to The Guardian.

In the incident, BBC Newsnight‘s Emily Maitlis reportedly declared as fact that the prime minister’s senior aid Dominic Cummings “broke the rules” and Boris Johnson’s “blind loyalty” to Cummings allegedly led to “fury, contempt and anguish” from the public. BBC reportedly deleted the viral clip of the comments from Twitter, and issued a statement that it “did not meet our standards of due impartiality" and stated “staff have been reminded of the guidelines" of impartiality. BBC also set up a dedicated page for complaints.

On Dec 27, 2013, the AllSides Bias Rating™ for BBC wasCenter. This rating represented the bias for the news pages published online, but did not reflect opinion or editorial content. As of July 2016, a small majority of nearly 800 AllSides users who voted on The BBC's bias rating disagreed with our rating of Center, but those who disagreed are split on whether it is left or right, so the BBC bias rating remained Center.

Who Owns and Funds BBC

The British Broadcasting Corporation is a publicly financed broadcasting system in Great Britain. BBC is an autonomous corporation under Royal Charter and operates under its agreement with Great Britain's Secretary of State for Digital, Culture, Media and Sport. BBC’s Executive committee is headed by Director-General Tim Davie.

As of December 2022, people have voted on the AllSides Media Bias Rating for BBC News. On average, those who disagree with our rating think this source has a Lean Left bias.

As of December 2022, AllSides has medium confidence in our Center rating for BBC News. Two bias reviews have affirmed this rating or multiple reviews have returned differing results. If we perform more bias reviews and gather consistent data, this confidence level will increase.

Viktor Bout: Who is the Merchant of Death?
BBC News

Putin: Nuclear risk is rising, but we are not mad
BBC News