AllSides Media Bias Rating™: Left
You agree.
Thank you! Community votes alone don't determine our ratings, but are valuable feedback and can prompt us to do more research.
59407/50946

What a Left Bias Rating Means

The source displays media bias in ways that strongly align with liberal, progressive, or left-wing thought and/or policy agendas. A Left rating is our most liberal rating on the political spectrum.

Learn more about Left ratings
Go to CNN (Online News)
No Paywall
Our records indicate that content from this source is free to access. If this is incorrect, please email us to let us know.
Contents

CNN (Online News) is a news media source with an AllSides Media Bias Rating™ of Left.

From 2017 to 2021, the bias of CNN's web news shifted significantly, from Center, to Lean Left, to Left. CNN, its employees, and its content are commonly associated with liberal media bias by voices across the political spectrum in the public discourse.

We split our bias ratings for CNN Web News and CNN Opinion/Editorial on December 21st, 2017, because they were significantly different; read our explanation here. In January 2021, we determined the bias of CNN's news content and editorial content matched, and were both rated Left.

What a "Left" Rating Means

Sources with an AllSides Media Bias Rating of Left display media bias in ways that strongly align with liberal, progressive, or left-wing thought and/or policy agendas. This is our most liberal rating on the political spectrum.

CNN’s fact check section has a Left bias, according to a July 2021 Small Group Editorial Review by AllSides editors on the left, center, and right.

After analyzing the results of our November 2020 Blind Bias Survey, in which 2,285 people across the political spectrum blindly rated CNN's content, AllSides moved CNN's Media Bias Rating™ from Lean Left to Left. We officially shifted CNN's bias rated to left on Jan. 15, 2021.

On average, people who self-reported that they are on the left rated CNN as being between Lean Left and Left; people in the center and on the right found CNN on average to be Left. The average rating from people across the political spectrum was Left. 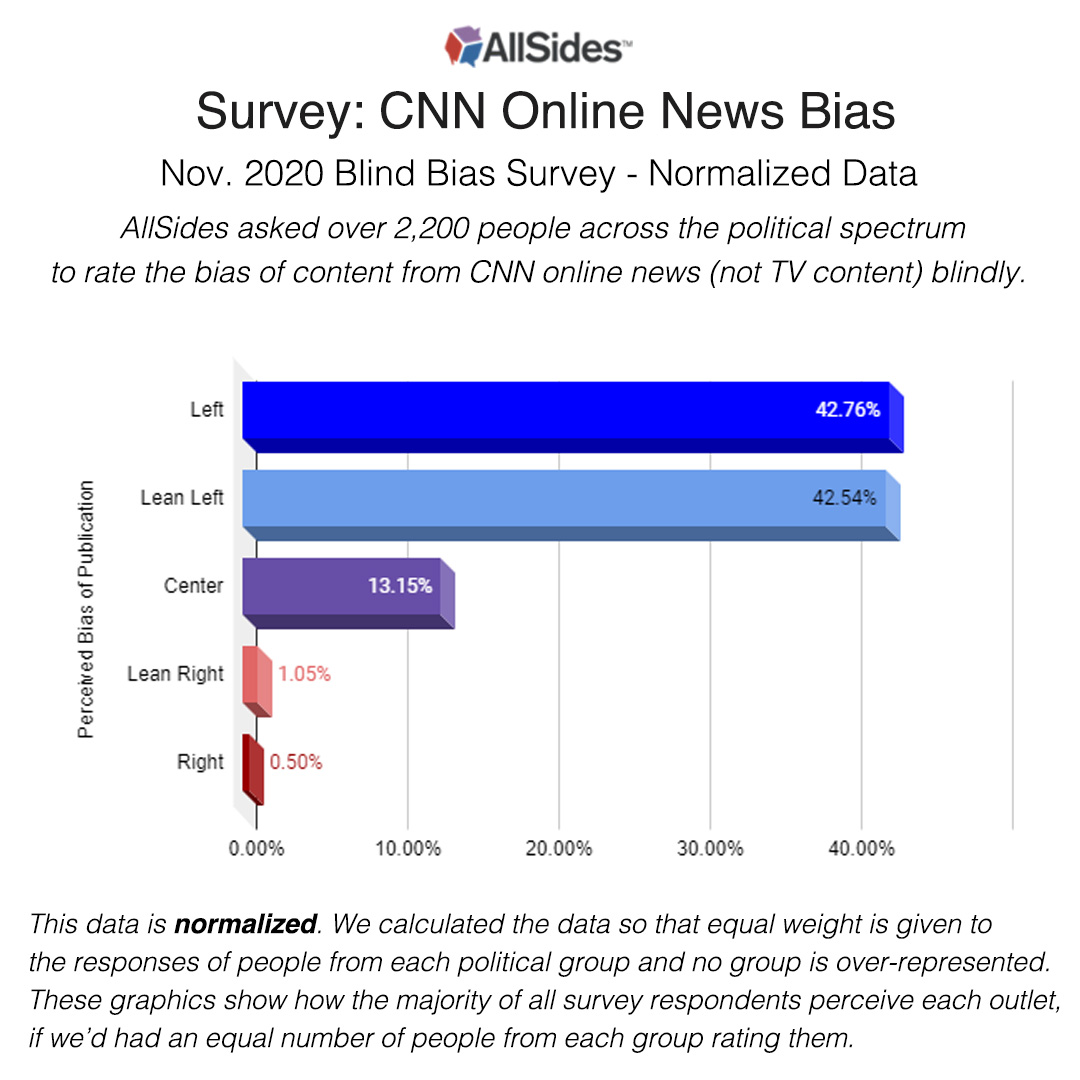 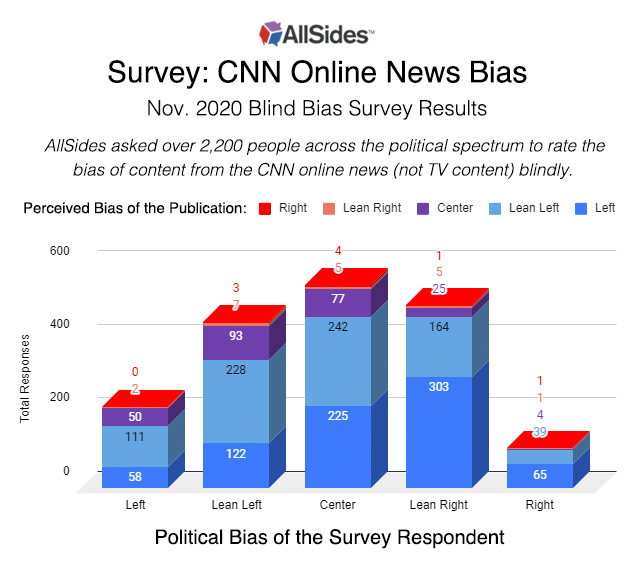 For this survey, AllSides collected two types of content from CNN's website: top headlines from two different days at the same time of day, and top stories CNN ran around two major national news stories. Stories and headlines were stripped of branding and any information that would allow participants to identify the outlet. Participants were asked to rate the bias of CNN on a scale of Left, Lean Left, Center, Lean Right, and Right.

After analyzing the results of this survey, members of the AllSides team conducted some independent reviews of CNN's content, and decided to move the outlet's rating to Left.

During our independent reviews, team members on the left, center and right noted a lot of sensationalism in CNN's news reporting. One team member with a Center bias said, "CNN uses proper source attribution and good hyperlinks, and often has clear, accurate labels for content. However, its homepage is dominated by anti-Trump/anti-GOP narratives and features few to zero anti-left/anti-Democrat narratives. The reports themselves are often skewed by a lack of right-leaning sources, biased/subjective language, or omission of facts that may, if included, counter a left-leaning point of view."

We found CNN's fact-checking section was very skewed toward an anti-Donald Trump/anti-GOP focus, and that the outlet didn't focus nearly as much on fact checking Democrats or Joe Biden — or really anything except President Donald Trump.

After conducting deep editorial analysis and analyzing user feedback, on March 27th, 2018, AllSides moved the Media Bias Rating™ for CNN Web News from Center to Lean Left. More details as to why we made the change can be found in our March 2018 blog post on the matter, as well as below.

After years of receiving feedback from AllSides users that our media bias rating of CNN Web News as Center was incorrect, we conducted an extensive editorial review in March 2018, after which we decided to move CNN Web News to a Lean Left rating.

For our review of CNN Web News, the entire AllSides team read CNN’s homepage and politics page every day for a week and compared it to other Center and Lean Left sources. We looked at the stories CNN chose to cover as well as the prominence certain stories held over others.

We found CNN Web News has a tendency to include a lot of Opinion and Analysis without labeling it clearly as such until afterreaders clicked through to the full article. This means CNN displayed Opinion-level content alongside hard news on the homepage, making it look like the Opinion pieces are objective, fact-based news.

We also found that there were Left-leaning and Center articles featured on CNN, but the outlet never published a Right-leaning article. (Note that a Center rating is assigned if we see a balance of biases being represented, which is not the case with CNN.)

The results from AllSides' January 2013 and October 2013 blind surveys, as well as data from a 2005 UCLA study of media bias all rated CNN as Center. However, the scores in both of the blind surveys were on the border of Center, leaning towards Left.

As of December 2022, people have voted on the AllSides Media Bias Rating for CNN (Online News). On average, those who disagree with our rating think this source has a Lean Left bias.

There has been ongoing disagreement among the AllSides community over CNN Web News' rating. In 2018, we broke down the numbers around CNN Web News' media bias and leftward shift here.

As of December 2022, AllSides has high confidence in our Left rating for CNN (Online News). Three or more bias reviews have affirmed this rating or the source is transparent about bias.

In January 2020, CNN faced accusations of bias over its moderation of a 2020 presidential debate between Democratic candidates.

In 2021, as former New York Gov. Andrew Cuomo faced widespread criticism over sexual harassment allegations and a cover-up of COVID-19 deaths in nursing homes, CNN took criticism. Chris Cuomo, a prime-time CNN television host and brother of Andrew, was accused of avoiding coverage of his brother's scandals after hosting him on his show for playful TV segments throughout the COVID-19 pandemic. The network faced similar allegations of avoiding negative coverage of Andrew.

Political Leanings of CNN's Audience as of 2014

President Donald Trump and others have accused CNN of being fake news. Fake news can be defined in many ways, and can refer to either overtly false information, or information that is biased or manipulative in some way. AllSides explored whether CNN is fake news on the blog in May 2019.

CNN was founded in 1980 by Ted Turner as a 24-hour cable news channel, the first 24-hour news channel at the tine. In April 2016, an executive of CNN said that the channel “is no longer a TV news network,” but “a 24-hour global multiplatform network.” CNN is among the world's leaders in online news and information delivery. Staffed 24 hours, seven days a week by a dedicated staff in CNN's world headquarters in Atlanta, Georgia, and in bureaus worldwide, CNN relies heavily on its global team of almost 4,000 news professionals. The CNN website features the latest multimedia technologies, from live video streaming to audio packages to searchable archives of news features and background information. The site is updated continuously throughout the day. CNN is available in over 100 million American households. In 1998, the Four Freedom Award for the Freedom of Speech was awarded to CNN.

This content was curated by AllSides. See our Balanced Newsfeed.
NewsDecember 2nd, 2022