Roe v. Wade Is Now in the Hands of the Three Trump Justices

Abortion, Supreme Court, Roe v. Wade
Save for Later
From The Left 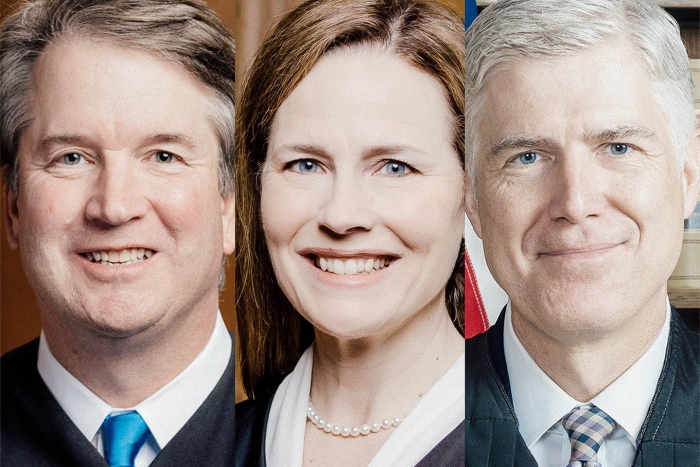 One of the most interesting fissures that has opened up within the conservative legal movement in recent years has been between mainstream conservative lawyers and the growing performance artist faction of the lawyers for the Trump base. Soon, the conservative justices themselves will have to pick which side of the battle they are on: With the filing last week of a brief that explicitly asks the Supreme Court to overturn Roe v. Wade, the state of Mississippi is forcing the court’s three newest Trump-appointed justices to choose between institutional stability and law that channels right-wing internet memes.

Examples of the latter abound in the past year. Rudy Giuliani has seen his license to practice law temporarily suspended—twice!—as a result of his star turns as all-purpose lawyer for crazy stuff. Last December, 17 Republican attorneys general signed a brief supporting a suit filed by Texas Attorney General Ken Paxton seeking to set aside the 2020 election based on false claims of “unconstitutional irregularities.” The chief law enforcement officers of those 17 states actually asked the Supreme Court to throw out every vote in the four consequential states in which Joe Biden had prevailed—Georgia, Michigan, Pennsylvania, and Wisconsin—and then have each state’s legislature declare Donald Trump the winner. Another exhibit might be the various lawsuits filed by Trump’s “Kraken” lawyers Lin Wood and Sidney Powell, who currently face the prospect of legal sanctions for their work advancing his bogus claims of a stolen election.

These filings bear certain hallmarks of what can best be described as litigation as imagined by a.m. talk radio hosts: maximalist claims, shoddy command of legal doctrine, disregard for the role of precedent, reliance on internet claims as “facts,” and a heavy dose of “own the libs” trolling. Distressingly, more and more frequently, these filings also bear the signatures of state attorneys general using the courts to advance their own political careers, as opposed to a coherent theory of justice. As Mark Joseph Stern explained, in describing why a full one-third of the nation’s attorneys general opted to use the power of their offices to sign on to a meritless effort to thwart democracy last December, “these lawyers run large agencies that deal with complex legal disputes every day; the job requires a level of competency that could not be met by someone suffering a complete break with reality. We should assume that these attorneys general are rational actors, politicians looking out for their own best interest.” As a result, he concluded, we must understand their willingness to sign on to the brief as an act of performative fealty to the Trump voters in their states. That these AGs have independent legal obligations and ethical rules that bar them from knowingly signing on to frivolous pleadings matters less than advancing Trump’s and their own future electoral fortunes, in their overarching calculations.

Read full story
Some content from this outlet may be limited or behind a paywall.
Abortion, Supreme Court, Roe v. Wade