Learn more about Lean Right ratings
Go to New York Post (News)
No Paywall
Our records indicate that content from this source is free to access. If this is incorrect, please email us to let us know.
Contents

The New York Post was rated Lean Right by people across the political spectrum on average in the Oct. 2022 AllSides Blind Bias Survey.

A total of 706 people across the political spectrum took the survey. The normalized average for New York Post was 1.26 on a scale from -9 to +9, with 0 representing Center. That average is in the Lean Right category. 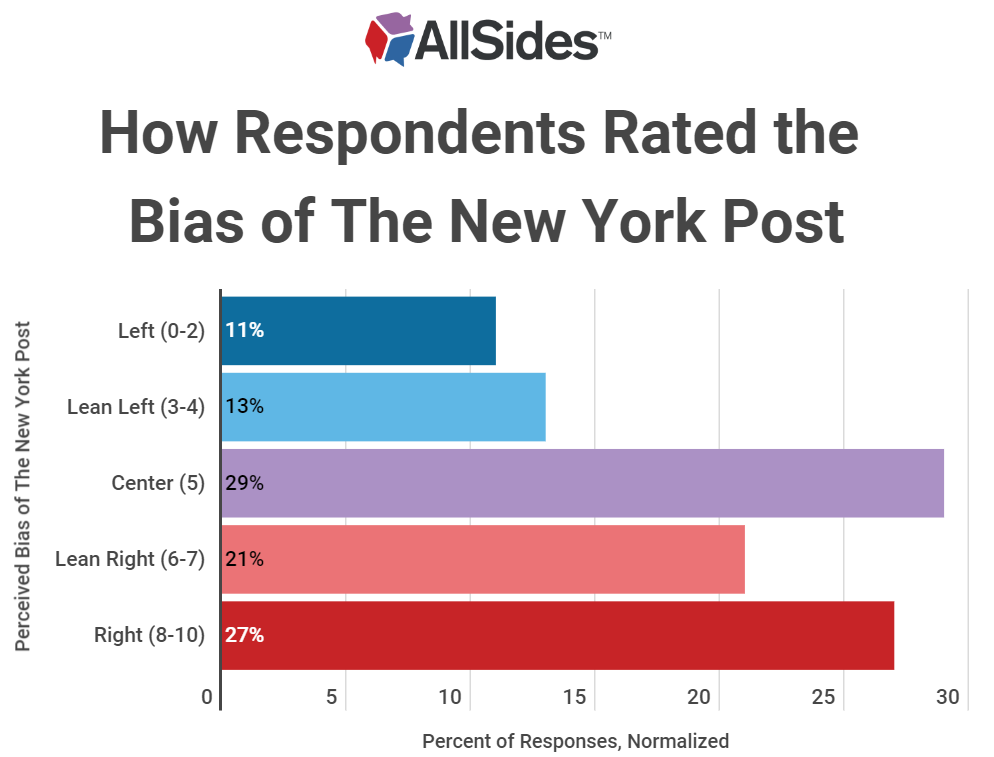 The AllSides team conducted an Editorial Review of the New York Post after our Nov. 2020 Blind Bias Survey showed that people across the political spectrum on average rated New York Post's political news content as Center. During the review, we opted to keep New York Post's bias rating as Lean Right.

Blind Bias Surveys are limited in that they only show respondents a small snapshot of an outlet's content, usually taken over a few days. Editorial Reviews allow us to look at content over a longer period of time, and to take into account elements that survey respondents don't see: headline placement, font size, photos and more.

During the Editorial Review, the team noted that the New York Post's political news section has a significant amount of nonbiased news reporting that doesn't include a lot of spin, slant, or other types of media bias; its writers typically use the word “said” instead of spin words such as "boasted," “bragged,” or “gloated,” “tirade," etc. Its story choice, however, was largely Lean Right, though not as predictable as other more overtly right-wing news outlets — there were multiple stories that would be more of interest to people on the left, such as a story about the target of police shooting, one about left-wing politicians' panic buttons being torn out before the Jan. 2020 Capitol protest/riot, and one about a Texas woman being "all smiles" after a court appearance related to her allegedly tearing down House Speaker Nancy Pelosi's door during the storming of the Capitol. Other stories were certainly more of interest to those on the right, such as a story about a GOP congressman's question "stumping" his colleagues in the House before the House voted to impeach President Trump for a second time, and a story about CNN's Jake Tapper being "blasted" for challenging a disabled veteran's patriotism, and another about Joe Biden's camp restoring a deleted donor list after conservative backlash. For that story, a left AllSides reviewer thought the story was spun because it included the subjective qualifer that the Biden campaign did this "quickly"; a right reviewer found the piece more balanced, saying it "largely just gave the facts."

The New York Post did display some sensationalist word choice, such as stories that used charged, vague or subjective language such as "slams" or subjectively characterized people as "furious." One team member on the left said a headline about a professor being fired seemed to be spun to insinuate it was because of his so-called "racist" tweets, but the story itself was more balanced and noted that this was not actually why he was being fired, pointing to some potentially disingenuous framing. The New York Post did have a significant amount of tabloid content.

The team agreed that the New York Post seemed moreso to be biased toward clicks, not necessarily always left or right. Overall, the team opted to keep the New York Post's bias rating as Lean Right.

People from across the political spectrum who participated in our Nov. 2020 Blind Bias Survey rated the New York Post as between Center and Lean Right on average. Following an Editorial Review, the AllSides team decided to keep New York Post’s Media Bias Rating™ as Lean Right.

Blind Bias Surveys only show participants a small snapshot of the outlets' content in time — it doesn't capture content over a long period of time, nor photos, font size, or other potential indicators of bias. The results triggered an Editorial Review by the AllSides team, in which we can look at content over a longer period of time and with more elements; after the Editorial Review, we opted to keep New York Post’s bias rating as Lean Right.

In July 2020, AllSides shifted New York Post's Media Bias Rating™ from Right to Lean Right, and created a separate media bias rating for New York Post Opinion. AllSides editors conducted independent reviews in which they found New York Post's news reporting was generally objective and factual, though often focused on issues of importance to conservatives. On its homepage, it blurred the line between news and opinion by not clearly marking opinion content as such.

As of December 2022, people have voted on the AllSides Media Bias Rating for New York Post (News). On average, those who disagree with our rating think this source has a Lean Right bias.

As of December 2022, AllSides has high confidence in our Lean Right rating for New York Post (News). Three or more bias reviews have affirmed this rating or the source is transparent about bias.

The New York Post is a daily newspaper in New York City, published in tabloid format. Its distribution ranked 4th in the US in 2018.

According to Wikipedia, the New York Post has been criticized for "sensationalism, blatant advocacy, and conservative bias." It continues:

Perhaps the most serious allegation against the Post is that it is willing to contort its news coverage to suit Murdoch's business needs, in particular that the paper has avoided reporting anything that is unflattering to the government of the People's Republic of China, where Murdoch has invested heavily in satellite television.[51] However, it has recently allowed criticism of the People's Republic of China and its handling of the Hong Kong protests.[52] ...

According to a survey conducted by Pace University n 2004, the Post was rated the least-credible major news outlet in New York. It was the only news outlet to receive more responses calling it "not credible" than credible (44% not credible to 39% credible).