Learn more about Lean Left ratings
Go to ABC News (Online)
No Paywall
Our records indicate that content from this source is free to access. If this is incorrect, please email us to let us know.
Contents

Note: AllSides rates online content on ABCnews.com only. AllSides does not rate the bias of radio or TV content.

A total of 1,147 people across the political spectrum rated ABC News Lean Left on average. 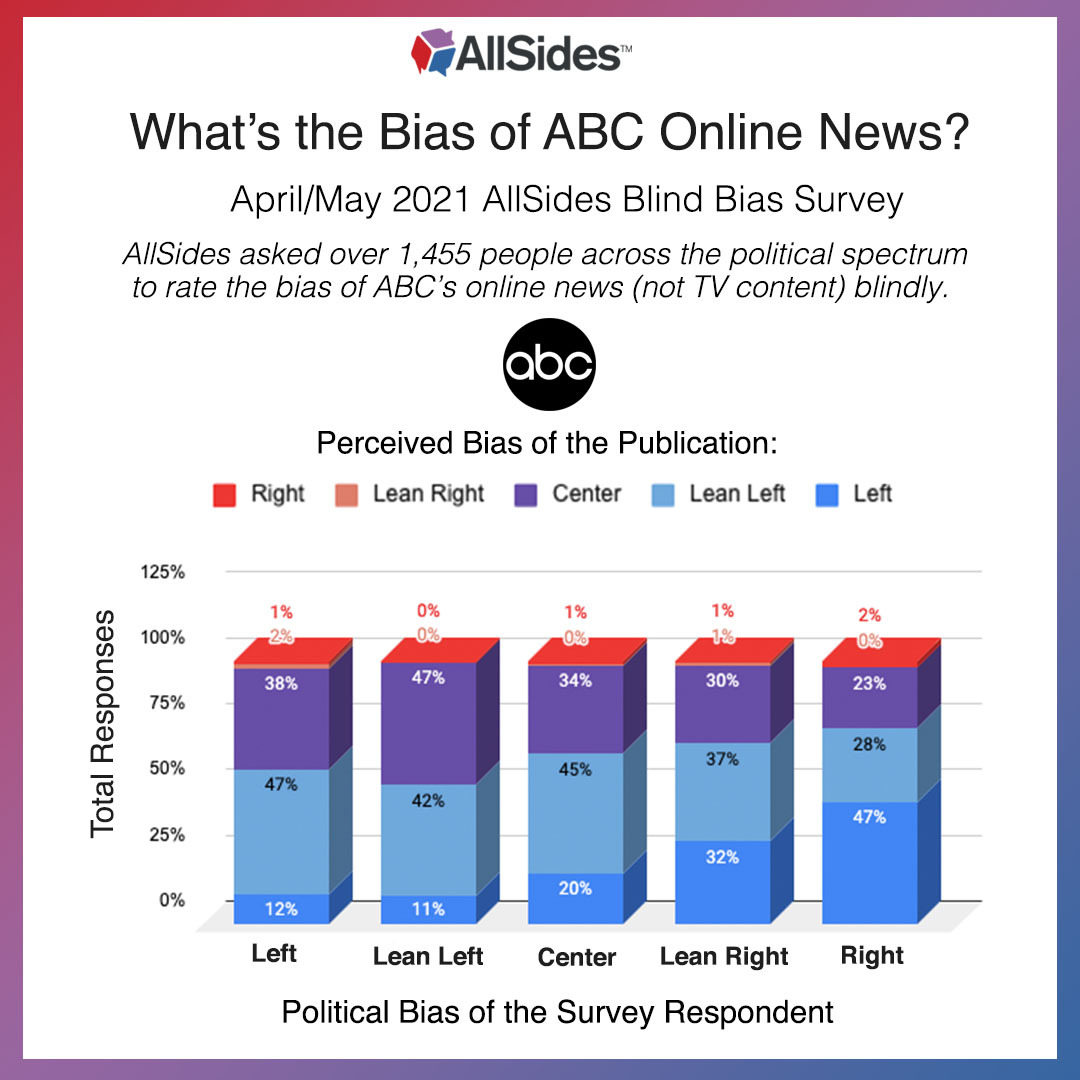 The results from an AllSides January 2013 Blind Bias Survey found ABC News bias (website content only) lies on the border line between Lean Left and Left, with a flat normalized score of 1.83 and a raw score of 1.79.

As of February 2023, people have voted on the AllSides Media Bias Rating for ABC News (Online). On average, those who disagree with our rating think this source has a Lean Left bias.

As of April 2017, a slight majority of over 5,000 users agreed with our Lean Left ABC News bias rating. The average rating for ABC by the people who disagreed was also Lean Left. This is consistent with past community feedback.

As of July 2016, the average of users’ individual bias ratings for ABC News was Lean Left. A small majority of nearly 1,200 AllSides users disagreed with the Lean Left rating, but those who disagreed were split on whether the rating should be Left or Center, producing an overall average of Lean Left.

As of Dec. 12, 2013, just over half of the AllSides Community agreed with the Lean Left rating, while the other half were split between rating it Left and Center.

As of February 2023, AllSides has high confidence in our Lean Left rating for ABC News (Online). Three or more bias reviews have affirmed this rating or the source is transparent about bias.

ABC News was founded in 1945 and is now owned by The Walt Disney Company. ABC began as a radio network in 1943. The news and information channel has many different broadcast programs, including ABC World News Tonight, Nightline, 20/20, Good Morning America, and more. According to AllSides analysis and multiple third-party sources, ABC News is more "blue" than it is "red."

A 2005 UCLA study, based on the television news program rather than the website, gave ABC News a Center rating though very close to Lean Left.

The financial contributions of media outlet employees to political campaigns don't impact our ratings — we rate content only — but we add this information in the interest of transparency. During the 2008 election, 1,160 employees from ABC News and two other major broadcast television networks donated a total of $1,020,816 to the Democratic Party. A total of 193 donations were made, totaling $142,863, to the Republican Party, according to an analysis by The Washington Examiner of data compiled by the Center for Responsive Politics.

This content was curated by AllSides. See our Balanced Newsfeed.
NewsFebruary 1st, 2023

Man who disarmed Monterey Park shooter speaks out: 'Something came over me'
ABC News (Online)