Privacy, NSA, Tucker Carlson, Media industry
Save for Later
From The Center 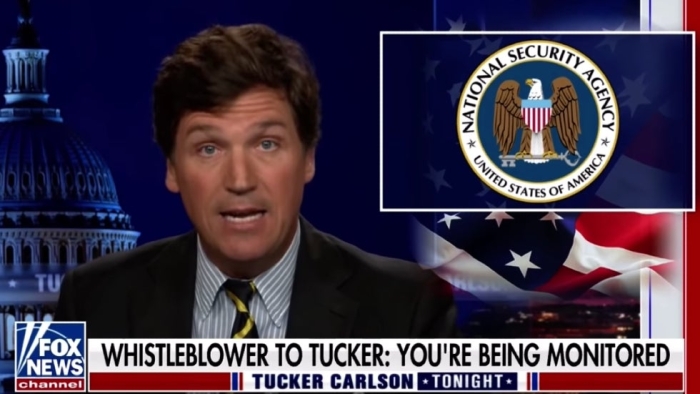 Fox News host Tucker Carlson on Tuesday again insisted that he is being spied on by the federal government despite the nation's leading intelligence agency refuting his claim earlier the same day.

"Did the Biden administration read my personal emails? That’s the question that we asked directly to NSA officials when we spoke to them about 20 minutes ago in a very heated conversation," Carlson said, referring to the National Security Agency. "Did you read my emails? And again, they refused to say ... 'We can’t tell you, and we won’t tell you why we can’t tell you.' My emails. And the message was clear: 'We can do whatever we want.' "

Carlson said that a statement released by the NSA on Tuesday evening "does not deny" the allegations he made Monday night claiming he was being surveilled by the intelligence agency.

“Tucker Carlson has never been an intelligence target of the Agency and the NSA has never had any plans to try to take his program off the air,” the NSA said in a statement. "NSA has a foreign intelligence mission. We target foreign powers to generate insights on foreign activities that could harm the United States. With limited exceptions (e.g. an emergency), NSA may not target a US citizen without a court order that explicitly authorizes the targeting."