Learn more about Lean Right ratings
Go to Reason
Possible Paywall
Some content from this source may be limited or behind a paywall.
Contents

Reason is featured on the AllSides Media Bias Chart™.

Reason is a news media source with an AllSides Media Bias Rating™ of Lean Right.

Reason was rated Lean Right by people across the political spectrum on average in our April/May 2021 Blind Bias Survey. 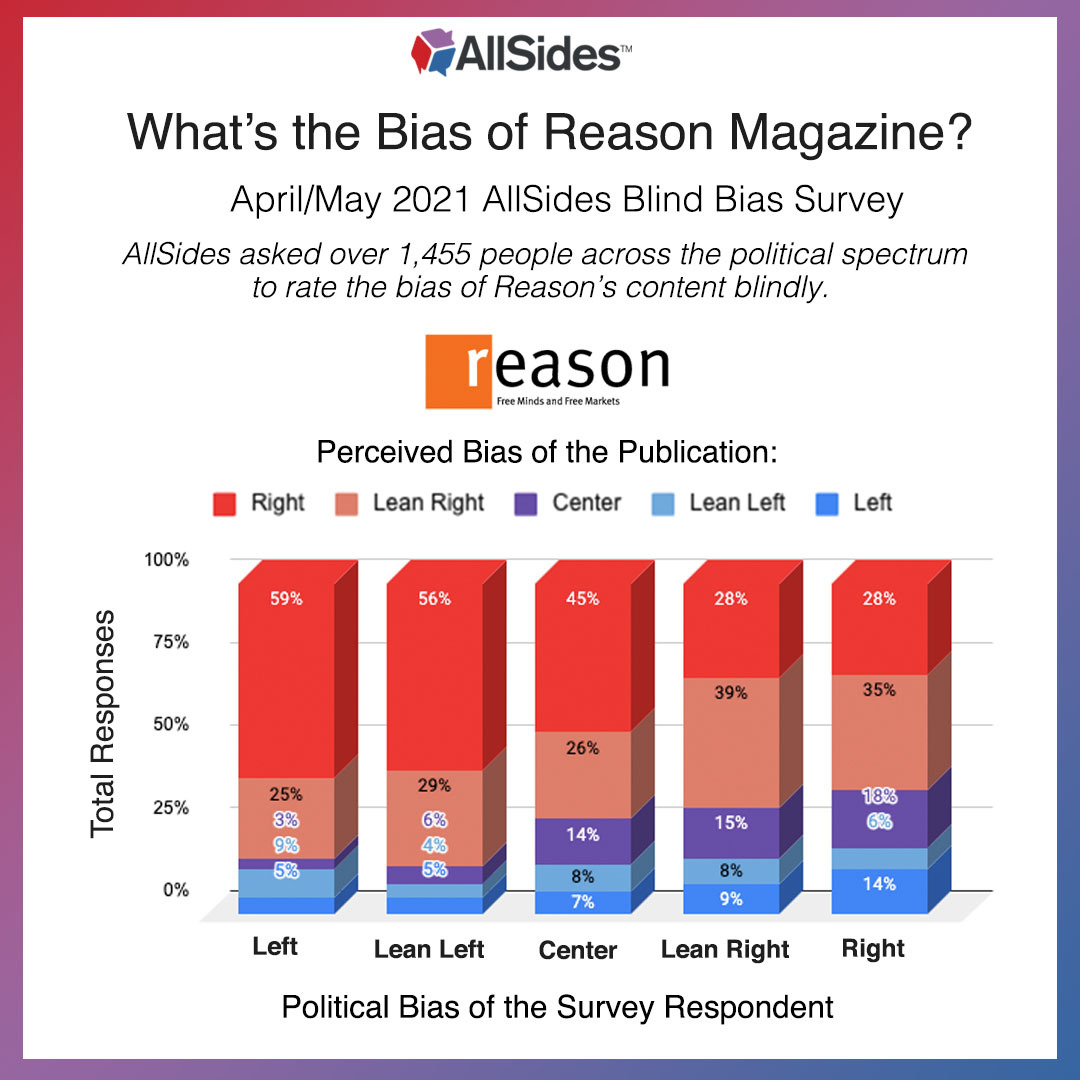 A total of 1,030 people rated the bias of content from Reason in this survey.

Taken together, the average rating across all groups was Lean Right.

An October 2019 AllSides Independent Review of Reason's online content (AllSides does not rate print content) by AllSides Staff returned a Lean Right rating. The reviewer found the publication promotes ideas such as deregulating markets and getting the state out of what libertarians consider to be private decisions, focusing on the downsides of criminalization of sex work, drugs, vaping, and other vices, with pieces such as "Overdose Deaths Are the Product of Drug Prohibition". Reason often points out government incompetence and publishes content such as "Legalize Sex Work" and "Legitimizing Sex Work." It writes favorably about school choice, criticizes minimum wage policy, and promotes free speech.

AllSides sometimes receives feedback from community members who dispute Reason's bias rating; some say Reason deserves a Center or Lean Left rating, or that its biases are not accurately captured by our 5-point bias rating scale. But because Reason's coverage generally reflects perspectives favoring small government, deregulation of private business, and individual liberty, principles typically associated with the right, we give Reason a Lean Right rating. You can vote on this rating at the top of the page and let us know what you think Reason's bias should be rated.

As of January 2023, people have voted on the AllSides Media Bias Rating for Reason. On average, those who disagree with our rating think this source has a Center bias.

As of January 2023, AllSides has medium confidence in our Lean Right rating for Reason. Two bias reviews have affirmed this rating or multiple reviews have returned differing results. If we perform more bias reviews and gather consistent data, this confidence level will increase.

Reason covers the news from a libertarian perspective. Although there is much variation among libertarian beliefs, libertarians are commonly described as socially liberal and fiscally conservative. Libertarians uphold freedom as their highest principle and moral value. They seek to maximize individual choice and voluntary association in society and in policymaking, advocating minimal state intervention in private decision making. As such, libertarians emphasize the importance of free markets. Reason's tagline is "Free Minds and Free Markets."

Reason is the monthly print magazine of "free minds and free markets." It covers politics, culture, and ideas through a provocative mix of news, analysis, commentary, and reviews. Reason provides a refreshing alternative to right-wing and left-wing opinion magazines by making a principled case for liberty and individual choice in all areas of human activity. Reason Online is updated daily with articles and columns on current developments in politics and culture. It also contains the full text of past issues of the print edition of Reason. Reason Online is entirely free. Reason and Reason Online are editorially independent publications of the Reason Foundation, a national, non-profit research and educational organization.

This content was curated by AllSides. See our Balanced Newsfeed.
OpinionJanuary 27th, 2023