141 of the 193 members of the U.N. General Assembly voted Wednesday in favor of a non-binding resolution “deploring” Russia’s invasion of Ukraine.

The resolution also demanded that Russia “immediately, completely and unconditionally withdraw all of its military forces from the territory of Ukraine within its internationally recognized borders.” The measure came to a vote in the General Assembly after Russia vetoed a similar resolution in the U.N. Security Council on Feb. 25. Among the resolution’s supporters were the U.S., Mexico, Nigeria, and Brazil, as well as every member of the E.U. Thirty-five countries abstained, including China, India, Iran, and South Africa. Five countries voted against the resolution: Russia, Belarus, Syria, North Korea, and Eritrea.

Some coverage across the spectrum called the resolution “historic.” Some outlets like Fox News (Right), Reuters (Center) and the Washington Post (Lean Left) featured the story more prominently on homepages. Some of Fox News’ coverage focused specifically on China’s abstain vote. Axios (Center) stood out by providing an interactive map showing how countries voted. Update 3/2/22 5:20 PM ET: The New York Times (Lean Left), The Week (Lean Left) and Newsweek (Center) reported 34 countries abstained, not 35, possibly because of an image tweeted by Ukrainian President Zelenskyy from before Equitorial Guinea's abstention was recorded. As of Wednesday afternoon, none of these outlets had changed their reporting to match the official tally. 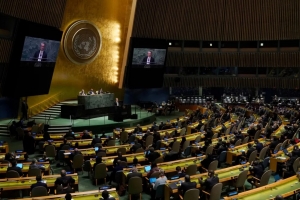 The United Nations General Assembly on Wednesday approved a non-binding resolution condemning Russia for invading Ukraine and demanding that it withdraw its military forces.

The vote came after a series of speeches during which the majority of countries called on Russia to end the violence in Ukraine, which has continued for nearly one week.

Sergiy Kyslytsya, the Ukrainian ambassador to the U.N., urged countries to vote in favor of the resolution in an emotional address that ended with applause from the chamber. 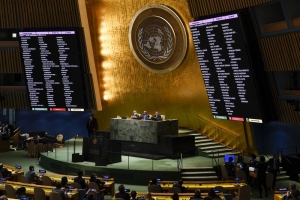 The U.N. General Assembly voted at an emergency special session Wednesday to demand an immediate halt to Moscow’s offensive against Ukraine and withdrawal of all Russian troops, with very strong support from the world organization’s 193 member nations that sparked sustained applause.

The vote on the resolution, entitled “Aggression against Ukraine,” was 141-5 with 35 abstentions.

Russia got support for its appeal to vote against the resolution only from Belarus, Syria, North Korea and Eritrea, a powerful indication of the international isolation that Russian President Vladimir Putin faces for invading... 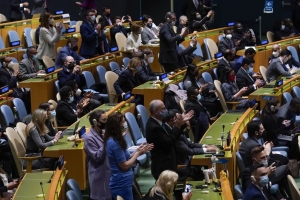 The resolution holds no legal authority but serves as a symbol of global unity against Russian President Vladimir Putin as only five of the 181 nations present for the vote opposed the measure.