On the sixth day of the Russia-Ukraine conflict, the biggest ground war in Europe since World War II, Russian troops attacked civilian areas in Kharkiv, the second-largest city in the country.

At the same time, a 40-mile-long convoy of Russian tanks and other vehicles advanced on the capital city of Kyiv. Ukrainian President Volodymyr Zelensky, in a video message posted on social media, accused Russia of war crimes after its assault on Kharkiv.  He also gave an emotional appeal to the European Parliament, saying Ukraine was "fighting also to be equal members of Europe." He received a standing ovation after his remarks on the video call. Many Ukrainian citizens spent another night in basements and shelters, and more than 500,000 citizens have fled the country. 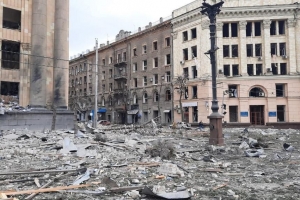 A miles-long armored Russian military convoy nearing Kyiv and the targeting of civilian areas in Ukraine's second city, Kharkiv, may herald a new phase of fighting after six days of stiff Ukrainian resistance.

The latest: Russia's Ministry of Defense said Tuesday it will strike facilities in Kyiv belonging to Ukraine's security services and a special operations unit, which Moscow has accused of carrying out cyberattacks. Russia urged Ukrainian citizens living nearby to leave their homes.

Ukrainian President Volodymyr Zelensky released a new video accusing Russia of war crimes for its siege of Kharkiv, a mostly Russian-speaking city near... 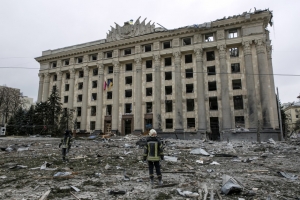 Ukraine's embattled leader accused Russia of war crimes and "state terrorism" Tuesday after a fresh blast struck the heart of the country's second-largest city, fueling fears civilians would face the brunt of an intensifying assault.

As the conflict escalated on its sixth day, Russia hit major cities across Ukraine with increasingly heavy shelling while a vast convoy of its forces threatened the capital.

Ukrainian President Volodymyr Zelenskyy vowed to defend Kyiv and sought to rally both his country and the international community against what he called "outright, undisguised terror" from Moscow, in a video message... 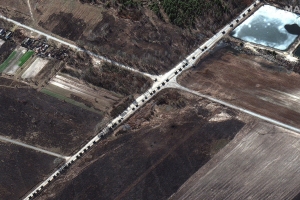 A destroyed armored vehicle is seen in front of...