Diplomats from Russia, the U.S. and Ukraine had harsh words for each other at a Monday meeting of the United Nations Security Council.

Russia maintained its military buildup around Ukraine on Monday, as Ukrainians prepared for war with weapons sent by the U.S. and other Western countries. U.S. Ambassador Linda Thomas-Greenfield said Russia’s actions struck “at the very heart of the U.N. charter,” adding, “And they are attempting, without any factual basis, to paint Ukraine and Western countries as the aggressors to fabricate a pretext for attack.” Russian Ambassador Vasily Nebenzya accused the U.S. of “whipping up tensions and rhetoric and provoking escalation,” saying, “You want it to happen.” Nebenzya left the room when Ukrainian Ambassador Sergiy Kyslytsya spoke. The Security Council adjourned after two hours of open debate and produced no actions or statements. Also on Monday, President Joe Biden and senators from both parties reiterated plans to implement “severe” sanctions on Russia if it invades Ukraine. Meanwhile, French and Russian leaders said they made “positive progress” in bilateral talks.

Some coverage engaged in sensationalism; the New York Times (Lean Left) called the U.N. debate a “bitter diplomatic brawl,” and several outlets used phrasing like “faced off,” “squared off” and “clashed.” Right-rated outlets were less likely to publish original coverage of this story. 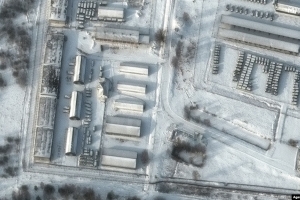 The United States and Russia faced off at the U.N. Security Council Monday over Washington's accusations that Moscow is planning a large-scale invasion of neighboring Ukraine, which the Kremlin has denied.

"The situation we're facing in Europe is urgent and dangerous, and the stakes for Ukraine – and for every U.N. member state – could not be higher," U.S. Ambassador Linda Thomas-Greenfield told council members. 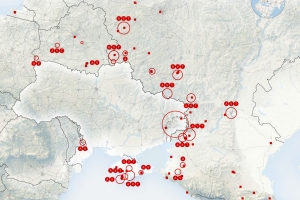 The United States and Russia engaged in a bitter diplomatic brawl Monday at the U.N. Security Council over the Ukraine crisis, as the Americans accused the Russians of endangering peace by massing troops on Ukraine’s borders while Kremlin diplomats dismissed what they called hysterical U.S. fearmongering.

“The situation we are facing in Europe is urgent and dangerous,” the United States ambassador, Linda Thomas-Greenfield said in her opening remarks. “Russia’s actions strike at the very heart of the U.N. charter.”

Read full story
Some content from this outlet may be limited or behind a paywall.
See full media bias rating for New York Times (News)
From the Right
303
Foreign Policy
US, Russia face off at UN Security Council over Ukraine crisis
New York Post (News) 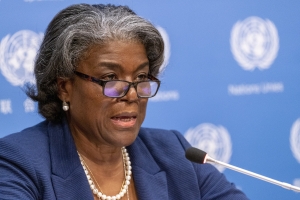 Ambassadors to the United Nations from the US and Russia traded verbal blows Monday during the first public meeting of the UN Security Council since the crisis in Ukraine came to a head.

“You are almost pulling for this,” he said, looking at Thomas-Greenfield. “You want it to happen. You’re waiting for it to happen, as if you want to make your words become a reality.”