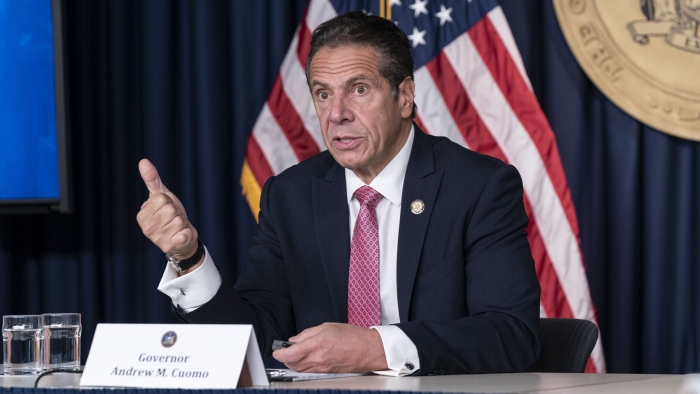 The New York Democratic lawmaker who claimed, last week, that Governor Andrew Cuomo threatened him over revelations about the governor’s COVID-19 nursing home order, is now openly calling for Cuomo to face an impeachment inquiry.

On Sunday, The Daily Wire reported that Democratic lawmakers in New York were “inching” toward an impeachment inquiry and that the inquiry had bipartisan support. Monday, New York State Assemblyman Ron Kim officially called for an investigation in a social media post.

The Food and Drug Administration said Friday evening that it will “rapidly work” to authorize the Johnson...

At any other time, the imminent House passage of a gargantuan $1.9 trillion bill that addresses many of the foundational goals of a new presidency would be...

Biden Says U.S. Will Distribute J&J Vaccine as Fast as It’s Made

The Most Likely Timeline for Life to Return to Normal
ANALYSIS

The end of the coronavirus pandemic is on the horizon at last, but the timeline for actually getting there feels like it shifts daily, with updates about viral...

President Joe Biden revoked on Wednesday a Trump-era order that temporarily banned green cards for certain groups of people outside the United States, the...

Nearly 1 in 5 adults and nearly half of Americans 65 and older have received their first dose of the coronavirus vaccine, White House senior adviser Andy...

A new stage in the pandemic: Cautious optimism
ANALYSIS

Like many Americans, Anthony Kellum is ready for the pandemic to be over. The Detroit-area real estate developer just wants to do usual things from his old...

The Labor Department on Thursday expanded eligibility for unemployment benefits to those who refused to return to work or declined a job offer because the...

On the day that New York governor Andrew Cuomo won his Emmy, the governor of West Virginia announced a plan to vaccinate his state. Since then, Governor Jim...

For months, some states have handed down stringent COVID restrictions to houses of worship deemed “nonessential,” leaving those institutions few options save...

Polls show most Americans support the federal COVID-19 relief bill. But if they knew what’s in it, they might feel differently. The bill is an affront to the...

House to vote on $1.9 trillion COVID plan Friday — with or without GOP backing

House Democrats will move forward with a vote Friday on President Biden’s $1.9 trillion COVID-19 relief package, regardless of if they are able to sway any...