Why are Democrats Boosting Pro-Trump Candidates in the 2022 Primaries?

Candidates endorsed by former President Donald Trump have done well so far in the 2022 midterm elections, with some help from Democrats. What's behind this confusing cross-party promotion?

The answer is relatively simple: Democrats believe their party's candidates have a better chance in the general elections against pro-Trump candidates than moderate Republicans.

In races across the country, Democratic party groups have crafted campaign ads that elevate messaging from candidates aligned with Trump, such as Kari Lake, the GOP gubernatorial nominee in Arizona, and John Gibbs, a Republican candidate for the House of Representatives from Michigan. Both Lake and Gibbs defeated more moderate Republicans in their primaries. Gibbs beat out Rep. Peter Meijer, one of the 10 House Republicans who supported Trump's impeachment.

Editorial boards across the political spectrum, from the liberal New York Times editors (Left bias) to those at the conservative National Review, criticized Democrats' attempts to meddle in 2022 Republican primaries "cynical" and hypocritical for boosting candidates that purportedly represent a threat to democracy, which many Democrats have said that Trump is. The Washington Post's (Lean Left bias) Paul Waldman took a different side, saying that "Democrats made a strategic judgment that struck a reasonable balance between risk and reward" and that the meddling "certainly won’t make the Republican Party any more of a threat to our system than it already is." 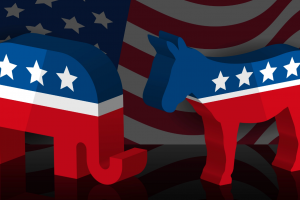 Democratic campaign organizations have been spending millions on ads for Republicans whom they call “extreme,” or “fringe,” hoping if those “extremes” win their primaries, they’ll be easier to beat in November.

It’s a strategy drawing criticism from many Republicans, Independents and even from many other Democrats, who argue it’s not just wrong, but that it’s hypocritical to call someone a threat to democracy and then possibly help them get elected.

“John Gibbs is too conservative for west Michigan,” a political ad on YouTube reads out.

The ad meant to oppose Republican John Gibbs was posted and paid for by... 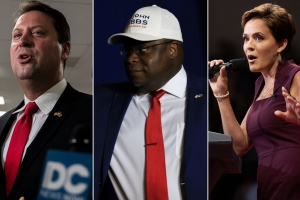 Republican primaries, which were once a sparring ground for ideas, have too often of late become battles over attitude and tests of personal loyalty to Donald Trump. Some candidates seek to prove their bona fides by embracing false claims about the 2020 election being stolen, precisely because they know that responsible opponents will be unwilling to do so. Too many campaigns revolve around the idea that candidates should be not just unyielding or combative but transgressive. When voters reward this behavior, it is imitated further.

Just as cynically, Democrats — while...

Read full story
Some content from this outlet may be limited or behind a paywall.
See full media bias rating for National Review
From the Left
18418
2022 Elections
Why criticism of Democrats for boosting radical Trumpists is wrong
Paul Waldman 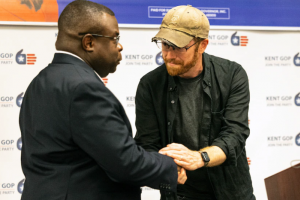 When moderate Republican Rep. Peter Meijer of Michigan was defeated in Tuesday’s primary, condemnation came swiftly. Not for John Gibbs, the far-right election conspiracist who narrowly beat Meijer, but for Democratic Party officials who boosted Gibbs’s campaign in an attempt to face a general election opponent who would be easier to beat in a district that leans slightly Democratic.

Gibbs is one of a number of such candidates Democrats have tried to help, and the response has been widespread outrage. Outside of the Democratic officials who made the decision to deploy this tactic, there seems to...