Snowden, 39, initially fled to Russia in 2013 after turning over NSA secrets to journalists. Russia granted him asylum in 2013 and permanent residency in 2020. Putin’s decree, which granted citizenship to 72 foreign-born individuals, came as Moscow partially mobilized the Russian military to respond to recent defeats in Ukraine.

Coverage was widespread, prominently featured and mostly balanced across the spectrum. Most coverage was initially brief, with some outlets offering live coverage.

Vladimir Putin signed a decree on Monday granting Russian citizenship to the US whistleblower Edward Snowden.

Snowden, 39, a former US intelligence contractor, has been living in Russia since 2013 to escape prosecution in the US after leaking secret files, published by the Guardian, that revealed vast domestic and international surveillance operations carried out by the US National Security Agency.

In 2020, Snowden said that he and his then-pregnant wife were applying for Russian citizenship in order not to be separated from their future son in an era of pandemics and closed... 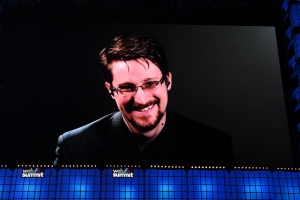 Driving the news: Snowden fled the United States and was given asylum in Russia after revealing classified documents about the U.S. government's mass surveillance program in 2013.

Snowden was granted permanent residency in Russia in October 2020, but his lawyers said at the time that he was not considering applying for Russian citizenship.

Anti-surveillance whistleblower — and accused spy — Edward Snowden was granted Russian citizenship Monday, according to a decree signed by Vladimir Putin.

The former NSA contractor was among 75 foreign nationals given Russian citizenship with the stroke of Putin’s pen.

Snowden has been living in Russia since 2013, when he fled there after leaking classified documents that revealed the mass surveillance of American citizens by their own intelligence apparatus.

The Russian passport was granted at Snowden’s request, according to Kremlin spokesman Dmitry Peskov.

News
Russia says it has fully withdrawn from Kherson, in a major blow to Putin
NPR (Online News)