A teenage gunman opened fire at a supermarket in Buffalo, NY on Saturday, leaving 10 people dead and three more wounded.

Payton Gendron, an 18-year-old white man, drove over 200 miles from Conklin, NY to Buffalo to conduct the attack. Heavily armed and donning tactical gear, he stormed into a Tops Friendly Markets in a predominately black neighborhood and opened fire with a rifle both inside the store as well as in the parking lot. The suspect also live-streamed the shooting on Twitch but the video was later removed from the platform. Gendron, who is now in custody, is being charged with first-degree murder. The FBI is investigating the shooting as a hate crime as well as a case of "racially motivated violent extremism." Buffalo Mayor Byron Brown told NBC News (Lean Left bias) on Sunday morning that the shooter "drove here with the express purpose of taking Black lives." President Joe Biden also commented on the tragedy, accentuating that there was no harbor for "hate-filled domestic terrorism."

Most outlets across the spectrum distinctly covered the facts and emphasized sources that confirmed the killer had "a plan to kill black people." HuffPost (Left bias) later emphasized that the shooter was motivated by an "online manifesto" touted by Tucker Carlson (Right bias) and other "far-right personalities" that claims "white Americans are at risk of being replaced by people of color by immigration, interracial marriage and eventually violence." Most right-rated outlets did not relate the crime to "white supremacist ideologies." 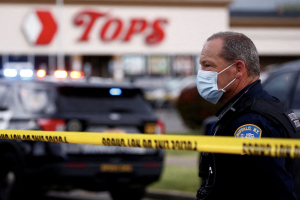 At least 10 people were killed and three more wounded Saturday after a gunman opened fire in a Buffalo, N.Y., supermarket in a mass shooting law-enforcement officials said they are investigating as a racially motivated hate crime.

Buffalo Police Commissioner Joseph Gramaglia said the suspect, an 18-year-old white male, drove to the Tops Friendly Markets store from out of town. He was heavily armed and wearing tactical gear and a helmet, Mr. Gramaglia said at a news conference.

The suspected shooter is from Conklin, N.Y., a suburb of Binghamton about...

Read full story
Some content from this outlet may be limited or behind a paywall.
See full media bias rating for Wall Street Journal (News)
From the Left
350
Violence in America
13 Shot, 10 Dead In 'Racially Motivated Hate Crime' At Buffalo Supermarket: Sheriff
HuffPost 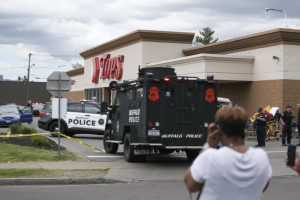 Ten people were killed and three others injured in what authorities have described as a “racially-motivated” shooting at a Buffalo, New York, supermarket on Saturday.

Police arrested Payton Gendron, an 18-year-old white male, after he ― armed with an assault rifle and wearing a tactical vest ― opened fire outside and inside the Tops Friendly Market. The market is in a predominately Black neighborhood, about 3 miles north of downtown Buffalo. 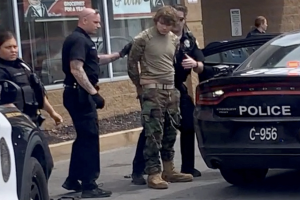 Ten people were killed and three more wounded in a shooting at a supermarket in Buffalo, N.Y., on Saturday, with the FBI saying it will investigate the shooting as a hate crime.

The suspect, an 18-year-old white male, arrived at a Tops Friendly Market store “heavily armed,” Buffalo Police commissioner Joseph Gramaglia told reporters at a press conference. Eleven of the victims of the shooting were black.

The suspect pleaded not-guilty to murder charges in court later on Saturday.

“It was straight-up, racially motivated hate crime from somebody outside of our community,...