At least five people were killed and 40 were injured after a man drove an SUV through crowds of dancers and paraders at a Christmas parade in Waukesha, Wisconsin on Sunday evening.

The suspect is in custody, and police say they're preparing to charge him with five counts of intentional homicide. Waukesha Police Chief Dan Thompson said Monday that 39-year old Darrell Brooks Jr. was leaving the scene of a domestic disturbance when he drove through the parade. Thompson said there's no evidence that the tragedy was a terrorist attack or that Brooks knew anyone in the parade. Brooks has been charged with 16 different crimes since 1999 and had two open cases in Milwaukee County prior to the tragedy. The only gunshots came from a policeman who fired at the vehicle. The casualty toll could grow as more information comes out.

The story was the top headline from outlets across the spectrum Monday. Most news sources on all sides worked to limit baseless speculation about a possible motive. Some right-rated voices focused on Brooks's criminal history, social media posts and possible motivations or contributing factors. Updated 11/22/21 at 4:15 p.m. 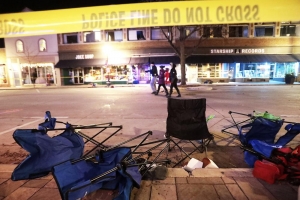 Investigators are looking into whether the SUV driver who plowed through a Christmas parade in suburban Milwaukee, killing at least five people and injuring more than 40, was fleeing from a crime, a law enforcement official told The Associated Press.

The joyous scene of marching bands and children dancing in Santa hats and waving pompoms turned deadly in an instant on Sunday, as the SUV sped through barricades and struck dancers, musicians and others.

One video showed a woman screaming, “Oh my God!” repeatedly as a group of young dancers...

Five people were killed and more than 40 were injured, including children, after a car plowed into a Christmas parade in Waukesha, Wisconsin , Sunday evening, prompting police to fire at the speeding vehicle.

The city acknowledged on Twitter that the numbers could change as more information becomes available.

The shocking scene unfolded around 4:30 p.m. local time. Waukesha Police Chief Daniel Thompson confirmed that an officer fired at the vehicle and that a suspect was in custody in what he called "a very fluid investigation."

"It is unknown at this time whether this incident has...

Read full story
Some content from this outlet may be limited or behind a paywall.
See full media bias rating for Washington Examiner
From the Left
3134
General News
At least 5 killed after SUV plows into Wisconsin holiday parade
CNN (Online News)

At least five people were killed and more than 40 were injured when an SUV plowed into a Christmas parade Sunday in Waukesha, Wisconsin, city officials said.

Crowds were bundled up along Waukesha's Main Street to enjoy the parade when a red SUV drove through a series of barricades and barreled onto the parade route around 4:39 p.m. local time, Waukesha Police Chief Daniel Thompson said.

Roads in the area will remain closed for at least 24 hours, Thompson added. Businesses along road where the incident took place should remain...