A federal judge ruled that President Trump may not block critics on Twitter, finding that doing so violates the First Amendment. 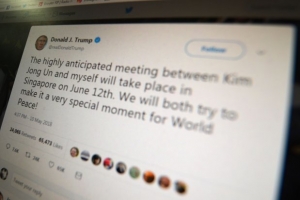 President Donald Trump may not block critics from reading his Twitter feed, a federal judge ruled on Wednesday, finding that doing so violates their right to free speech.

President Trump's decision to block his Twitter followers for their political views is a violation of the First Amendment, a federal judge ruled Wednesday, saying that Trump's effort to silence his critics is not permissible under the U.S. Constitution because the digital space in which he engages with constituents is a public forum.

A New York federal judge has ruled that President Donald Trump cannot block Twitter users for their political views after the President was sued in July 2017 by a free-speech group saying the president's actions violated the First Amendment.