Bevin has refused to concede, and could request a recount.

From the Center
308
Elections
In Kentucky And Virginia, A Strong Night For Democrats In Off-Year Elections
NPR Online News 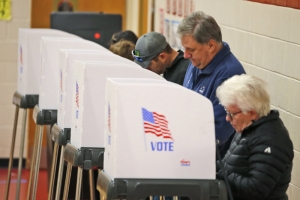 Democrats had a strong election night on Tuesday, leading the race for governor in Kentucky and taking back full control of the Virginia legislature for the first time in nearly a quarter century.

With all precincts reporting in Kentucky, Democrat Andy Beshear bested Republican Gov. Matt Bevin by 5,198 votes, or 0.36% of all votes cast. While The Associated Press says the race is too close to call, Beshear declared victory. Bevin refused to concede.

If Beshear's margin holds, it's a blow to President Trump, who rallied in the state... 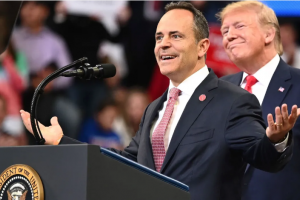 The official count is very narrow.

The gubernatorial election for Kentucky was called for the Democratic challenger Attorney General Andy Beshear on Tuesday, but Republican Gov. Matt Bevin refused to concede.

Beshear declared victory on Twitter and in a speech at his election rally.

"This is a close, close race, we are not conceding this race by any stretch," said Bevin to his cheering supporters.

"Understand this, we want the process to be followed," he continued. "And there is a process, we know for a fact that there have been...

Democrats’ claim of victory Tuesday in Kentucky’s gubernatorial race, as well as the Democratic takeover of the Virginia state legislature, left Republicans stumbling and increasingly uncertain about their own political fates next year tied to an embattled and unpopular president.

Many allies of President Trump rushed to explain away the poor performance of incumbent Kentucky Gov. Matt Bevin (R) as an anomaly, while other GOP veterans expressed alarm about the party’s failure in a state where Trump won by nearly 30 percentage points in 2016 — and where he just...

Democrats will lock down their roster of Senate candidates, while Jeff Sessions' comeback bid faces a wall of Trump-fueled opposition in Alabama. Democrats...

(CNN) -- One need not listen hard these days to hear the sound of Democratic pollsters and pundits gleefully cheering that the end of President Donald Trump's...

(CNN) - The city of Tulsa is experiencing a surge in coronavirus cases, a little over 2 weeks after President Donald Trump held a campaign rally in an indoor...

As Trump and Biden battle, election officials are running out of time, money for November

Heading into Georgia’s June 9 primary, McDuffie County Elections Director Phyllis Brooks had no choice but to assemble a last-minute crew to count votes....

USA TODAY
Elections
Polls show Trump is losing to Joe Biden. They said the same thing 4 years ago against Hillary...

WASHINGTON – Joe Biden can look at the polls and smile. Cautiously. A double-digit advantage in numerous national surveys, solid leads in a number of...

Thousands of Mail-In Ballots Rejected for Coming Too Late

At least 65,000 mail-in or absentee ballots already have been rejected in this year's primary elections because they arrived past the deadline or contain other...

A promise of economic nationalism, an expensive infrastructure bill that’s really a make-work program, prejudice against foreigners, denunciations of Wall...