Immigration, race and racism, Inequality
Save for Later
From The Left 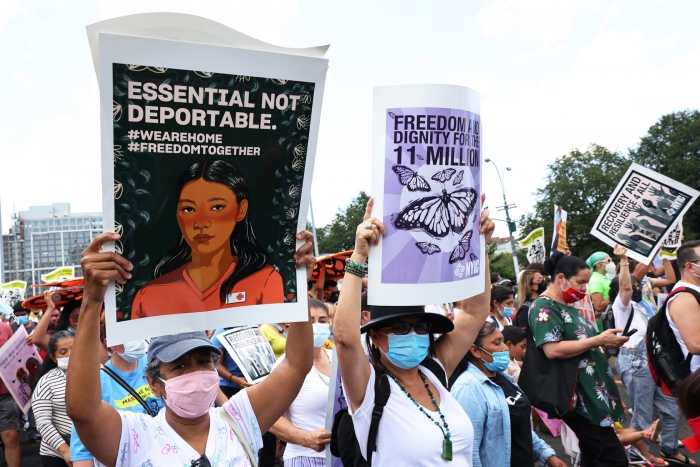 WASHINGTON – For decades, lawmakers and immigrant advocates have been working to pass immigration reform on Capitol Hill, often looking to pass bipartisan legislation to extend protections and pathways to citizenship for farmworkers and those who are undocumented.

Success has been elusive, but advocates and some members of Congress see the $3.5 trillion budget bill that Democrats and President Joe Biden want to pass this fall as one of their best bets of passing sweeping changes to the nation's immigration laws.

Democrats are hoping to include in the bill pathways to citizenship for people who were brought to the United States as children and do not have legal status, also known as Dreamers, in addition to farmworkers and essential works. But including such a provision may be an uphill battle.

Not only will Democrats need support from all Democrats – including moderates – the provision would also need to be accepted by the Senate parliamentarian,a chamber official who could strike the provision from the bill if it doesn't meet certain rules.

Read full story
Some content from this outlet may be limited or behind a paywall.
Immigration, race and racism, Inequality

Immigration Isn’t the Issue — National Identity Is
The American Spectator

News
‘People will always come’: Inside a Haitian’s journey without end
Washington Post

Opinion
Trump Is Gone, But the US Is Still Putting Migrants Through Hell
TruthOut

News
How much blame does Biden shoulder for immigration struggles?
Yahoo! The 360

Opinion
Amnesty Is Unfair to Legal Immigrants Like Me
National Review

News
Biden in a bind on the border: 'The politics finally got the better of their policy'
NBC News (Online)