Learn more about Lean Left ratings
Go to USA TODAY
Possible Paywall
Some content from this source may be limited or behind a paywall.
Contents

USA TODAY is featured on the AllSides Media Bias Chart™.

USA TODAY is a news media source with an AllSides Media Bias Rating™ of Lean Left.

USA Today has partnered with AllSides and other bridging organizations, such as America Talks, to promote and support conversation events in which people on the left and right come together to bridge divides. This is work AllSides applauds and is a part of. This media bias rating page serves purely as an analysis of the bias of USA Today's reporting and content.

AllSides editors conducted an independent review of USA Today's "Today's Debate" section in July 2021. We determined it also had a Lean Left bias.

We noted bias by viewpoint placement, as readers generally had to read the opinion of the USA Today editorial board first (marked "Our View") before seeing the alternative view. USA Today's view was consistently Lean Left or Left, and always leading with a Left or Lean Left view constitutes a Lean Left bias. Often, the view opposing USA Today's view was just a different left-wing perspective.

For example, USA Today featured an unbalanced debate on the proposed election reform law titled For the People Act. USA Today's view was a moderate left position, in which they agreed with some aspects of Democrat Sen. Manchin’s position and disagreed with other aspects of it, titling their piece, "Sen. Joe Manchin has good ideas on voting rights, and one very bad idea." The opposing argument was the left wing / anti-GOP argument, titled "For the People Act will protect democracy." USA Today did not include right arguments against the law or non-partisan concerns about federalizing elections.

We did not see a position from a Lean Right or Right perspective, whether it was USA Today's or an opposing view, until their 11th headline. Most pieces were positions held by moderate Democrats. There was a right-wing opinion featuring opposition to mandatory vaccines, and a guest piece from a Republican Senator, but overall the section consistently leans left.

During an Editorial Review, the AllSides team, which is made up of people from the left, center, and right, review the works of a media outlet in the past six months, looking for the common types of media bias, and come to a general consensus on its bias.

The team noted a consistent omission of stories that were important to folks on the right — for example, in June and July 2021, prominent stories on the right regarding businesses struggling to hire due to covid-era unemployment benefits, the high price of gas, and rising crime and gun violence in US cities were not prominently featured. AllSides noted USA Today's top coverage had a consistent focus on social justice issues and climate change. (Coverage of such topics does not denote left-wing bias - center and to a lesser extent right outlets also cover these issues - but many on the team felt that the prominent and continual priority of these topics above so many others did indicate a left leaning bias.)

The team found that USA Today frequently leads its stories with left-wing viewpoints, and quotes people and organizations from the left more prominently than those from the right. Quotes from people with alternative or right-wing perspectives are either omitted entirely, or included much farther down in the article. We also noted anti-Trump bias.

The team had been detecting a leftward shift in USA Today's content for some time. One team member with a Center bias said, "USA Today probably has a lot of talented journalists, but they’re falling into groupthink — there don't seem to be enough voices proposing stories that seem to be big with conservatives online."

Some other examples of left-wing bias spotted during our review:

USA Today’s Fact Check section has a Lean Left bias, according to a July 2021 Small Group Editorial Review by AllSides editors on the left, center, and right.

It is worth noting much of the fact-checking page is focused on viral social media posts or unfounded theories. However, left-leaning bias is visible in regards to story choice because when USA Today does fact-check politics, it tends to select issues associated with the left, such as President Biden support, immigration, and coronavirus vaccine safety. It also “fact checks” comments that are subjective interpretations by adding more context.

USA Today is a signatory of the code of principles from the International Fact-Checking Network (IFCN), created by Poynter.

The results of our April/May 2021 Blind Bias Survey indicated people across the political spectrum on average rated USA TODAY as Lean Left. Because our rating for USA TODAY at the time was Center, AllSides conducted an Editorial Review, which was inconclusive.

A reviewer with a Lean Right bias argued USA TODAY should be rated Lean Left; the rest of the reviewers either believed USA TODAY is Center, or were on the fence between a Lean Left and Center rating. Many believed they did not yet have sufficient data to change our rating. There was no general consensus, making the review inconclusive. AllSides vowed to do another review in a few weeks (see our follow-up review results here.)

A reviewer with a Center bias said they saw USA TODAY as Center, and argued their articles were quite balanced, pointing to an article about a South Dakota Tribe and Gov. Kristi Noem debating about fireworks that "didnt frame one side or the other as being in the right or the wrong"  and a piece about the House approving $2B for a Jan 6 commission and the GOP taking issue as being balanced. "For the most part what I saw was balanced language and sourcing," they noted. They also pointed to USA TODAY's debate section as evidence of balance, pointing to numerous editorials and other articles they saw as evidence of balance.

The editor who saw USA TODAY as Lean Left pointed to a proliferation of left-wing story choices, including numerous stories about racism, green energy, transgender issues, and other social justice initiatives. They noted no coverage critical of critical race theory during a time when the right was particularly concerned about this issue; they noted left-wing word choice, such as USA TODAY referring to "gender-affirming care" as opposed to language such as "hormone replacement therapy" or "gender transition procedures." They noted coverage about a purported rise in violence against Asian Americans "did not include context that would reveal the media narrative is largely fear-mongering," and noted the use of subjective qualifiers such as "violent and misogynistic comments" in a story about social media comments (instead of posting the comments and letting readers decide if they are violent/misogynistic for themselves).

They and other reviewers noted USA TODAY does not always interview both sides, commiting bias by viewpoint placement; for example, a story about a Texas abortion law did not interview anyone in favor of the new law, instead only interviewing four people opposed, such as spokespersons from Planned Parenthood and the ACLU.

A reviewer with a Lean Right bias was on the fence about USA TODAY's bias, but saw their political cartoons section as balanced. They noted "USA TODAY is more left than I thought," and pointed to a story titled, "Ilhan Omar target of violent, misogynistic comments on Madison Cawthorn post to Telegram" was "a particularly nutty choice" considering "the original tweet had 199 comments, which were certainly awful, but less than 200 comments on a post about a Congressional rep is not front-line national news worthy of being the second, top story on a major news site. Lots of things online get a lot more than 200 comments."

A team member with a Center bias noted "a lot of left-leaning story choices, particularly about the systemic racism narrative," but found the body of their articles to be "pretty balanced — sometimes in a few articles they just give preference to left-leaning quotes, and sometimes they don't include right-leaning quotes at all." They also found the homepage balanced on Jan. 7 and 8, two days after the Capitol riot. They noted that on inauguration day, Jan. 20, 2021, the homepage read: “Democracy has Prevailed - Biden Urges Shaken US to regain footing.”

Because the team did not reach consensus and many members were unsure if USA TODAY was Center or Lean Left, the team scheduled another review for a month later. Give us feedback: vote on USA TODAY's rating at the very top of this page. 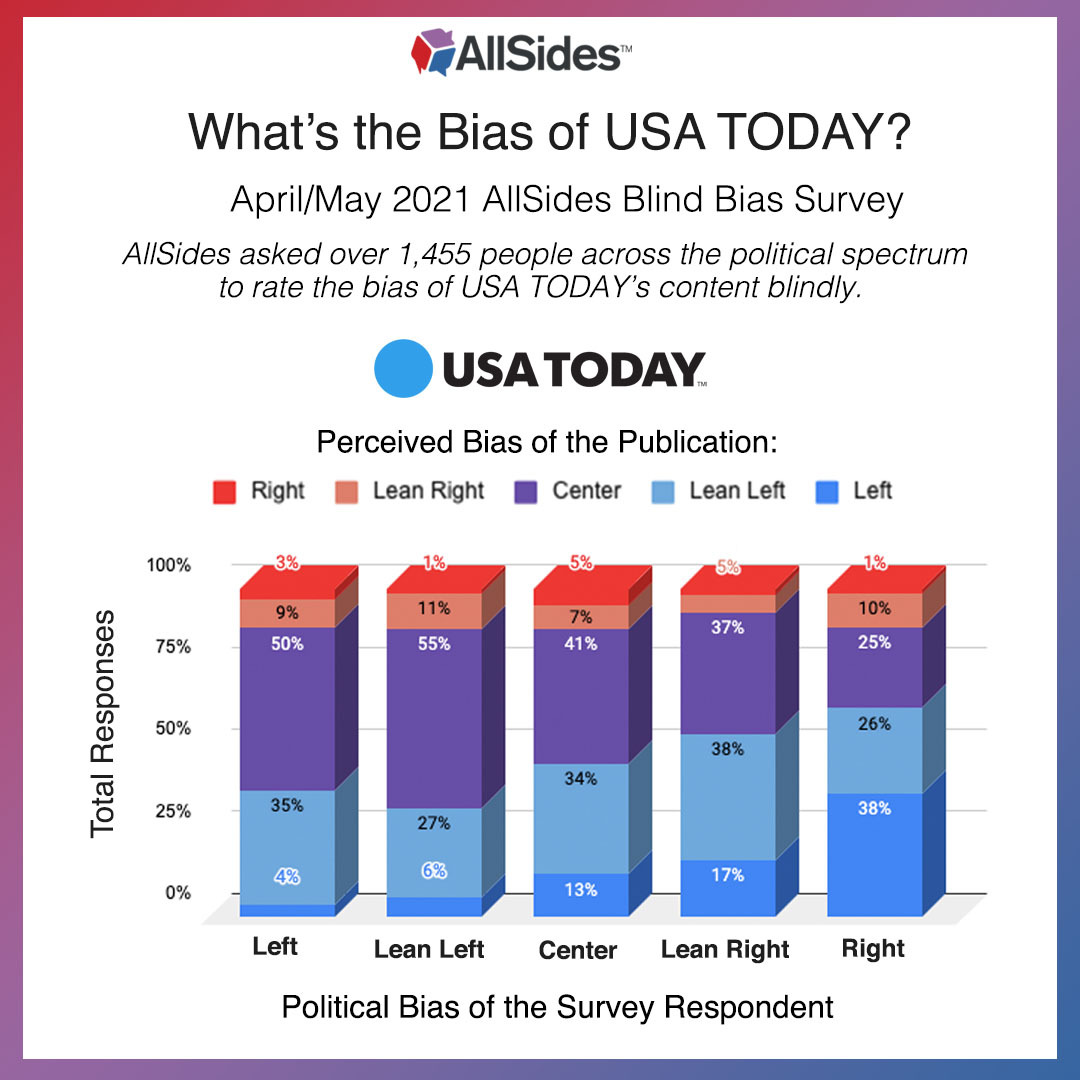 People who self-reported they have a Left or Lean Left bias rated USA TODAY on average as being just between Center and Lean Left; respondents who rated themselves as Center, Lean Right and Right on average rated USA Today as firmly Lean Left.

The average rating of all bias groups was Lean Left.

This Blind Survey triggered our May 2021 Editorial Review, which was inconclusive; AllSides kept USA TODAY's rating as Center but planned a second review a month later.

As of January 2023, people have voted on the AllSides Media Bias Rating for USA TODAY. On average, those who disagree with our rating think this source has a Lean Left bias.

USA Today was rated Center by AllSides until July 2021, when we moved it to Lean Left.

As of April 2017, the majority of AllSides users who voted agreed with our bias rating of Center. As of July 2016, the average rating of all community feedback (agree and disagree) was Center, but much closer to Lean Left.

As of January 2023, AllSides has high confidence in our Lean Left rating for USA TODAY. Three or more bias reviews have affirmed this rating or the source is transparent about bias.

In Oct. 2020, USA TODAY's Editorial Board endorsed Democrat Joe Biden for president. This broke precedent as the board had never in its 38 years of existence endorsed a candidate for president until then.  In 2016, the board urged voters to reject Donald Trump, but did not explicitly endorse a candidate.

"We don't do this eagerly," said editorial page editor Bill Sternberg. "We hope we don't have to do it again, but it seems like one of those break-glass moments where there's a clear and present danger and there's a clear choice."

From USA TODAY's About page: "USA TODAY is a multi-platform news and information media company. Founded in 1982, USA TODAY's mission is to serve as a forum for better understanding and unity to help make the USA truly one nation. Through its unique visual storytelling, USA TODAY delivers high-quality and engaging content across print, digital, social and video platforms. An innovator of news and information, USA TODAY reflects the pulse of the nation and serves as the host of the American conversation – today, tomorrow and for decades to follow. USA TODAY and USATODAY.com reach a combined seven million readers daily. USA TODAY is a leader in mobile applications with more than 21 million downloads on mobile devices. USA TODAY is owned by Gannett Co., Inc. (NYSE: GCI)."