voting rights and voter fraud, Florida, Ron DeSantis
Save for Later
Add to My Front Page
From The Center 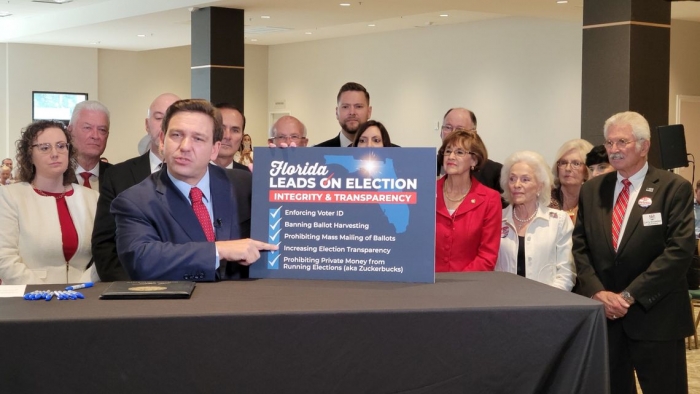 During a nationally televised event hosted by a fan club of former President Donald Trump, Gov. Ron DeSantis on Thursday signed into law contentious and wide-ranging changes to the state’s voting system, including provisions targeting voting by mail and limiting the use of ballot drop boxes.

Read full story
Some content from this outlet may be limited or behind a paywall.
voting rights and voter fraud, Florida, Ron DeSantis

Black Americans have worse voting rights now than in 1965
OPINION

On Tuesday, a cadre of the nation’s top civil rights leaders — from the head of the NAACP to the Rev. Al Sharpton — met with Sen. Joe Manchin, D-W.Va...

Arizona state Senate Republicans’ “audit” of 2020 election results in Maricopa County is so unprofessional and illegitimate that many election officials won’t...

Democratic Sen. Joe Manchin on Sunday defended his decision to vote against a sweeping voting rights bill and reiterated his opposition...

Texas Democrats' boldest action this legislative session came in the 11th hour of the second-to-last day of the 140-day gathering. In a discrete but...

Passing new election laws has been one of the top priorities for Republican state legislators in 2021 — and they are working from similar playbooks to tighten...

Vice President Harris will meet next week with Texas state Democrats who helped block passage of an elections law bill that would have made it more difficult...

States are passing a record number of voting restrictions

Republican state legislatures have passed a record number of bills curtailing voting access in the first five months of 2021, the year after a national...

The indictment of a far-right internet activist on charges of interfering with the 2016 U.S. election reflects a strategic shift by the Department of Justice...

Poll: 53 Percent of Republicans Believe Trump Is the ‘True President’

A new poll finds that a majority of Republicans believe that former President Donald Trump is the “true president.”A new Reuters/Ipsos poll...

An election assessment conducted in a Pennsylvania county months ago and quietly released to the public in recent weeks uncovered five...

The For The People Act appears doomed in the Senate, but congressional deliberations over securing the vote surely will continue. Support...

Did Dominion Voting Systems Lose Its Lawsuits Against Giuliani and Powell?
FACT CHECK