Space, Mars, Science
Save for Later
Add to My Front Page
From The Center 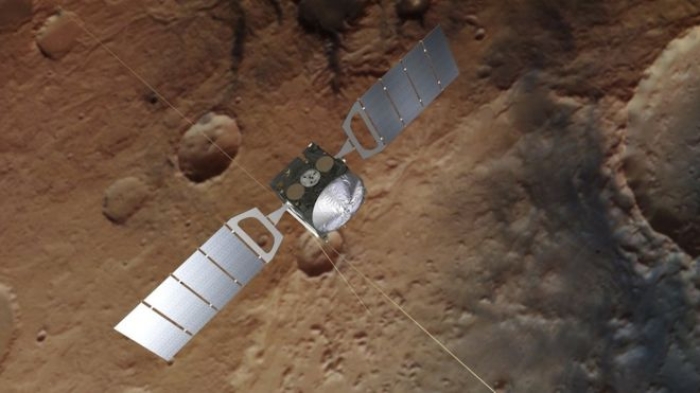 Three new underground lakes have been detected near the south pole of Mars.

Scientists also confirmed the existence of a fourth lake - the presence of which was hinted at in 2018.

Liquid water is vital for biology, so the finding will be of interest to researchers studying the potential for life elsewhere in the Solar System.

But the lakes are also thought to be extremely salty, which could make it difficult for any microbial life to survive in them.

Billions of years ago, water flowed in rivers and pooled...

SpaceX launches 4 astronauts to ISS on recycled rocket and capsule

A new way of putting private money where the forests are

The U.S., Norwegian and British governments have joined forces with a group of big companies to cut greenhouse gas emissions by rewarding countries that put a...

NASA's Ingenuity drone helicopter on Monday successfully flew a short test flight on Mars, the first powered flight on another planet. "This really is a...

Antiscience has emerged as a dominant and highly lethal force, and one that threatens global security, as much as do terrorism and nuclear proliferation. We...

A DNA Sequencing Revolution Helped Us Fight Covid. What Else Can It Do?
ANALYSIS

Edward Holmes was in Australia on a Saturday morning in early January 2020, talking on the phone with a Chinese scientist named Yong-Zhen Zhang who had just...

Two House Republicans are demanding that the Environmental Protection Agency provide records related to a decision by the agency’s new leader to remove dozens...

The company that modern capitalism couldn’t survive long without
ANALYSIS

The world is running short of semiconductor chips—running so short that Subaru has temporarily closed a plant in Japan, 5G network rollouts are delayed, Apple...

The presumed influence of election misinformation on others reduces our own satisfaction with...
ANALYSIS

Pervasive political misinformation threatens the integrity of American electoral democracy but not in the manner most commonly examined. We argue the presumed...

Newly-released documents suggest that one of the country’s most powerful teachers’ unions shaped Biden administration policies on the reopening of schools,...

Scientists Discover Water Vapors Rising From Mars, Suggesting Planet May Have Been Habitable

Water vapors rising from Mars suggest the planet may have been habitable, according to research published Wednesday in the journal Science Advances....

New COVID-19 Strain Could Be Vaccine-Resistant Due To New Mutation, Study Finds

A new study from Public Health England found that the COVID-19 variant first discovered in the United Kingdom in December could be more resistant to vaccines...

A year forever defined by COVID-19 and a controversial U.S. presidential election has added another item to its resume — second-hottest year on record....