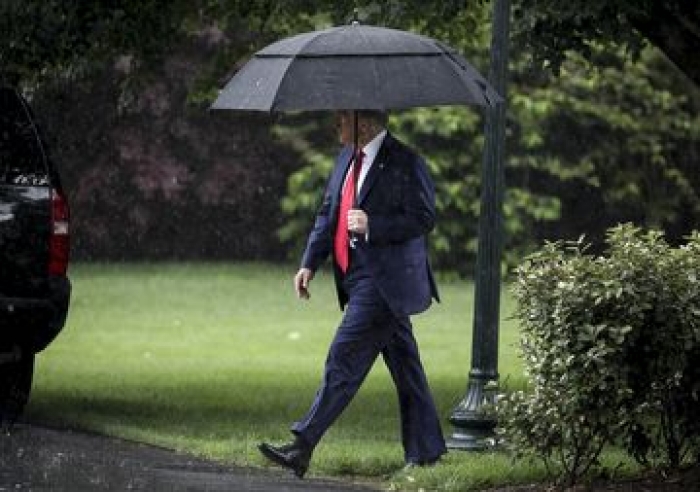 President Donald Trump said his rally in Tulsa, Oklahoma, on June 19 will be moved to the next day because of the Juneteenth observance and after criticism of the choice of date.

Juneteenth, which takes place on June 19, commemorates the day in 1865 on which enslaved people in Texas belatedly learned that slavery in the U.S. had been abolished. The date is not recognized as a federal holiday and is largely commemorated within the U.S. African American community.

First it was fear, now it's rage. Following up on his 2018 best-selling book "Fear," legendary investigative journalist Bob Woodward's new book on President...

As President Donald Trump hints that he plans to deliver his nomination speech from the White House on Aug. 27, the hotel bearing his name down the street is...

As three former presidents gathered in Atlanta last week to offer stirring tributes to John Lewis, President Trump was absent. In an interview that aired...

Video posted to social media shows that President Donald Trump's speech in Texas was attended by a crowd who largely refused to wear masks or maintain social...

Donald Trump has never pretended to practice traditional Christian virtues. Yet in 2016 he earned 81 percent of the white evangelical vote—a higher percentage...

President Trump tweeted Monday that he'll deliver his speech accepting the Republican nomination for president at either the Gettysburg battlefield in...

President Trump dismissed the legacy of the late Rep. John Lewis in an interview with “Axios on HBO,” saying only that Lewis made a “big mistake” by not coming...

Revenues for President Trump’s Mar-a-Lago resort and two other properties were revealed Friday night in a financial disclosure form provided to the federal...

Trump did not attend John Lewis' funeral. Here are 4 other major funerals he missed while...

Former President Barack Obama appeared to take a jab at President Donald Trump at the funeral service of the late Rep. John Lewis in Atlanta on Thursday. "...

Trump: ‘A lot of people’ think Edward Snowden ‘not being treated fairly’

President Trump polled his aides on Thursday about whether he should let anti-surveillance whistleblower and leaker Edward Snowden return to the US from Russia...

Trump Plans To Give Convention Speech On White House Grounds

President Trump says he will deliver his speech accepting the presidential nomination during the Republican National Convention speech from the White House...

President Donald Trump congratulated Marjorie Taylor Greene, a businesswoman who has expressed support for the conspiracy theory QAnon, for her Congressional...

In an obvious appeal to Evangelical voters, President Trump said that Democrats are “against the bible.” Speaking with Fox News correspondent-at-large...

Trump withholds praise for John Lewis, notes he 'didn't come to my inauguration'