‘Not God’s Plan’: Marco Rubio Drops Out of Presidential Race 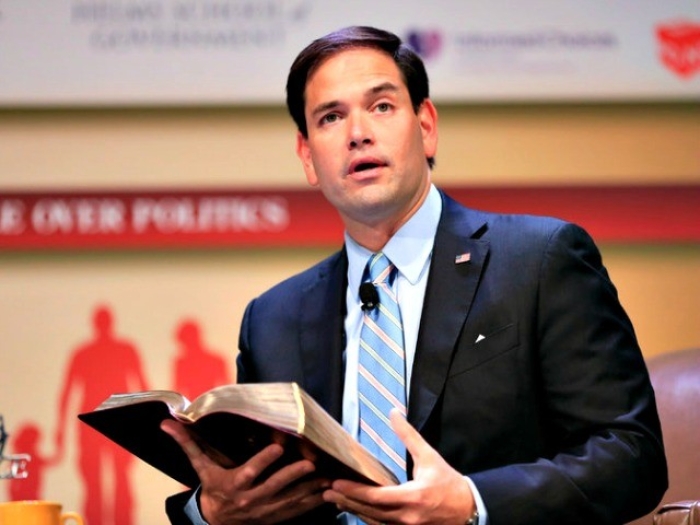 Sen. Marco Rubio (R-FL) officially suspended his campaign for president this evening after losing to billionaire presidential candidate Donald Trump in Tuesday’s primary election in Florida.
“So while it is not God’s plan to be president in 2016 or maybe ever, and while today my campaign is suspended, the fact that I’ve even come this far is evidence of how special America truly is,” he said.

Biden campaign faces questions about whether he should skip next debates

The campaign insisted he would participate in the final two, but some Democrats said he should demand rule changes. The moment Joe Biden’s first debate...

It was 90 minutes of chaos in a year of upheaval. But did it matter? President Trump and Joseph R. Biden Jr. appeared onstage together for the first time on...

Biden’s appeal: Is being the ‘anti-Trump’ enough?

Joe Biden doesn’t inspire strong enthusiasm – or hatred. In a year punctuated by a pandemic and economic and social turmoil, he’s positioning himself as a...

The two candidates constantly spoke over each other in exchanges more notable for rancor than policy nuance. President Trump and Joe Biden clashed over the...

President Donald Trump and Democratic challenger Joe Biden will campaign on Wednesday in three U.S. states that will play a key role in the November election,...

A raucous and chaotic clash between President Trump and former Vice President Joe Biden gave Americans their first chance to weigh their choices side by side...

The first debate of the 2020 presidential election on Tuesday night was fiery from beginning to end. President Trump and Democratic presidential nominee Joe...

Director of National Intelligence John Ratcliffe revealed that U.S. intelligence had learned of claims from Russian intelligence that former Secretary of State...

CLEVELAND -- President Trump is asking for an additional ground rule ahead of Tuesday night’s first presidential debate between himself and Democratic...

Joe Biden’s (D) team has reportedly rejected the Trump campaign’s request to have the former vice president’s ears inspected for an electronic device prior to...