Submarine Deal Between Australia, UK and US Draws Criticism from France and China

Australia, the United Kingdom and the United States announced a new trilateral security partnership on Wednesday, prompting criticism from France and China on Thursday. The partnership, dubbed “AUKUS,” will help Australia develop a fleet of nuclear-powered submarines — which will not be armed with nuclear weapons — allowing Australia to challenge China’s broad territorial claims in areas like the South China Sea. French leaders said Thursday that they were not consulted on the deal, which effectively ended France’s multi-billion dollar 2016 deal to sell less sophisticated submarines to Australia. As a result, France canceled an upcoming gala to honor French-U.S. relations, and Secretary of State Antony Blinken released a statement calling France a “vital partner” in “transatlantic cooperation in the Indo-Pacific and around the world.” Chinese Foreign Ministry spokesman Zhao Lijian said the U.S. and U.K. had a “cold war mentality” and were “applying double standards, which is extremely irresponsible.”

Coverage differed on the price tag of France’s 2016 submarine deal; The New York Times said $66 billion, The Guardian said $90 billion, and Fox News said $40 billion. Coverage was widespread across the spectrum and mainly focused on Chinese and French criticism on Thursday evening. 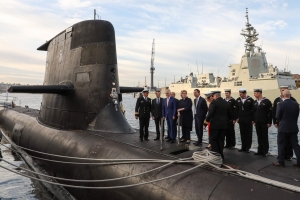 President Biden’s announcement this week of a deal to help Australia deploy nuclear-powered submarines has strained the Western alliance, infuriating France and foreshadowing how the conflicting American and European responses to confrontation with China may redraw the global strategic map.

Read full story
Some content from this outlet may be limited or behind a paywall.
See full media bias rating for New York Times (News)
From the Center
303
Foreign Policy
Aukus: China denounces US-UK-Australia pact as irresponsible
BBC News

China has criticised a historic security pact between the US, UK and Australia, describing it as "extremely irresponsible" and "narrow-minded".

The deal will see the US and UK give Australia the technology to build nuclear-powered submarines for the first time.

It is being widely viewed as an effort to counter China's influence in the contested South China Sea.

The region has been a flashpoint for years and tensions there remain high. 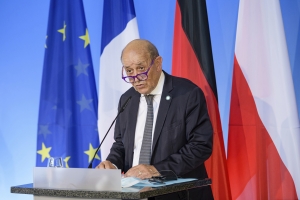 After calling the Biden administration’s failure to include France in the national security pact with the United Kingdom and Australia a “stab in the back,” French officials on Thursday canceled a gala at their Washington embassy, a new report says.

French officials canceled the Friday affair, which was set to commemorate the “240th Anniversary of the Battle of the Capes” at the embassy and on a French frigate in Baltimore, Maryland, according to the New York Times.