House Speaker Nancy Pelosi (D-CA) announced on Thursday that she will step down from party leadership, ending her two-decade long stint at the helm of the House Democrats. The news was followed by speculation of her replacement, as well as reflection on the legacy she will leave behind.

How the Media Reacted: A writer in the New York Times Opinion outlined the political climate Pelosi navigated to determine, “her most important acts of leadership have come at some of the nation’s lowest moments.” Jonathan Bernstein called Pelosi the “best speaker of the House of the modern era,” citing her ability to advance legislation during an era of increasing partisanship. The Washington Post (Lean Left Bias) Editorial Board praised Pelosi for breaking down gender barriers, stating, “she has inspired and helped usher into politics countless women.”

A writer in the Daily Wire (Right Bias) said “good riddance” to Pelosi, referencing her abortion and immigration stances to determine America was “ruthlessly gutted of blue-collar jobs, strong borders, and precious life” during her time as speaker. John Podhoretz called Pelosi a “great legislator,” later adding, “if you like the game of politics, you have to enjoy someone who plays it masterfully even if she’s on a team you dislike.” An article in Reason (Lean Right Bias) labeled Pelosi a “shrewd and ruthless politician” that “hung around for too long.”

For Context: Pelosi has served in congress since 1987, representing California’s 12th Congressional district. She has served as Democratic House leader since 2003. 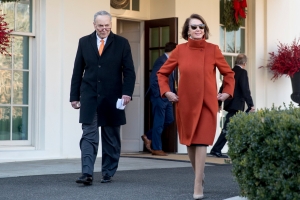 When Nancy Pelosi first took up the speaker’s gavel in January 2007, it was amid soaring talk of making history and breaking barriers. “For our daughters and granddaughters, today we have broken the marble ceiling,” she proclaimed at her swearing-in. “Now the sky is the limit. Anything is possible.”

Sixteen years, four presidents, two impeachments, one pandemic and a failed insurrection later, Ms. Pelosi will soon hand over that gavel for good and step down from House leadership amid a darker, more divided political landscape than she likely imagined in...

Nancy Pelosi Is the Greatest Speaker in History
Jonathan Bernstein 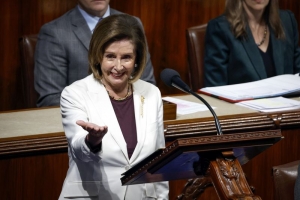 Nancy Pelosi has been simply the best speaker of the House of the modern era. She is probably the best speaker in US history. It was time for her to step down from her leadership role, but it likely will be a long time before we see someone of either party master the job as well as she did.

Her four terms as speaker, two during unified Democratic government and two under Republican presidents and divided government, were unusually productive. During President Barack Obama’s first term, when Democrats controlled both houses of Congress, she steered the Affordable Care... 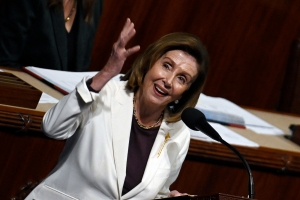 Nancy Pelosi, who announced she would not continue as the Democratic Party’s leader in the House of Representatives, has been a great legislator. You’d have to be to last for 19 years at the top of the Democratic legislative greasy pole.

That doesn’t mean she has been a great font of ideas, a great visionary, or a great leader of the American people. She has been none of those things.

Her own contributions to this country on matters of policy, rather than shepherding or opposing bills in the House, have...