Pelosi Steps Down from Party Leadership, Will Remain in Congress

Speaker of the House Nancy Pelosi (D-CA) announced on Thursday that she will step down from her role as democratic house leader, remaining in congress as a rank-and-file member and serving as a mentor for rising members of the party.

Key Quotes: Addressing congress, Pelosi stated, “with great confidence in our caucus, I will not seek re-election to Democratic leadership in the next Congress.” She added, “for me the hour's come for a new generation to lead the democratic caucus that I so deeply respect. And I am grateful that so many are ready and willing to shoulder this awesome responsibility.” She will remain in congress, “speaking for the people of San Francisco, serving the great state of California and defending our Constitution.”

For Context: In October, Pelosi’s husband was hospitalized after being beaten with a hammer by a home intruder allegedly looking for the House Speaker. The announcement comes one day after the Republican Party secured a majority in the House of Representatives. Pelosi has led the house democrats since 2003 and served two four-years terms as house speaker.

How the Media Covered It: The announcement was covered across the spectrum, with most outlets connecting the attack on Paul Pelosi to her decision to step down as leader. Articles speculated who will take up the reins of leadership in the party and listed the accomplishments made by Pelosi during her two-decades as leader. 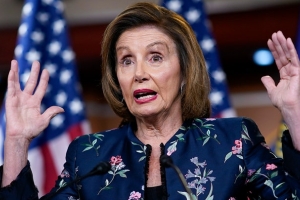 House Speaker Nancy Pelosi announced she will not seek re-election as leader of the House Democratic Conference after nearly 20 years at the helm, after her party narrowly lost the majority in the chamber in the midterm elections.

"With great confidence in our caucus, I will not seek re-election to Democratic leadership in the next Congress," said Pelosi. "For me the hour has come for a new generation to lead the Democratic caucus that I so deeply respect, and I'm grateful that so many are ready and willing to shoulder... 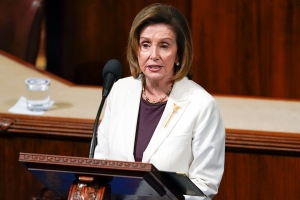 House Speaker Nancy Pelosi says she will not run for a leadership post, a move that marks the end of an era and sets up a major shakeup for House Democrats.

In a speech on the House floor Thursday, Pelosi touted the party's legislative achievements under her leadership before saying: "Now we must move boldly into the future."

"The hour's come for a new generation to lead the democratic caucus," the speaker said.

Pelosi said she will continue "speaking for the people of San Francisco" as their congresswoman, but not...

End of an era: Pelosi steps down as House Democratic leader
The Hill 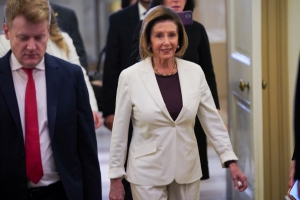 The Nancy Pelosi era has come to an end.

After leading the Democrats for the last two decades, the House Speaker announced Thursday that she will step down next year from her spot at the top of the party, closing a momentous run for the most powerful woman in U.S. history while clearing the way for a younger generation of up-and-coming lawmakers to climb into the leadership ranks.

The announcement, which came shortly after late midterm results had officially flipped House control to the Republicans, sent shockwaves across Capitol Hill,...