For Context: Jeffries, 52, is widely seen as a successor to House Speaker Nancy Pelosi (D-Calif.), who said earlier this month that she would step back from House Leadership. He is the first black American elected to lead a major party in Congress, after running for the position unopposed. His district includes a large part of Brooklyn, NY. Furthermore, Rep. Katherine Clark (D-Mass.) was elected as Democratic whip, and Rep. Peter Aguilar (D-Calif.) was picked as caucus chairman. On the other side of the aisle, Rep. Kevin McCarthy (R-Calif.) has faced doubts over whether Republicans would back his bid for House Speaker.

Key Quotes: After the vote, Jeffries said his mandate was to “advance the ball for everyday Americans and get stuff done.” Rep. Josh Gottheimer (D-N.J.) told the Washington Examiner (Lean Right bias) that Jeffries was a “bridge builder” who “has always believed in reaching out to members from across the spectrum to unite the party.”

How the Media Covered It: Coverage was common across the spectrum on Wednesday. Coverage from the left was more likely to prominently highlight Jeffries’ race, often describing his election as “historic.” While coverage from the right was generally neutral, sometimes focusing more on Pelosi, past coverage of Jeffries has been critical; a Washington Examiner opinion headline from November 18 called him an “election-denier.”

House Democrats elected Rep. Hakeem Jeffries of New York as their next party leader in a unanimous vote on Wednesday, ushering in a generational shift as Democrats prepare to relinquish control of the lower chamber in January.

Long considered a rising star in the party, the 52-year-old Jeffries will make history as the first Black party leader in either chamber of Congress. He takes the reins from Speaker Nancy Pelosi, who has served as House Democratic leader since 2003. Pelosi, 82, announced earlier this month that she would not seek another leadership... 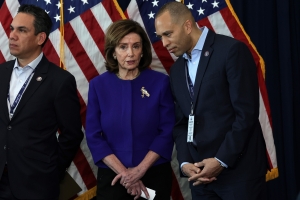 House Democrats elected Rep. Hakeem Jeffries as their leader Wednesday, making the Brooklyn and Queens lawmaker the first black person to lead either party in the chamber and ushering in a new generation of Dem leadership after House Speaker Nancy Pelosi announced earlier this month she would step aside after 20 years in charge.

Jeffries, 52, was selected by his colleagues during a closed-door meeting on Capitol Hill after they lost control of the chamber in the Nov. 8 midterm elections.

“It’s a solemn responsibility that we are all inheriting. And the best...

House Democrats on Wednesday elected Rep. Hakeem Jeffries (N.Y.) to head the party in the next Congress, marking a generational shift after 20 years under the reign of Rep. Nancy Pelosi (Calif.) while making Jeffries the first Black figure to lead either party in Congress in the nation’s history.

The shift was no surprise. After Pelosi and her top deputies announced earlier in the month that they would step out of the top three leadership spots next year, Jeffries was one of three next-generation leaders who quickly swept in to solidify their place as...