FBI agent Peter Strzok on Thursday testified in front of Congress, engaging in a series of tense exchanges about whether or not his bias against Donald Trump influenced his work on the Russia probe. Some argue that Strzok's anti-Trump sentiment as shown through his text messages prove that he was unfit for his position, while many have also said that the hearing yesterday was chaotic and too politically charged. 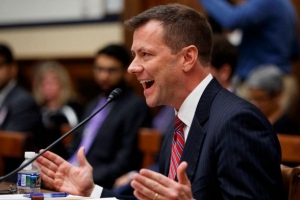 U.S. House members proved Thursday that they are more interested in political posturing and getting on TV with fiery soundbites than in fact-finding, as they questioned FBI official Peter Strzok about

President Donald Trump may be out of the country, but Robert Mueller's investigation into possible ties between the Trump campaign and Russia grinds on. And Thursday was a fairly dramatic day on multiple fronts.

Thursday’s chaotic hearing was revealing, but not in the way the GOP wanted.

President Donald Trump announced in a tweet Wednesday that he has granted his first national security adviser, Michael Flynn, a "full pardon," wiping away the...

Hate crimes have surged nearly 20 percent during the administration of President Donald Trump, according to a new FBI report on hate crime statistics. The...

Hate crime murders surged to a record high in 2019 and overall hate crime incidents also rose, according to annual data released Monday by the FBI. Data...

The FBI said Sunday that its San Antonio office is investigating an incident after video was taken of a caravan of Trump supporters surrounding and then...

Iran is behind threatening, spoofed emails sent to voters, the officials said, but there was no indication that any votes themselves had been altered. Iran...

U.S. hate crime incidents increased 2.7% last year, rising to their highest level in more than a decade, the FBI says in a new report. There were 7,314 hate...

MORE THAN SEVEN years have passed since Ross Ulbricht was arrested in the science fiction section of a San Francisco library and charged with running the...

Iranian influence specialists are behind threatening emails sent to voters in Alaska and Florida, U.S. officials said on Wednesday evening and suggested that...

On Tuesday, Fox News reported that “The FBI is in possession of the laptop purportedly belonging to Hunter Biden which contained emails revealing his foreign...

American Jews were the religious group most targeted by hate crimes in 2019, the FBI reported Monday, facing more than 60 percent of anti-religious bias...

Former FBI Deputy Director Andrew McCabe told a Senate committee on Tuesday that he would not have signed an application for a warrant to surveil a former...

The FBI reportedly opened an investigation in December 2019 into "Hunter Biden and his associates." The bureau was previously reported to have tagged the...

Hunter Biden under criminal investigation according to FBI

Amid the Biden family corruption scandal, the Department of Justice confirmed that Hunter Biden and his business associates are under active investigation by...