A shipment of 78,000 pounds of baby formula arrived in Indianapolis, Indiana on Sunday — the first delivery from “Operation Fly Formula,” the Biden administration’s attempt to curtail the formula shortage.

Agriculture Secretary Tom Vilsack told reporters on Sunday that the shipment, which arrived on a military plane from Germany, contained “very specific and specialized formula” for “moms and dads who have children who have allergies where the regular formula just simply will not work.” White House officials told CNN (Left bias) that the first formula shipments would go to hospitals, doctors, home health care facilities and pharmacies in regions “where the needs are most acute.”

Discussing the shipment with CNN’s “State of the Union” on Sunday, National Economic Council director Brian Deese called for “more competition” in the formula market, “so that no individual company has this much control over supply chains.”

Coverage was widespread and mostly balanced across the spectrum. Some coverage from the right, like in Washington Examiner (Lean Right bias), framed the story around the first shipments not going to stores. 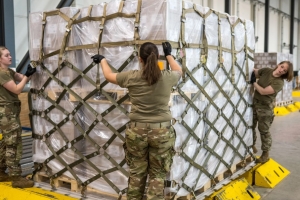 The first flight from Operation Fly Formula landed in Indianapolis, Indiana, on Sunday with enough specialty infant formula to fill more than half a million baby bottles.

The flight was greeted by U.S. Secretary of Agriculture Tom Vilsack upon arrival.

All formula pallets have been fully loaded onto FedEx trucks, but first comply with stringent Food and Drug Administration regulatory requirements. After the FDA clears the product, it will become available publicly for parents, caregivers and health care professionals. 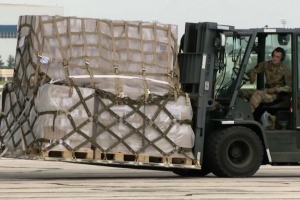 A shipment of 35 tons of baby formula has arrived Sunday in Indianapolis on a US military aircraft from Germany to address a nationwide shortage.

The prescription formula will be distributed to areas around the country where there is the most acute need, a Biden administration official earlier told CNN. But the official said none of the first shipment would land on store shelves in the US, adding that Sunday's shipment is hypoallergenic and will be fed to babies intolerant of protein in cow milk. 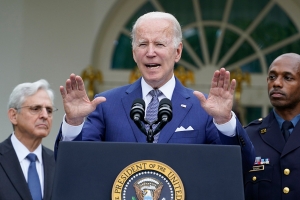 More than 70,000 pounds of baby formula was flown to Indianapolis, Indiana, Sunday from Europe.

"Folks, I’m excited to tell you that the first flight from Operation Fly Formula is loaded up with more than 70,000 pounds of infant formula and about to land in Indiana," President Biden tweeted Sunday. "Our team is working around the clock to get safe formula to everyone who needs it."