Why Is There a Baby Formula Shortage, and What’s Being Done About It?

Over 40% of baby formula products were out of stock at U.S. retailers in early May, on average. How did this happen, and what’s being done about it?

The shortage stemmed from broad supply chain disruptions and the closure of a major formula production plant. Top formula producer Abbott Laboratories shut down its Sturgis, Mich. factory in February after at least two infants died of bacterial infections linked to the plant. Abbott denied any link to the infections, but the factory had still not been reopened by mid-May.

The formula shortage was quickly politicized, especially after Rep. Kat Cammack (R-Fla.) released photos of a migrant processing facility stocked with several boxes of formula. Meanwhile, Abbott began shipping formula to the U.S. from Ireland, and the company said Friday that it could reopen the Sturgis plant “within two weeks” if the FDA gave its approval. While FDA officials said they were “doing everything in our power” to resolve the crisis, bipartisan criticism of the shortage led the House Oversight committee to launch an investigation.

Coverage across the spectrum attributed the shortage primarily to the Abbott factory shutdown. Right-rated outlets tended to focus more on the migrant processing facility formula; Fox News (Right bias) prominently tweeted a quote asking, “Why are we feeding illegal babies ahead of American babies?” Coverage from the left tended to criticize the right’s purported “faux outrage” over feeding migrants’ babies. 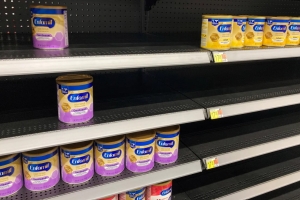 Baby formula has been running low all over the United States, threatening the health of infants and other people who depend on it for their sustenance.

Experts say this is the worst formula shortage in decades. It’s also the latest example of how the US health system’s failures consistently fall hardest on people with complex medical conditions and people who are socioeconomically disadvantaged. 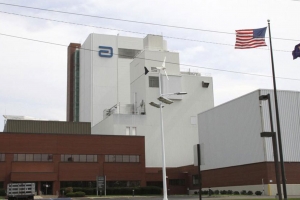 Former FDA Associate Commissioner Peter Pitts said Thursday that while formula manufacturer Abbott is responsible for nationwide shortages by failing to safely maintain their factory, the FDA can have better protocols to handle major production shutdowns.

"That plant needed to be shut down," Pitts said on "Fox & Friends." "The FDA has been 24-7 on-site since February with Abbott to get this plant back online." 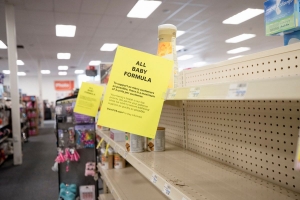 U.S. government efforts to help companies ramp up production and increase imports from abroad should dramatically ease the baby formula supply shortage within weeks, the head of the Food and Drug Administration said on Friday.

Analysis
Who's Really To Blame for Inflation?
Reason