Learn more about Right ratings
Go to Daily Mail
No Paywall
Our records indicate that content from this source is free to access. If this is incorrect, please email us to let us know.
Contents

Daily Mail is featured on the AllSides Media Bias Chart™.

Daily Mail is a news media source with an AllSides Media Bias Rating™ of Right.

The Daily Mail was rated Right by people across the political spectrum in the Aug. 2022 Blind Bias Survey.

On average, respondents who self-identified as being on the Right rated the Daily Mail as Lean Right. Respondents in all other bias categories – Left, Lean Left, Center, and Lean Right – rated it as Right.

A total of 771 people from across the political spectrum rated the bias of the Daily Mail. The weighted average was 3.73, which is in the Right category. The middle 50% of responses lied between 1.88 (Lean Right) and 5.42 (Right) – an interquartile range of 3.54. 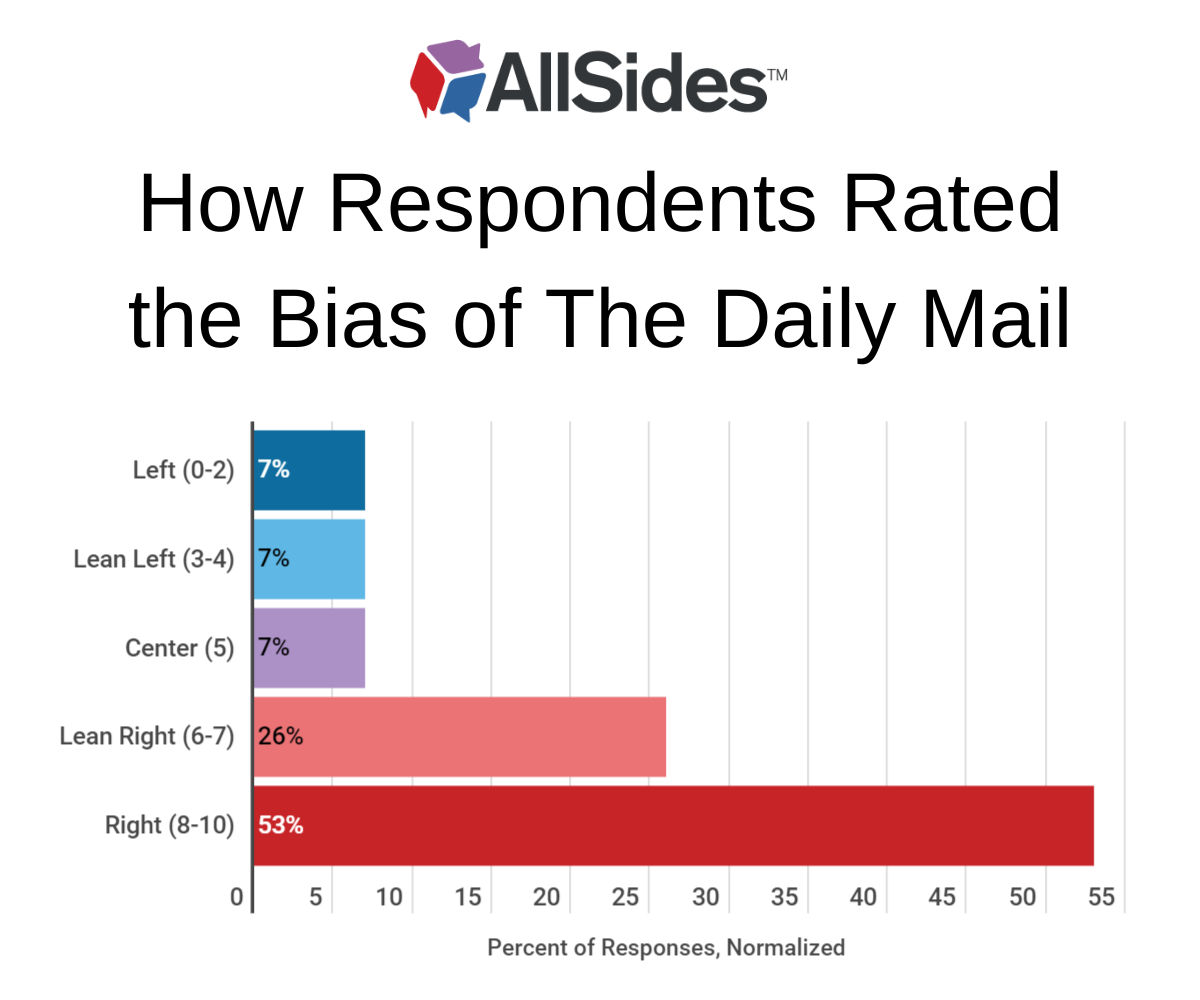 During an August 2021 Independent Review, an AllSides editor noted the Daily Mail has a sensationalist, tabloid bent, often choosing to highlight individual stories that elicit shock or heightened emotions.

As of January 2023, people have voted on the AllSides Media Bias Rating for Daily Mail. On average, those who disagree with our rating think this source has a Center bias.

As of May 2017, a slight majority of AllSides users who voted on the Right rating agreed. Of those who disagreed, the average rating was on the cusp between a Lean Right and Right bias rating.

As of January 2023, AllSides has low or initial confidence in our Right rating for Daily Mail. If we perform more bias reviews and gather consistent data, this confidence level will increase.

The Daily Mail is a British daily tabloid newspaper with much of its coverage about entertainment and pop news, and politically is a traditional supporter of Conservatives. It also considers BBC News to have a left bias. It is owned by the Daily Mail and General Trust and is published in London. It was first published in 1896 by the Harmsworth brothers, Alfred and Harold. It is the United Kingdom's second-largest selling daily newspaper after The Sun. In its founding, the Daily Mail was aimed at the literate lower-middle class and had a high volume of advertising revenue.

Daily Mail is owned by Daily Mail and General Trust or DMGT. Lord Rothermere, Jonathan Harmsworth is the chairman of the Board of Directors of DMGT.

NewsJanuary 13th, 2023
'It was just a really, really weird time for everyone': Biden staffers packing up files in his office were worried about TRUMP'S arrival, new report claims after aides were interviewed in the classified documents case
Daily Mail