Kyle Rittenhouse Found Not Guilty on All Charges

Eighteen-year old Kyle Rittenhouse was found not guilty of all charges Friday after pleading self-defense in fatal shootings during a night of racial justice protests and violent riots in August 2020.

Rittenhouse shot and killed two men and wounded a third amid chaos in Kenosha, Wisconsin following the police shooting of Jacob Blake. He was charged with two counts of homicide, one count of attempted homicide and two counts of recklessly endangering safety, and faced life in prison if convicted of the most serious charge. The jury seemed to agree with Rittenhouse's self-defense claim in shooting the men, who appeared to attack or point guns at him in videos viewed by jurors. The decision followed nearly a week of deliberations, mistrial requests and other courtroom controversies.

The case and trial divided media across the spectrum. Some voices on the left have framed the judge as biased; accused the right of glorifying violence; or argued that anything short of a guilty verdict would represent racial inequality. Voices on the right often criticized the prosecution's case and the politicization of the trial; accused mainstream media of bias against Rittenhouse; and condemned efforts to pain Rittenhouse as a symbol of violent prejudice. Some voices also defended Rittenhouse's actions. Coverage from left- and center-rated outlets often described the events of August 2020 as unrest or protests; some also focused on the observation that the jury was mostly white. Reports from right-rated sources often described the events in Kenosha as being violent. 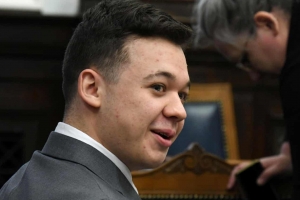 A jury on Friday found Kyle Rittenhouse not guilty on charges related to his shooting dead two people at an anti-racism protest and injuring a third in Kenosha, Wisconsin last year, after a tumultuous trial that gripped America.

Rittenhouse killed Joseph Rosenbaum, 36, and Anthony Huber, 26, and wounded Gaige Grosskreutz, 27, when he shot them with an assault rifle as he roamed the streets of Kenosha with other self-described militia during protests in August 2020, after a white police officer shot a Black man, Jacob Blake, in the back.

The trial was seen as... 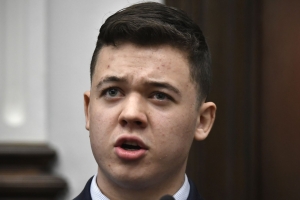 A jury on Friday found Kyle Rittenhouse not guilty on all five counts in the 2020 fatal shooting of two men in Kenosha, Wisconsin.

Driving the news: Defense lawyers argued Rittenhouse acted in self-defense when he shot and killed Joseph Rosenbaum and Anthony Huber and injured Gaige Grosskreutz, in Kenosha in August 2020.

Rittenhouse initially faced six counts, but the presiding judge dismissed the possession of a dangerous weapon by a minor charge ahead... 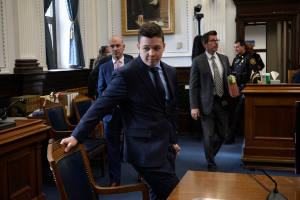 Jurors in Kenosha, Wisconsin, on Friday declared Kyle Rittenhouse not guilty on all counts, capping off an intense trial surrounding the deadly unrest in that city last summer.

Rittenhouse, 18, would have faced a mandatory life sentence if found guilty and convicted of first-degree intentional homicide.

The verdict came on the fourth day of deliberations and 15th day of the trial.

An Informer Told the FBI What Docs Trump Was Hiding, and Where
Newsweek