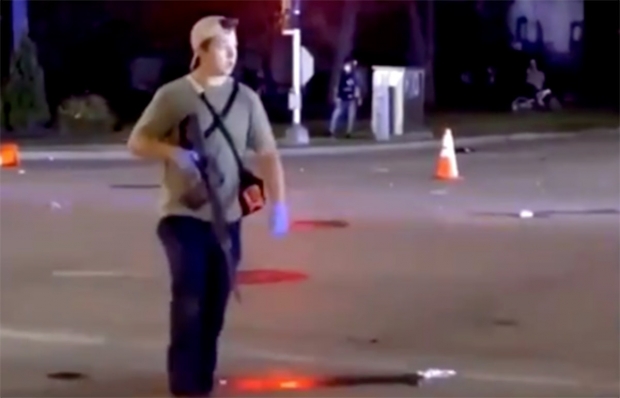 Seventeen-year-old Kyle Rittenhouse has been charged with fatally shooting two people during nighttime civil unrest on Tuesday following the officer-involved shooting of Jacob Blake in Kenosha, Wisconsin. Videos of the incident circulated online almost immediately after it occurred, and media bias by omission was on display in some reports.

Bias could be seen on both sides, with both the left and right media painting a slightly different picture of the incident and shooter. They each included, emphasized, or omitted certain details based on their own apparent political biases.

The Washington Post (Lean Left bias) explained the incident in the following way:

Shots were fired around 11:45 p.m. Tuesday, police said. After the first shots, a young White man carrying a rifle began running north on Sheridan Road, away from a crowd of protesters.

Video shows the armed man [Rittenhouse] fall to the ground and then fire multiple rounds into the crowd. Two more people fell to the ground, one shot in the arm and the other in the chest, the Milwaukee Journal Sentinel reported. Another graphic video shows a man with blood running down the back of his neck and bystanders shouting that he had been shot in the head.

A Washington Post journalist who observed the scene saw the man with the rifle run by with a few protesters in pursuit after gunfire erupted about a block away. He tripped and fell, rolled into a sitting position, raised his gun and opened fire at his pursuers.

This description doesn’t appear to tell the full story. Videos of the incident are very graphic, but are easily found on social networking sites. Some YouTube users posted videos dissecting the incident from every angle.

AllSides reviewed the videos, and found many media outlets, including Washington Post, omitted that Rittenhouse’s pursuers appeared to have been throwing objects at him, attempting to kick his face, hit him with heavy objects, and may even have been armed themselves.

Footage first appears to show Rittenhouse in a parking lot, running from a man who is chasing him and throwing objects at him. Rittenhouse opens fire on the man, who falls to the ground, bleeding from his head. Rittenhouse then attempts to call someone. A voice can be heard saying, “Get that mother******!” Rittenhouse runs out of the parking lot.

In what appears to be the next video, taken from a different angle, Rittenhouse can then be seen running down the street with many people in pursuit. Someone hits him in the back of the head. He continues running, then trips and falls onto his back. Someone yells, “Get his a**!” Multiple people run toward him. One of them jumps up and appears to extend his foot over Rittenhouse’s head, as if to kick his face; Rittenhouse fires. A man holding a skateboard runs at Rittenhouse, who shoots him. Another man approaches Rittenhouse, pauses, then lurches forward; Rittenhouse shoots him in the arm. Photos circulating on social media appear to show the man shot in the arm was carrying a pistol at the time he approached and afterward. Some Twitter users also shared photos appearing to show another man who ran toward Rittenhouse while he laid on the ground was holding a gun, and that the man with the skateboard was hitting him with it.

While the Post’s description isn’t technically inaccurate, it is one-sided and slightly spun, omitting key details such as the first shooting and descriptions of the behavior of his pursuers. Saying Rittenhouse simply fell and fired multiple rounds into a crowd doesn’t tell the whole story; much more was going on.

The Associated Press (Center bias, though borderline Lean Left) also omitted many of these details in its article on the incident, which focused heavily on the fact that Rittenhouse appeared to support law enforcement.

Right-rated outlets such as The Daily Caller also noted that Rittenhouse supported law enforcement, but provided more details of the incident than Washington Post, including full videos of the shootings and that Rittenhouse was being chased.

Brietbart’s coverage (Right bias) of the incident omitted the specific details of the shootings. It did include a photo of Rittenhouse cleaning graffiti from the Kenosha County Courthouse earlier in the day. Breitbart also included a tweet from a reporter who had interviewed Rittenhouse just prior to the incident and said Rittenhouse “did not make racist comments, condemn #BLM, or mention political motivations for his actions.”

All of these media outlets omitted details about the first shooting in the parking lot, while all of them also mentioned that armed civilians were present that night with the stated aim of protecting property and businesses to fill a void created by law enforcement.

Plenty of commentary about the incident is flying around social media, with some people arguing protesters were motivated to chase Rittenhouse because of the first shooting in the parking lot in order to subdue him, and others arguing Rittenhouse was being repeatedly pursued and physically attacked, so he acted in self-defense. It’s up to the courts to decide if Rittenhouse was acting in self-defense or breaking laws, not the media or the court of public opinion — but reporters should at least give the full details to avoid charges of bias.

As the media has become democratized and everyone with a cell phone has been empowered to post and review videos, increasingly we’re seeing both kangaroo courts and heightened criticism of established media institutions for bias, including ignoring key details, spinning stories in one direction, or omitting what some see as important context (such as blocks of burned out buildings).

With a majority of Americans reporting they see a “great deal” or “fair amount” of bias in media coverage, it requires reading much more critically and deeply, across the political spectrum and across multiple sources, to get the full picture and think for yourself. Brevity will always be important and journalism will always require trade-offs, but with political polarization in the U.S. so high, media outlets ought to paint the full picture. When they don’t, it’s even more important to use tools like AllSides to get multiple angles.