Ghislaine Maxwell, alleged accomplice in Jeffrey Epstein's sex trafficking ring, was arrested by the FBI in New Hampshire on Thursday. Maxwell, who had been hiding out in a luxury, million-dollar home since Epstein was arrested last year, was charged with multiple crimes including conspiracy and enticing minors to engage in sex. She remains in federal custody as she awaits trial in Manhattan.

Coverage from all sides of the political spectrum highlighted the reportedly critical role Maxwell played in recruiting and grooming Epstein's victims, as well as the extravagance of the home she was hiding out in. Many also speculated that, given Epstein's suicide last year, others involved in the sex trafficking ring will try to silence Maxwell. In anticipation of this, the Twitter hashtag #MaxwellDidntKillHerself trended in California on Thursday.

From the Left
8144
Sexual Misconduct
Was Ghislaine Maxwell hiding out at this $1 million home paid for in cash?
NBC News (Online) 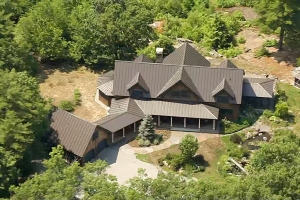 Before Jeffrey Epstein's confidant Ghislaine Maxwell was arrested Thursday, she was hiding out at a 156-acre property in rural New Hampshire that was paid for in cash through a limited liability company, according to federal prosecutors.

The description matches a luxury home purchased last year for $1 million in a deal shrouded in secrecy, according to two people familiar with the transaction.

The home on East Washington Road in Bradford was bought in December through a limited liability company, Granite Reality LLC, set up the previous month, records show. The...

Maxwell, who was arrested Thursday morning in New Hampshire, waived her right to a bail hearing there in a brief videoconference in federal court in Manchester on Thursday.

Jeffrey Epstein’s victims have another shot at justice. Here’s hoping they get it.

Her guilt, in the court of public opinion, isn’t in question.

The only question is: Will the federal government keep Maxwell alive to stand trial?

Latinas Are Opening Up On Instagram About Why They Didn’t Report Their Sexual Assault And The...

TRIGGER WARNING for victims of assault. Recently we came across six stories by women who opened up about why they didn’t report their sexual assault via the...

Megan Thee Stallion was mocked after being shot. As she reclaims the narrative, Black women...
ANALYSIS

Since the release of her self-assured mix tape “Fever” last May, Megan Thee Stallion has ascended to a level of fame that is rare for emerging rappers — and...

A trove of court documents unsealed Thursday night appear to show that the late, accused sex trafficker Jeffrey Epstein was in contact with his now-charged...

A federal judge has unsealed hundreds of pages of deposition transcripts and other documents related to a now-settled defamation suit brought against Ghislaine...

WASHINGTON (AP) — Nearly 1 in 4 employees at the Department of Veterans Affairs say they have been subjected to unwanted sexual comments and other harassment...

CHICAGO (AP) — The baseless conspiracy theory took off after an anonymous user posed a bizarre question in an internet chatroom: What if retail giant Wayfair...

She Said Her Husband Hit Her. She Lost Custody of Their Kids

Tara Coronado, a 45-year-old mother of four, sat in a nondescript Austin courtroom six years ago during a custody fight with her ex-husband, biting her tongue...

The Marshall Project
Family and Marriage

“I have never been in a more hostile, manipulative, passive-aggressive environment … and I worked in politics.” That’s Julia Payne, a former vice president...

Sen. Josh Hawley Says He 'Took on an Asian Trafficking Ring' and 'Freed a Dozen...

When Missouri police raided several Springfield massage parlors in 2017, as Sen. Josh Hawley (R–Mo.) tells it, it was a righteous rescue mission led by a...