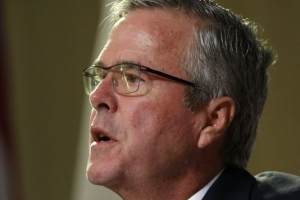 Jeb Bush says he's not reducing his presidential campaign, he is simply refocusing it with an eye toward the early caucus and primary states.

"We've made an adjustment in our campaign," Bush said Saturday before conducting a town hall in the pivotal state of South Carolina. "That's what leaders do."

Stumping the Palmetto State a day after his campaign announced staff reductions and pay cuts, Bush dismissed critics who said the changes reflect a struggling campaign that is losing ground to any number of rivals.

Republican presidential candidate Jeb Bush is slashing his campaign budget with across-the-board pay cuts and other changes, overhauling an operation that started as a political juggernaut but now may need to stay lean to survive.

The one-time GOP front-runner has seen his political momentum undercut by outsider candidates Donald Trump and Ben Carson, who now lead in most polls, relegating the former Florida governor to the middle of the pack.

In a bid to recalibrate its strategy and operations, the Bush campaign plans to cut its budget by... 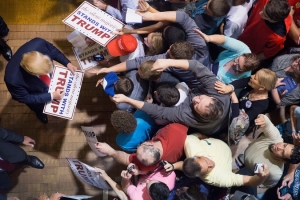 With Hillary Rodham Clinton emerging as the unrivaled leader in the Democratic contest, the unruly Republican presidential field suddenly seemed to lack a center of political gravity on Friday, leaving party strategists and voters to fear a long nomination fight that could end with a damaged standard-bearer facing a more unified left.