The family of the suspect in the Highland Park, Illinois Fourth of July shooting had complained to police about his behavior in the past.

21-year-old Robert Crimo was detained and charged with seven counts of first-degree murder for the shooting that left seven dead and dozens injured. Police said Tuesday that in April 2019, they were notified by Crimo's family that he threatened to take his own life, and that in September 2019, family members told them that "Crimo was going to kill everyone." Sixteen knives and other weapons were then confiscated from Crimo's home, but no firearms were found. Police said that "At that time, there was no probable cause" to arrest him, and that his family members didn't sign off on formal complaints.

Three months later, Crimo successfully obtained a Firearm Owners Identification card (FOID). Police said that "there was insufficient basis to establish a clear and present danger and deny the FOID application." Crimo then passed four background checks between 2020 and 2021, and legally purchased five firearms, including the suspected murder weapon. The situation has led to scrutiny of Illinois' red flag laws, which seek to confiscate firearms from people deemed dangerous by police or their family members.

Crimo's history and the efficacy of red flag laws were the top story across the political spectrum Wednesday. 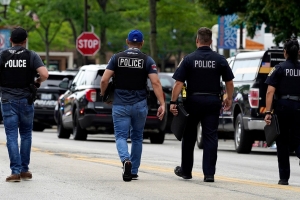 The suspect in the Highland Park, Illinois, Fourth of July mass shooting was flagged by police as a "clear and present danger" in 2019, authorities said Tuesday.

Robert "Bobby" E. Crimo III, 21, the suspect in the mass shooting that killed seven people and wounded dozens of others at a Fourth of July parade, was still able to clear state-required background checks to purchase firearms on at least four separate occasions between 2020 and 2021, the Illinois State Police said.

"In September 2019, ISP received a Clear and Present Danger report on... 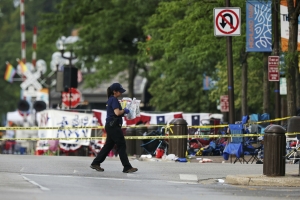 A portrait of Robert “Bobby” E. Crimo III as a mysterious and music-obsessed loner began emerging Tuesday, a day after he was arrested in the wake of a mass shooting at a July Fourth parade that left seven dead and traumatized an affluent Chicago suburb.

Crimo, 21, who attempted to disguise himself by wearing women's clothing during the deadly rampage, aspired to be a rapper and his music got darker and more delusional as he got older and relationships with his parents and a girlfriend frayed, former friends said. 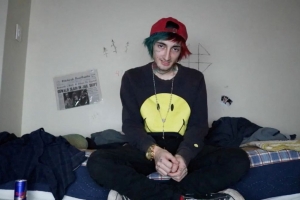 The man charged with killing seven people at a Chicago-area July Fourth parade slipped past the safeguards of an Illinois "red flag" law designed to prevent people deemed to have violent tendencies from getting guns, officials revealed on Tuesday.

The disclosures raised questions about the adequacy of the state's "red flag" laws even as a prosecutor lauded the system as "strong" during a news conference announcing seven first-degree murder charges against the 21-year-old suspect, Robert, E. Crimo III.