On Monday, a gunman killed seven people and injured dozens more at a Fourth of July Parade in Highland Park, Illinois.

Multiple news sources indicated that a person of interest, 21-year-old Robert Crimo, had been detained but not charged as of Tuesday morning. Police say the gunman appeared to randomly open fire while standing on a rooftop, and that the high-powered rifle gunshots were initially mistaken for fireworks. The holiday attack was the latest mass shooting in a recent string that included the murder of 21 people at an elementary school in Uvalde, Texas and the racially-motivated murder of 10 people at a supermarket in Buffalo, New York.

President Joe Biden said that he and First Lady Jill Biden were “shocked by the senseless gun violence that has yet again brought grief to an American community on this Independence Day.” On June 25, Biden signed the widest-ranging gun safety legislation passed by Congress in decades, which includes enhanced background checks and increased funding for school safety and red-flag laws.

Sources across the spectrum highlighted the shooting and the alleged shooter's background. Updated 7/6/22 at 11:16 a.m. with updated death toll. 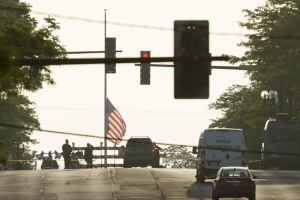 A shooter fired on an Independence Day parade from a rooftop in suburban Chicago, spraying the crowd with gunshots initially mistaken for fireworks before hundreds of panicked revelers of all ages fled in terror. At least six people were killed and at least 30 wounded.

An hourslong manhunt during which residents hunkered down in businesses or received police escorts to their homes ended with a traffic stop and brief chase Monday evening, when authorities detained a man they described as a person of interest. They gave no motive for the attack in... 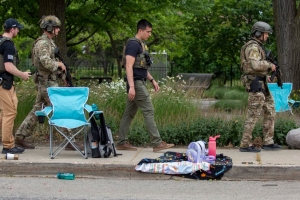 Authorities detained a person of interest in the deadly Fourth of July parade shooting Monday evening in Lake Forest, Illinois.

Police detained 22-year-old Robert E. Crimo as a person of interest in the deadly massacre after a brief pursuit, authorities said. A Chicago police officer spotted Crimo and attempted to perform a traffic stop when the 22-year-old fled, authorities said, according to CNN. Crimo, who goes by the name “Bobby,” was believed to be armed and dangerous at the time he was taken into custody.

At least six people were killed and dozens of others... 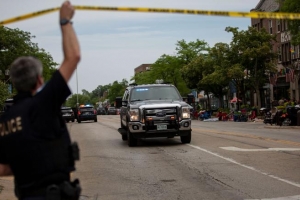 A day of national celebration turned to tragedy Monday when a gunman killed six people and injured dozens more at a July Fourth parade in Highland Park, Illinois -- leaving the nation grieving yet another mass shooting.

The suspected shooter, identified by authorities as Robert E. Crimo III, used a "high-powered rifle" in an attack that appeared to be "random" and "intentional," police said. They believe the shooter, who was apprehended later Monday, climbed onto a rooftop of a business and opened fire on the parade about 20 minutes after it started.