The California bills were approved on a near-party-line vote, with one Democrat joining Republicans in opposition. One of the bills included a provision modeled after Texas’ abortion ban, allowing private citizens to sue distributors of assault weapons and “ghost gun” kits.

The legislation came amid a national conversation on gun control following the deadly Texas shooting. In Texas, where the GOP holds a legislative majority, top Republicans accused Democrats of “politicizing” the shooting; state Attorney General Ken Paxton, who won a runoff primary against George P. Bush on Tuesday, called for “law-abiding citizens” to be “armed and trained so that they can respond when something like this happens.” Senate Majority Leader Chuck Schumer appeared to downplay the possibility of a national gun control bill on Wednesday amid opposition from Republicans like Sen. Ted Cruz (R-Texas), saying, “Americans can cast their vote in November.”

Coverage of gun control’s opponents and advocates was widespread across the spectrum on Wednesday in connection with the Uvalde school shooting. Some coverage from both sides highlighted prominent figures’ statements; however, some coverage from the left criticized outlets like Fox News (Right bias) for purportedly not taking gun control advocates seriously. 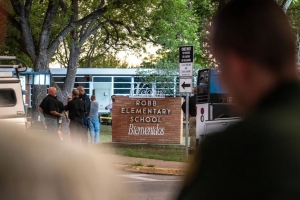 In the hours after a gunman killed more than 20 people at a South Texas elementary school Tuesday, the state’s top Republicans sought to immediately squelch the possibility of gun control measures in the wake of yet another mass shooting.

As the death toll mounted from the shooting at Robb Elementary in Uvalde and President Joe Biden vowed to push for stricter gun laws, Texas Republicans made it clear that any kind of gun restriction in response to the tragedy was off the table. 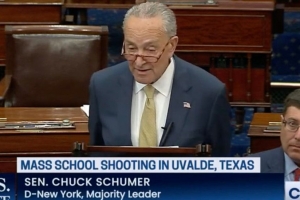 Senate Majority Leader Chuck Schumer indicated Wednesday that Democrats will not rush anti-gun legislation after the mass shooting at a Texas elementary school because Republican support is unlikely.

While speaking on the floor of the Senate, Schumer said Americans are fearful of sending their children to school, and they will have to decide whether to reject the “Republican guns at all costs doctrine” in the November midterms, according to CSPAN’s transcript of Schumer’s speech. 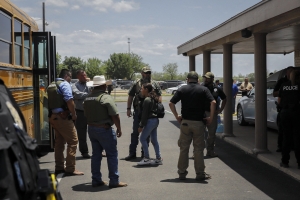 As news traveled around the country Tuesday of a mass shooting at a Texas elementary school that left at least 22 dead — including 19 children, two teachers and the 18-year-old gunman — California lawmakers were advancing a package of gun control bills, including one sponsored by Gov. Gavin Newsom that co-opts the structure of Texas’ abortion ban to crack down on illegal firearms.