‘The volunteers saved Evia’: How grassroots fought the Greek fires

Environment, Media industry, Greece
Save for Later
From The Center 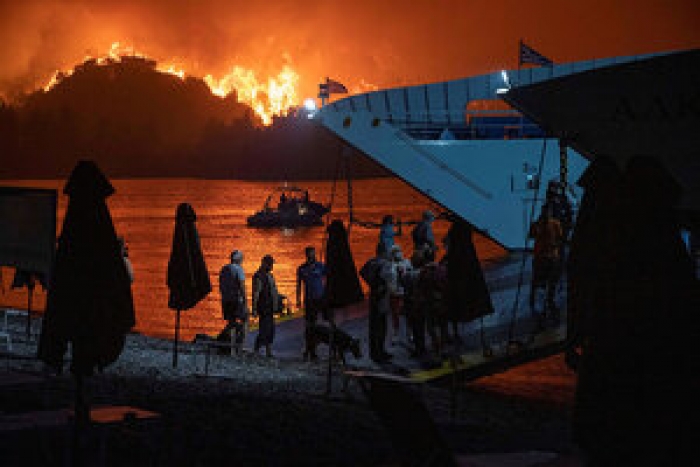 Volunteers were the first – and at times only – line of defense against the wildfires that engulfed the Greek island of Evia this week, leaving charred olive trees in a sea of ashes.

Some were brave local youth. Others came from other parts of the country, shocked into action by the inadequacy of the government response as it scrambled to fight an unprecedented number of fires across multiple fronts, including the capital, Athens.

Wherever they came from, the volunteers, as well as grassroots support from nearby cities and towns to get supplies into fire-stricken areas, have helped save lives and property from roaring blazes across the island, located just northeast of Athens. The destruction the fires caused is nonetheless catastrophic for many living on Evia, especially in its heavily wooded north. But the actions of volunteers helped prevent loss of life and keep a bad situation from becoming that much worse.

There was no loss of life reported on Evia from the fire that broke out on Aug. 3 and continued to smolder through Thursday. A sinister smoke hung over the small western port of Aidipsos early Wednesday as firefighters and volunteers from other parts of Greece arrived to help Evia.

The blaze had spared the port, an important entry point to the island, but consumed more than 110,000 acres just beyond. Some villages continued to burn, adding to the bitterness of residents who say the government prioritized fighting a wildfire at a large forest near Athens and allowed the fires on Evia to grow into a huge front that was impossible to battle.

Known for its fierce winds that stayed mercifully calm in recent days, the island’s north boasted beautiful pine forests that went up in flames all the same, along with vineyards and olive groves. Thousands of residents work either in small honey or resin production facilities. Resin production alone brings approximately €5.5 million ($6.45 million) every year for north and central Evia, since resin is used as an ingredient in the production of glues, acrylic paint, and dentures. Other residents depend on tourism.

Soccer coach Vaggelis Bekakos of the seaside town of Limni is full of praise for the locals who rose to the occasion and helped fight off the flames. Among them are young men on his team, including a civil engineer who still keeps watch overnight on rooftops to ensure there isn’t a resurgence of fire. “The volunteers saved Evia because there was no one there to help,” he says.

After the fierce wildfires of 2016, says the coach, residents of Limni created a volunteer corps of firefighters and rescuers who received proper training. They are bound by an oath to drop their day jobs and serve any time that there is a fire alert. Mr. Bekakos credits their heroic acts to save the town – broadcast on national TV – with inspiring villagers in other parts of the island to also fight the flames, rather than flee.

“We were asking the fire service to spray some water on a house that was beginning to burn and they would answer, ‘We have no such order. Our order is to evacuate the people, not to spray water,’” he recalls, channeling a common frustration over the government strategy that prioritized saving lives. Many feel the large-scale losses on Evia were avoidable.

The government “sent an evacuation message to hide behind an excuse: ‘I warned you to leave and you decided to stay. ... If you get burned, get burned alone because the state cannot protect you,’” says Mr. Bekakos.

Greece had to battle nearly 600 fires in the span of just eight days, issuing 65 evacuation alerts and evacuating 63,000 people, according to Nikos Hardalias, the deputy minister of crisis management. “What I know is that the choices we made saved lives,” he told journalists on Tuesday. “We didn’t underestimate any fire. ... We had to deal with a situation that was unique for the fire service: 568 fires!”

Greek Prime Minister Kyriakos Mitsotakis on Thursday said the wildfires that devastated the nation for more than a week represented the greatest ecological disaster in decades and showed the “climate crisis is here.” Firefighters from 24 European and Middle Eastern nations came to provide assistance. One civilian died, along with a volunteer firefighter, compared with more than 100 people in the fires in the Attica region three years ago.

“We managed to save lives, but we lost forests and property,” Mr. Mitsotakis said. “What we see today is what was burned, but we do not see what was saved. Thanks to the superhuman efforts of both the firefighters and the volunteers and the citizens themselves, countless houses have been saved.”

“I wanted to help”

Five days after the start of the fires, Marinos, a native of the southern part of Evia who now studies in Athens, went with his friends to the scorching north because there appeared to be no government effort to bring the flames under control.

“We took branches from trees to hit the flames until they died,” says Marinos, who didn’t give his last name. “Later a man came from the village with his car, carrying the watering tank he uses for his vines. We used that water too. We used anything we could find.”

Marinos was among those volunteering on Wednesday near the village of Gouves, one of many that almost burned down. A man of few words, Marinos says that he had experienced firsthand the importance of solidarity in 2019. His house almost burned down but didn’t – thanks to helping hands that came from the north of the island.

“Nothing resembles what happened here,” he says. “It’s not only the houses, it’s the forest. Their whole life is now in the past. What can they do after this?”

Maria Papadopoulou, a native of Athens, has devoted days to delivering food and water packages to those in need, shuttling villagers to safety, and rescuing and feeding the few animals that survived the inferno. She agrees that the loss of the forest is a huge problem. “The forest and the animals are gone forever,” she says. “In a few days, all the volunteers will leave and the people of the villages will be really alone then. They will continue to live in this huge cemetery.”

Ms. Papadopoulou is among dozens of volunteers who sacrificed summer vacation to volunteer on the island. Relief efforts across the country have mobilized a broad range of civil society actors, running the spectrum from churchgoers to left-wing anarchists. Giorgos Tsapourniotis, the mayor of Limni, had to issue a statement asking people to stop sending supplies because warehouses were full.

Kostas, a native of Thessaloniki who declined to give his full name, arrived on the island on Monday and plans to stay put until the very end of his holidays. “I wanted to help,” says the first-time volunteer. “I couldn’t stand watching it in the news. I saw the people fighting alone and I knew I could help physically. I just couldn’t watch anymore without doing something.”

On arrival, he says, he and a friend went straight to one of the villages that they had seen was in trouble and helped people extinguish a fire in their backyards. On Wednesday, in the town of Istiaia, Kostas was focused on delivering food where needed, undeterred by the stifling blanket of smoke on the island.

Read full story
Some content from this outlet may be limited or behind a paywall.
Environment, Media industry, Greece