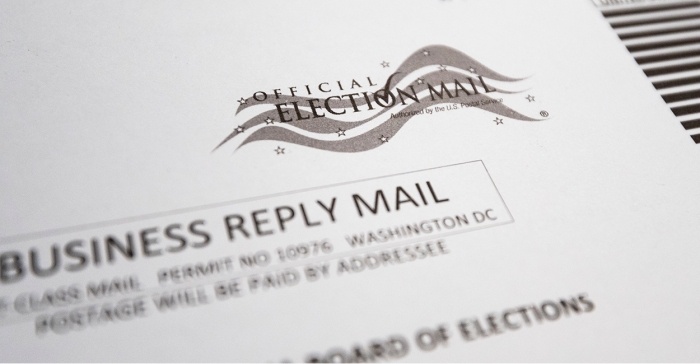 New York City residents have reported receiving ballots with wrong information, sparking confusion and a response from the city board of elections department.

Multiple voters who live in Brooklyn have reported errors—including a wrong name on their ballot envelope—which would invalidate their ballots, according to Gothamist. The error was due to an “outside vendor error,” the New York City Board of Elections said Monday in a tweet instructing residents on what steps to take if they encounter the error.

NEWS
Is ranked-choice voting a better way to decide elections?
Yahoo! The 360

Can people carry guns into polling places? You might be surprised

Growing activity from armed far-right groups and President Trump’s calls for his supporters to watch polling places “very carefully” have raised concerns of...

Election officials in the presidential battleground state of Pennsylvania must accept mail ballots that arrive up to three days after the election under an...

How Texas Republicans Paved the Way for Their Own Demise
ANALYSIS

THE REPUBLICAN TAKEOVER of Texas was gradual. First came the shocking upset of populist Democratic Gov. Ann Richards in 1994, who was upset by the party boy-...

Poll: 92% of battleground state voters are "extremely motivated to vote"

91% of likely voters nationally say they are "extremely motivated to vote," including 92% in battleground states Arizona, Florida, Michigan, North Carolina,...

Is ranked-choice voting a better way to decide elections?

For all the complexity that surrounds how American elections are carried out, the way votes are cast is almost always extremely simple: One person, one vote....

Most voters expect intimidation at the polls. But they’re voting in record numbers

While many states are expecting record-breaking turnout in the 2020 presidential election, more than two-thirds of registered voters think there will be some...

A Colorado trailer park landlord is warning tenants of huge rent increases if Joe Biden is elected president, telling them that “everything you do and have to...

Democrats in Sacramento have been rewriting election laws to help their party “ballot harvest.” But now Republicans have figured out how to play the same game...

The Supreme Court on Monday refused a Republican request to block an extended period for counting ballots in Pennsylvania, allowing mail-in ballots received up...

Hundreds of Thousands of Mailed Ballots Could Be Rejected

There is growing concern that hundreds of thousands of mail-in ballots for the November election could be rejected because of voter error. According to NPR...

Pence on Peaceful Transfer of Power: ‘If We Have a Free and Fair Election,’ We’ll Have ‘Confidence...