The Justice Department has put to death Daniel Lee, 47, marking the first federal execution in 17 years, just hours after the Supreme Court ruled 5-4 against a last-minute attempt to halt the execution.

Lee had been convicted of killing three people, including a child, as part of a broader racketeering scheme to fund a white supremacist cause. He had waited more than 20 years on federal death row in Terre Haute, Indiana. 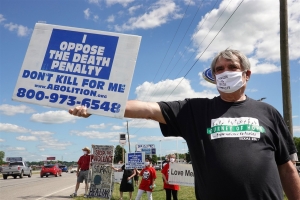 The U.S. carried out the first federal execution in 17 years at a prison in Indiana after a 5-4 Supreme Court ruling cleared the way.

Daniel Lewis Lee, who was convicted of killing an Arkansas family in a plot to establish a whites-only nation, was executed by lethal injection early Tuesday at the Federal Correctional Institution in Terre Haute.

The U.S. government carried out the first federal execution in nearly two decades on Tuesday.

“I didn’t do it,” Lee said just before he was executed, according to the Associated Press. “I’ve made a lot of mistakes in my life, but I’m not a murderer. ... You’re killing an innocent man.”

Lee was a member of a white supremacist group who murdered a family of three, including an 8-year-old girl, according to the Justice...

Daniel Lewis Lee on Tuesday became the first federal prisoner executed in over 17 years, just hours after the Supreme Court ruled 5-4 against a last-minute attempt to halt the execution.

Lee, 47, a former white supremacist convicted of killing a family of three in 1996, was executed by lethal injection at the federal prison in Terre Haute, Ind., and pronounced dead at 8:07 a.m., according to the Bureau of Prisons (BOP).

“You’re killing an innocent man,” Lee said with his final words, according to a reporter with the Indianapolis...

President-elect Joe Biden is signaling that he’s ready to move quickly with nominating judges once he’s sworn into office. And he specifically wants Democratic...