President Trump has threatened to withhold federal funding from Michigan and Nevada, after absentee ballot applications were sent to all Michigan voters, and a mail-in primary election is being held in Nevada in June.

Trump is charging that the moves are illegal and will enable voter fraud. Many Democrats support mail-in voting as a way to ensure that ballots can be cast safely during the coronavirus pandemic. 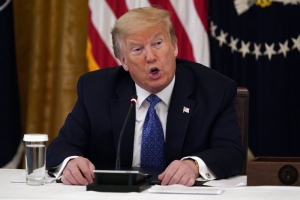 President Donald Trump threatened Wednesday to hold up coronavirus relief money for Michigan after he said — erroneously — that the state had sent absentee ballots to millions of voters. It’s not clear that he can do so.

Michigan mailed applications for the absentee ballots, not the ballots themselves.

“Michigan sends absentee ballots to 7.7 million people ahead of Primaries and the General Election,” Trump tweeted Wednesday. “This was done illegally and without authorization by a rogue Secretary of State. I will ask to hold up funding to Michigan if...

President Trump threatened to withhold funding from Michigan after he alleged that the state sent absentee ballots to all registered voters.

"Breaking: Michigan sends absentee ballots to 7.7 million people ahead of Primaries and the General Election," the president tweeted Wednesday morning. "This was done illegally and without authorization by a rogue Secretary of State. I will ask to hold up funding to Michigan if they want to go down this Voter Fraud path!" 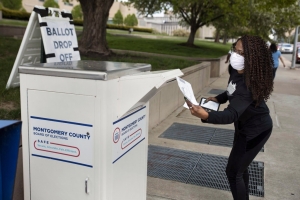 President Trump threatened to withhold federal funding for Michigan and Nevada if the states moved forward in expanding vote by mail.

President Trump on Wednesday incorrectly accused Michigan’s Democratic secretary of state of mailing ballots to all of the state’s registered voters, falsely claiming that it was illegal, as he escalated his assault against mail voting.

The president also threatened to withhold federal funds to Michigan and Nevada if the states proceed in expanding vote-by-mail efforts.

“Michigan sends absentee ballots to 7.7 million people ahead of primaries and the general...

Hundreds of thousands of Hong Kong citizens queued to cast ballots over the weekend in what the Chinese-ruled city’s opposition camp says is a symbolic protest...

Why did liberals win so many cases before a conservative Supreme Court?
ANALYSIS

Last October, when the Supreme Court began its term, liberals had good reason to be despondent. The Court’s most recent term, which ended Thursday, was the...

Will 458,000 Vote-By-Mail Ballots Go To Californians Who Have Died Or Moved? Experts Are Skeptical
FACT CHECK

California plans to send all active registered voters a mail-in ballot ahead of the November election, a move the state’s top elections official says is meant...

Can Trump's anti-mail-voting crusade hurt him in key states?
ANALYSIS

MOSCOW — Russian President Vladimir Putin appeared to have secured his political future on Wednesday with 78 percent of votes counted supporting a...

SC will pay postage for all mail-in ballots in November

The Hill
Technology
Biden and Trump Agree: November Election Could Be Corrupt
ANALYSIS

President Donald Trump and his challenger, Joe Biden, have found something they agree on: The November election could be rife with corruption because of how...

After a string of recent successes, advocates for improving the fairness of elections and expanding access to voting amid the coronavirus pandemic have...

Thousands of Mail-In Ballots Rejected for Coming Too Late

At least 65,000 mail-in or absentee ballots already have been rejected in this year's primary elections because they arrived past the deadline or contain other...

In their cynical attempt to rewrite the rules of the 2020 election, Democrats are ignoring distinctions between absentee ballots and universal mail-in voting...

Democrats are worried about mail-in voting too
ANALYSIS

President Trump and his Republican allies have trashed Democratic efforts to make voting by mail easier in the United States amid the COVID-19 pandemic, but...