People have taken to the streets nationwide in reaction to a leak that suggests the Supreme Court plans to overturn Roe v. Wade.

Activists have organized protests and rallies outside the Supreme Court and other federal courthouses across the country. Some activists are also reportedly planning protests at the homes of conservative Justices Amy Coney Barrett, John Roberts, Samuel Alito, Brett Kavanaugh, Clarence Thomas and Neil Gorsuch. One group has called for a "Mother's Day Strike" to start next week, in which women would refrain from "all economic activity." The D.C. Police Department built fencing around the Supreme Court building this week in preparation for more protests this weekend.

News coverage from sources on the left and right has highlighted the new fencing around the Supreme Court and the protests prominently, including one in Los Angeles that led to clashes between protesters and police. Reports from right-rated sources continue to focus more on the leak and framing it as a crime potentially driven by leftist political agendas. Some reports from the right highlighted the apparent plan to stage protests outside the homes of justices; few reports from the left covered this. Coverage from left-rated sources instead tends to highlight voices who express concern for women's rights if the court overturns Roe, especially racial minorities and low-income individuals. 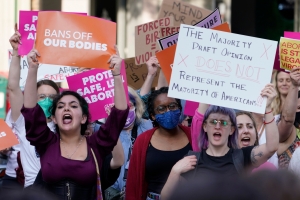 With the Supreme Court poised to overturn abortion protections, people took to the streets in cities across the country to protest for the right to safe, accessible abortion care for all.

Within hours of Politico’s reporting on a leaked draft Supreme Court opinion on Monday, people flooded the steps of the Supreme Court in Washington, D.C., protesting against the court’s apparent plan to overturn the landmark abortion protections of Roe v. Wade.

By late Tuesday, hundreds more had gathered outside the nation’s highest court.

Queer activists — whose rights to same-sex marriage and consensual sex are also... 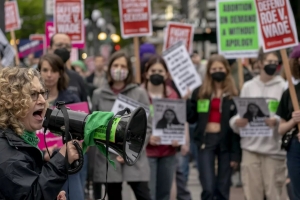 Some social media users frustrated with the recent leaked opinion from the Supreme Court regarding the potential overturn of Roe v. Wade have called for a Mother's Day Strike.

On Tuesday a leaked draft opinion showed the Supreme Court was preparing to strike down Roe v. Wade, the 1973 landmark ruling that guarantees abortion rights.

Such a bombshell ruling could instantly make abortion illegal in at least 13 states with legal access to abortion varying widely across the country.

Following the leak, many people took to the streets to protest outside the Supreme Court in Washington. And now, multiple people...

Read full story
Some content from this outlet may be limited or behind a paywall.
See full media bias rating for Newsweek
From the Right
280
Abortion
Liberal group calls for protests at conservative Supreme Court justices' homes
Fox News (Online News) 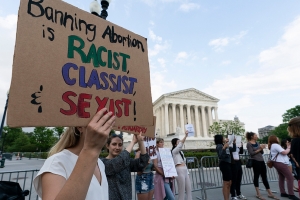 The activists are organizing under the moniker "Ruth Sent Us" and have published the supposed home addresses of Justices Amy Coney Barrett, John Roberts, Samuel Alito, Brett Kavanaugh, Clarence Thomas and Neil Gorsuch.

"Our 6-3 extremist Supreme Court routinely issues rulings that hurt women, racial minorities, LGBTQ+ and immigrant rights," the group's website reads. "We must rise up to force accountability using a...