Tensions Grow as US, Russia Meet About Ukraine

As key diplomats from the U.S. and Russia meet Friday, fears are growing about a potential Russian invasion or attack on Ukraine.

U.S. Secretary of State Antony Blinken held talks with Russian Foreign Minister Sergei Lavrov Friday aimed at curbing a potential invasion. Blinken said the U.S. would mount a "united, swift and severe response" if Russia attacks Ukraine; roughly 100,000 Russian troops are gathered near the Ukrainian border. Moscow denies planning an attack and is reportedly concerned that Western powers are threatening Russia’s security. Ahead of the meeting, the U.S. said NATO allies in Europe could provide additional arms to Ukraine. Biden said in a press conference Wednesday that "It’s one thing if it’s a minor incursion and then we end up having a fight about what to do and not do," a quote that raised questions about how the U.S. and allies would respond to an attack. Ukrainian President Volodymyr Zelenskyy tweeted in response that "there are no minor incursions and small nations." Biden clarified Thursday that a Russian military offensive would prompt "a severe and coordinated economic response" from the U.S.

The Russia-Ukraine situation has been covered prominently across the spectrum. Coverage from many sources, especially right-rated ones, tended to highlight Biden's "minor incursion" remark and its potential consequences. 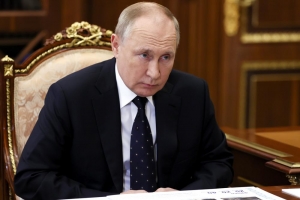 Short of an all-out invasion, Russian President Vladimir Putin could take less dramatic action in Ukraine that would vastly complicate a U.S. and allied response. He might carry out what President Joe Biden called a “minor incursion” — perhaps a cyberattack — leaving the U.S. and Europe divided on the type and severity of economic sanctions to impose on Moscow and ways to increase support for Kyiv.

Biden drew widespread criticism for saying Wednesday that retaliating for Russian aggression in Ukraine would depend on the details. “It’s one thing if it’s a... 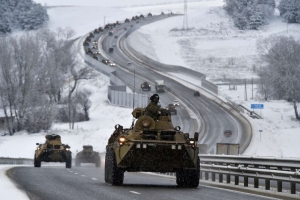 Ahead of a key meeting on Friday between the U.S. and Russia, the Biden administration on Thursday pushed a full-scale campaign to pressure Moscow as Russian leader Vladimir Putin weighs a possible attack on its neighbor Ukraine.

The U.S. approved its NATO allies in the Baltics to provide additional arms to Ukraine, including critical anti-aircraft missiles that escalate U.S. support. The U.S. Treasury sanctioned four Ukrainian officials it accused of working with Russian intelligence, including to form a new government backed by Russian occupying forces. The State Department blasted a... 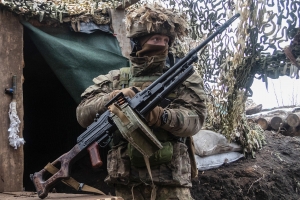 Senate Republican Minority Leader Mitch McConnell said Thursday the US should arm Ukraine, a day after President Joe Biden’s remarks raised questions about an international response to a Russian invasion.

Biden seemed to imply during a news conference on Wednesday that the US and its allies might not be unified in response to Russia if it attacks Ukraine in “a minor incursion.”

The comments, which the president and White House sought to clarify amid backlash, served as a signal to Russia that it was okay to “take some” of Ukraine, McConnell said on...